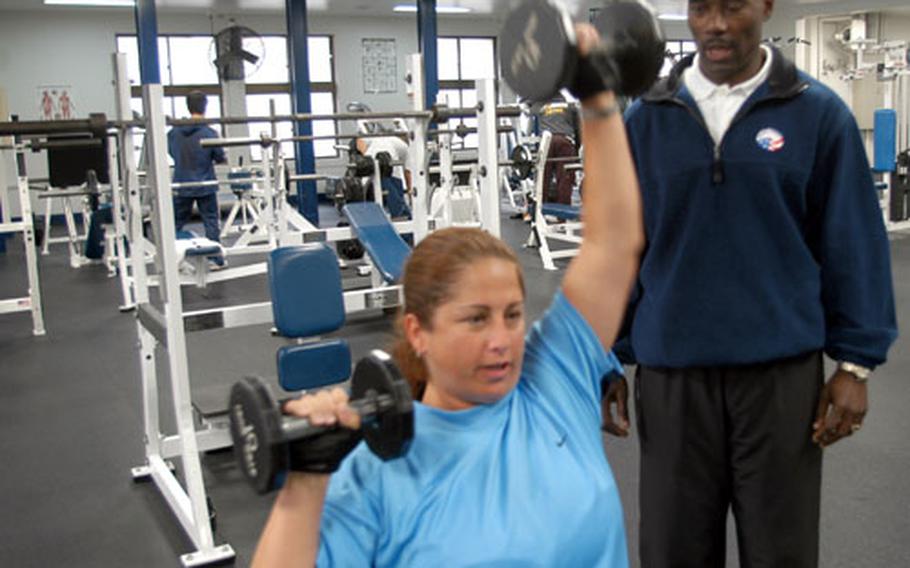 MISAWA AIR BASE, Japan &#8212; A recent programs and contracts review at the Potter Fitness Center resulted in changes that left some gym-goers miffed.

A popular instructor had to stop leading his lunchtime &#8220;Ab Blast&#8221; workout and six personal fitness trainers were removed due to lack of approved fitness certifications.

&#8220;Nobody got hurt,&#8221; said Maj. Tim Sites, 35th Services Squadron commander. &#8220;But we needed to stay in compliance with Air Force instruction to make sure the right kind of training and the right classes were happening in our facility.&#8221;

Perhaps the most noticeable change to this month&#8217;s fitness-class schedule was the removal of instructor Gilbert Moss. In November, he was on the schedule more than any other instructor, with at least one group class every Monday to Saturday.

His noon abdominal class packed about 35 to 40 students, said Air Force spouse Jackie Alexander, a former student of that class who uses Moss as a personal trainer. &#8220;Active duty, spouses, (Department of Defense Dependents Schools) teachers &#8212; it affected everybody,&#8221; she said of the class&#8217; demise.

Moss also was an afternoon total-body-workout instructor. After leading group fitness classes for about a year, he was told in November he&#8217;d have to stop at the end of the month because he lacked group-instructor certification, he said. But he was current on CPR training and carried personal liability insurance plus his personal-trainer certifications.

Moss was the only group instructor affected by the compliance review, said Jason Vandenberg, fitness center director. An evaluation hadn&#8217;t been done in some time because the fitness center lacked a director for most of 2005, base officials said.

A new fitness director was getting the program back on track and &#8220;as part of a general, normal review,&#8221; Sites said, &#8220;we&#8217;re required to re-validate everybody.&#8221; Some of the personal trainers didn&#8217;t have approved fitness certification, he and Vandenberg said; others were using the gym to solicit customers without working through fitness-center staff.

That&#8217;s all since changed: The three fitness center-recommended personal trainers now advertised are contract employees that charge a standard fee of $25 per hour, Vandenberg said.

Moss, who has about 15 clients, is one of the fitness center-recommended trainers. He&#8217;s certified through American Fitness Professionals and Associates (AFPA) and the International Fitness Professionals Association (IFPA) as a personal trainer. Those certifications aren&#8217;t recognized by the Air Force, he said, but &#8220;they&#8217;re basically the same.&#8221;

He was permitted to keep seeing clients as a personal trainer. But to continue, he&#8217;ll have to take the Air Force-backed Aerobics and Fitness Association of America $350 certification course for personal fitness trainers when it&#8217;s offered at Misawa this spring.

In the meantime, he&#8217;s waiting to see whether he&#8217;ll be able to resume teaching his group classes after completing an online certification class; it&#8217;s one not recognized by the Air Force but Moss said he was told it would suffice until he took the $220 certification course to conduct primary group exercise, also being offered in April at Misawa.

Vandenberg said Wednesday &#8220;it looks like his class will be put on [the schedule] in the near future. We&#8217;re waiting for some feedback from the Air Force.&#8221;