Review board is major step toward release 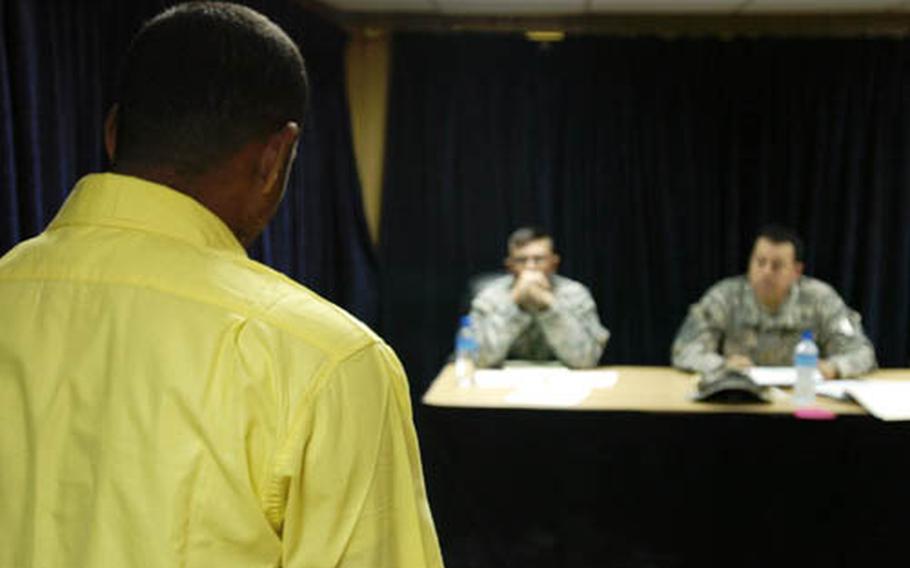 A detainee at Camp Cropper pleads his case to a review committee board earlier this year. The boards make a recommendation on whether detainees continue to pose a security threat. Their decisions on recommending release must be ratified by higher officials. (Courtesy U.S. Army)

A detainee at Camp Cropper pleads his case to a review committee board earlier this year. The boards make a recommendation on whether detainees continue to pose a security threat. Their decisions on recommending release must be ratified by higher officials. (Courtesy U.S. Army) 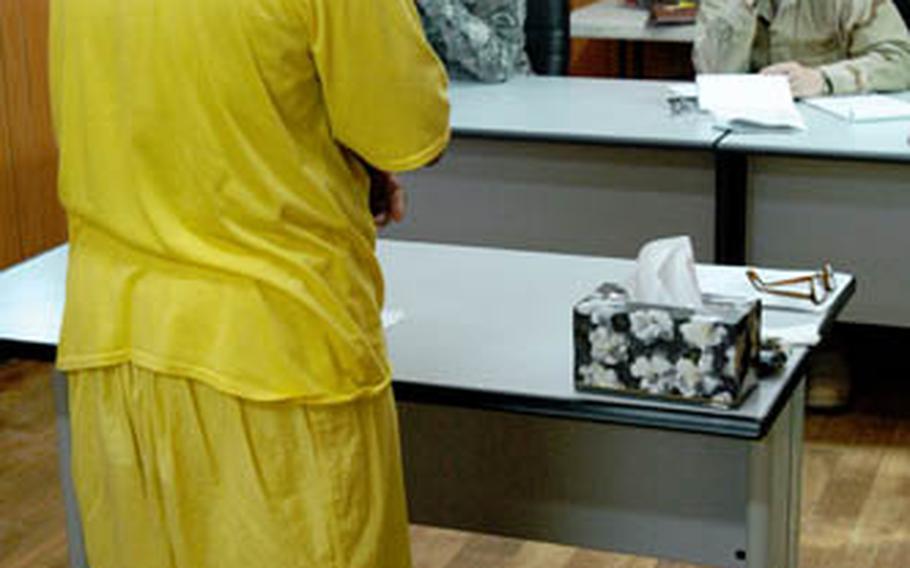 A detainee at Camp Cropper pleads his case to a review committee board earlier this year. (Brandon Hubbard / U.S. Army)

CAMP CROPPER, Iraq &#8212; Though the air conditioning in the wood-paneled trailer shields him from the searing heat outside, the man is sweating.

Known by the second half of his detainee number &#8212; 815 &#8212; the man knows this is his only chance in the next six months to plead his case, to ask for release. After all, he&#8217;s been through the U.S. military detention system before.

"This is your second time captured, right? There seems to be a bit of a pattern here," says the Army major conducting the man&#8217;s review and release board. "If you get released, how will you avoid getting caught a third time?"

The detainee flashes a glimpse of a sheepish smile.

"I will try to stay away from the wanted men. I will try to do only my work. I will open up a store and take care of my family."

As the U.S. military works toward a professed goal of releasing ever more of the detainees it holds in Iraq, this scene is played out again and again each day in front of what are called "Multinational Force Review Committee Boards."

On this day, the board members are an Army major, a Navy chief petty officer and an Air Force captain. The major has done nearly 100 review boards. The captain is a legal officer with about 75 under his belt. The chief is sitting on the board for the first time.

These three men make a recommendation on whether detainees are set free, though only a portion of those who earn a "release" vote are actually let go.

"We focus not so much on what got him here, but on right now, is he a continuing security threat," said Air Force Capt. Dylan Imperato, who helps conduct the review boards. "There&#8217;s a natural tension between the capturing unit and the review board."

The boards at Cropper vote for release around 65 percent of the time, Imperato says. The actual number of releases is much lower.

Indeed, capturing units are allowed what is essentially an appeal that can override the board&#8217;s decision. If they can present compelling reasons why a certain detainee should not be released, that can sway the final approval process.

Detainee 815, a Sunni from the northern city of Mosul, is accused of being a pledged member of the Islamic State of Iraq, a terrorist group. He allegedly was a payroll and food administrator. He was a former paratrooper, a specially trained soldier in Saddam&#8217;s army. He has all of the training to be a formidable insurgent.

But in this setting, he is simply a slightly balding man of medium height and build, with a mustache, wearing a long white top and the yellow pants of the detainee uniform. On this day, he has a rather unusual advantage: one of his interrogators is here to testify on his behalf and ask for release. Most of the hearing is translated for him.

"I realize he&#8217;s made mistakes and that he&#8217;s been arrested a second time," the soldier, in an Army uniform sanitized of any patches, says. "Through his actions, he&#8217;s led to the capture of several high-value targets in Mosul. His actions have endangered him and his family."

The detainee has been "checked out" several times and taken on operations, the soldier says. He&#8217;s earned his release. There are questions from the panel &#8212; along with an un-translated exchange about false promises made to the detainee to secure his cooperation.

"I was wrong. And they were wrong. These people want nothing but destruction," the detainee says, explaining his decision to cooperate.

In the end, the board votes to free the man.

"I hope that you put your change of heart to good use when you go back to Mosul, or wherever you go," the board chairman says.

The detainee is led back out of the trailer into the stifling heat. Another is brought in. He is sworn in on a copy of the Quran.

Court rulings about Gitmo do not impact Iraq detaineesThree Supreme Court rulings have dealt blows to the U.S. military detention system at Guantanamo Bay, Cuba. The latest decision, handed down on June 12, declared that detainees indeed have certain legal rights under the U.S. Constitution.

So, if foreigners captured overseas and held in custody on a U.S. base overseas are given legal rights in one instance &#8212; Guantanamo &#8212; why not in a seemingly similar situation in Iraq?

Additionally, there was a lesser-noted Supreme Court ruling, also on June 12, dealing with U.S. detainees in Iraq. In that case, the court unanimously held that two U.S. citizens held by American forces in Baghdad could not challenge their detention in a U.S. court.

The justices found that the men have no standing because they are being held abroad by a multi-national force. They can, if deemed appropriate, be handed over to the Iraqis for trial. A similar challenge by detainees was mounted in British courts, and also rejected, in 2006.

What happens to detainees if the U.N. resolution expires and no security agreement or status of forces agreement is reached?

That "is speculation and can only be resolved as the [government of Iraq] and the U.S. work out these issues," said Lt. Col. Ken Plowman, a spokesman for Task Force 134, which handles detainee operations in Iraq.