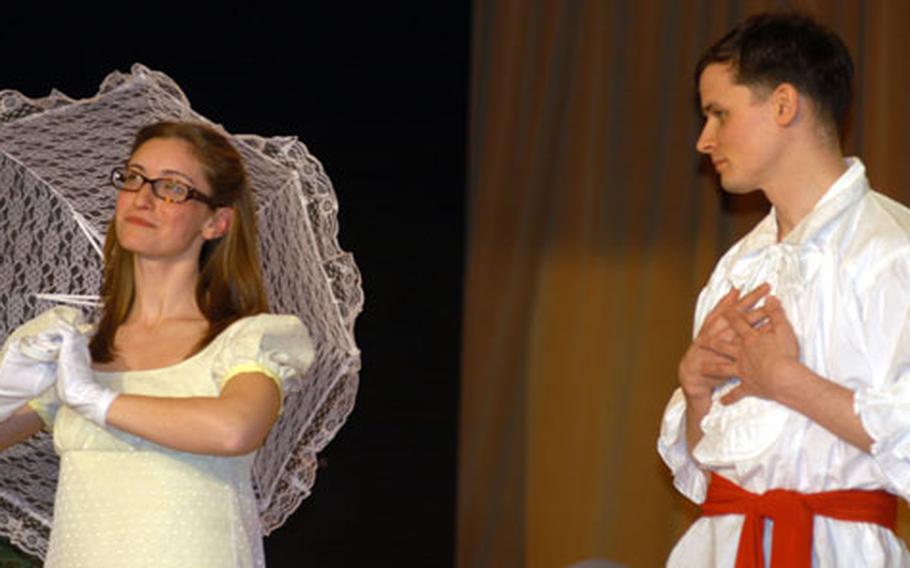 The Mokuteki Theatre Group, formerly the Misawa Theatre Guild, puts on its first post-change performance this weekend, &#8220;The Pirates of Penzance.&#8221; Once a private organization, the base&#8217;s community theater group now falls under the Mokuteki Community Center.

The Gilbert & Sullivan musical comedy tells the story of a young pirate apprentice named Frederic who, at the end of his indentured period, finds out he was indentured by mistake.

Petty Officer 1st Class James Stilipec, 33, is in his first starring role as Frederic. He&#8217;s had to learn more than 20 songs and stretch his vocal cords for the part.

The lead soprano belongs to Abigail Corbett, 24, an Air Force spouse, who plays Mabel, a maiden who falls in love with Frederic. Corbett is a classically trained vocalist with a college degree in vocal performance.

The cast and crew number about two dozen, a mix of active-duty members, civilians, spouses and children.

Staff Sgt. Chris Bueno, 32, works in the base hospital&#8217;s medical supply department by day, after hours stepping into the tall shoes of Major-General Stanley, a one-star general in the British army.

Wrede said the two-hour show is appropriate for all ages.

For anyone interested in participating in future community theater events, the theatre group meets at 7 p.m. the last Thursday of each month in the community center ballroom.

No acting experience is necessary. The group also needs set and costume designers.