Returning unit has seen many sides of fight 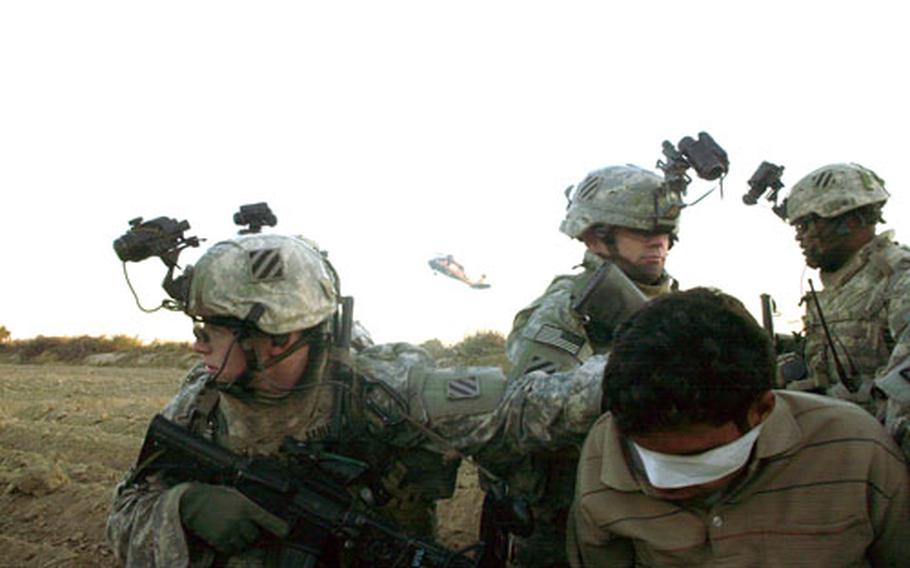 Soldiers from Company B, 1st Battalion, 15th Infantry Regiment hold a prisoner while waiting for a Black Hawk helicopter to land at the end of an air-assault mission south of Baghdad in late November. (Photos by Joseph Giordono / S&S)

Soldiers from Company B, 1st Battalion, 15th Infantry Regiment hold a prisoner while waiting for a Black Hawk helicopter to land at the end of an air-assault mission south of Baghdad in late November. (Photos by Joseph Giordono / S&S) 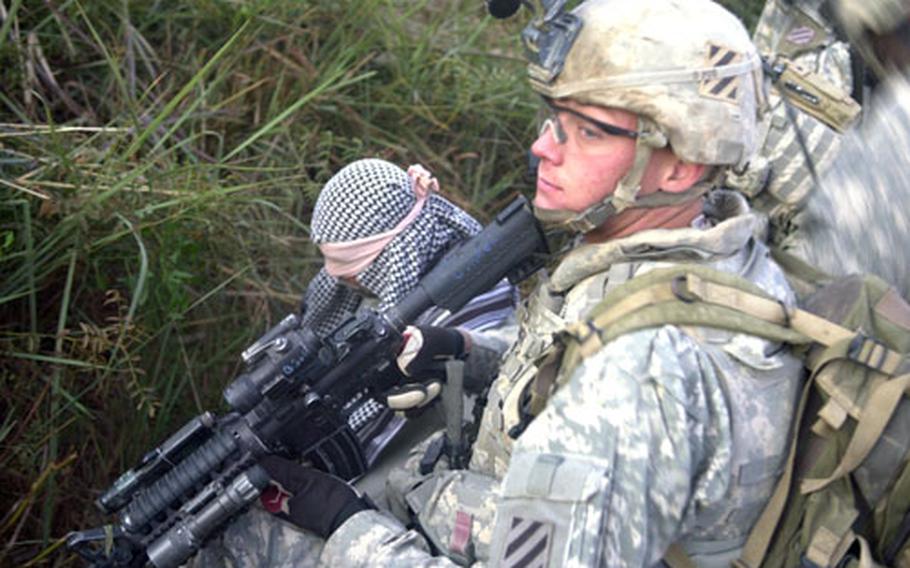 Pfc. Aaron Huinker, of 1st Battalion, 15th Infantry Regiment, guards a prisoner at the end of an air assault mission south of Baghdad in late November. The battalion is on its third deployment in Iraq. () 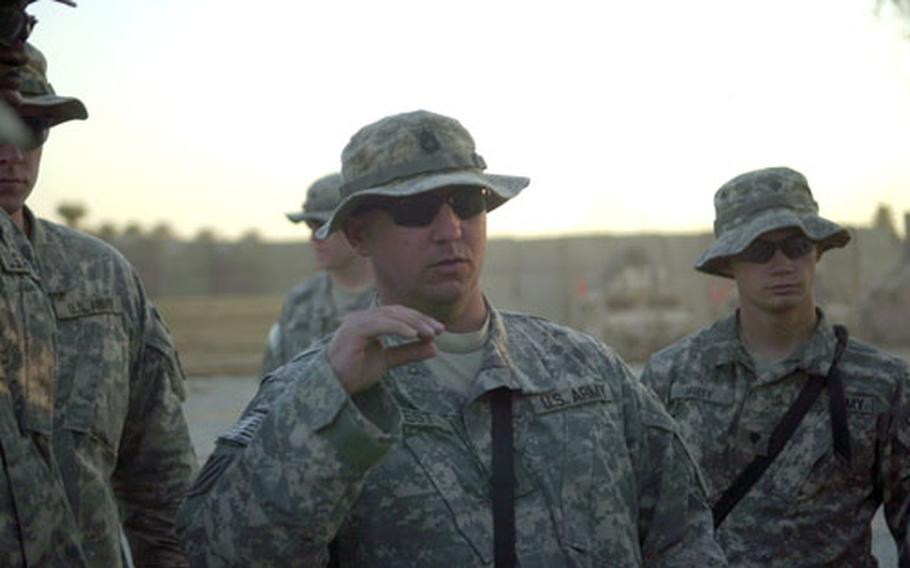 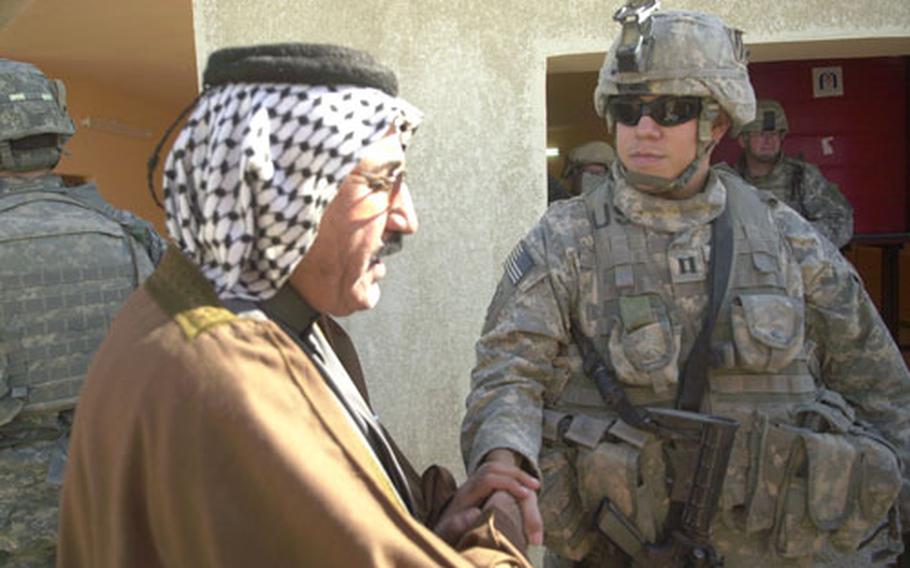 Capt. Matthew Givens, of the 1st Battalion, 15th Infantry Regiment, works with civil affairs teams near Salman Pak. Givens shakes hands with a sheik whose people will be served by a new water pump built by the American military. () 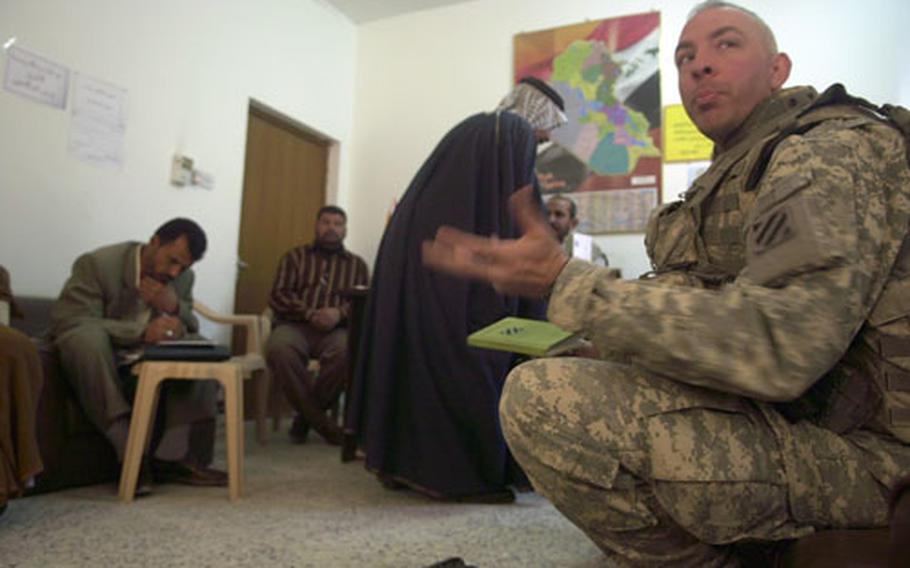 In the early morning light, in the first hours of the Iraq invasion, soldiers of the 1st Battalion, 15th Infantry Regiment were among the first ground troops to cross the border.

As a long column of vehicles rolled through the berm, marking their entry into war, they were greeted by a hand-painted sign placed by engineers who had cleared the lane: &#8220;Welcome to Iraq.&#8221;

Few thought they&#8217;d be there long, and fewer thought they see Iraq again. But as with many units, the battalion &#8212; part of the 3rd Brigade, 3rd Infantry Division &#8212; is now on its third combat tour. And it has seen each major phase of the campaign: the invasion; the move to large, isolated &#8220;Super-FOBs&#8221; while the insurgency grew; and the counterinsurgency &#8220;surge&#8221; this year that has military leaders optimistic about greatly reduced violence.

&#8220;The biggest difference [between the last two tours] is that at the battalion level, we&#8217;ve been relieved of the pressure to immediately begin the transition to Iraqi security forces,&#8221; Lt. Col. Jack Marr, commander of the 1st Battalion, 15th Infantry, said in an interview on Combat Outpost Cleary in late November.

This tour, the battalion is deployed in areas around Salman Pak, a restive town along the Tigris River, south of Baghdad. While other areas have reported marked drops in violence, the battalion here is still facing a very much &#8220;kinetic&#8221; threat.

In April, the battalion pushed into areas U.S. troops had rarely patrolled. They began building and occupying combat outposts, including one fashioned from a long row of shattered Iraqi greenhouses. It was the &#8220;surge&#8221; policy in practice: leaving the larger bases, trading security for a better presence among the Iraqi people.

One outpost in particular, called COP Cahill, has been repeatedly attacked by direct and indirect fire. The troops are still literally clearing their fields of fire.

In eight months, the battalion has conducted nearly 20 air assaults. They&#8217;ve sunk some 80 boats they suspect are used by insurgents to cross from Salman Pak to a sanctuary area on the west bank of the Tigris. They have lost 10 men in combat.

Soldiers say residents around Salman Pak are &#8220;wary&#8221; and in wait-and-see mode. Intimidation by both Sunni and Shiite militants is still common; recently, three Iraqi security force volunteers were kidnapped from their homes and killed.

In some ways, the physical conditions are similar to the days right after the invasion. Chow comes in big green buckets, cooked in mobile kitchens &#8212; not in giant dining facilities on huge bases. The combat outposts are only 100 meters wide at some points. Shower trailers have replaced wooden stalls rigged with water bladders.

But most things are very much different from the first two tours.

In the invasion, it was relatively simple: &#8220;Protect the guys in blue, kill any enemies you could engage,&#8221; said battalion Command Sgt. Major Mark Moore.

In 2005, the battalion was at Forward Operating Base McKenzie, near Samarra. The mission consisted largely of long patrols from the base, and training local security forces.

While combat is the focus of the mission now, the battalion is also working several civil affairs projects. One project involves building eight reverse osmosis drinking water wells in the area, which had seen the beginnings of cholera, said Capt. Matthew Givens, a 1-15 officer attached to a civil affairs team.

One of the wells was dedicated late last month; Givens said the equipment and buildings cost $180,000, a small investment for the good will the project will hopefully generate in the community.

Earlier that same day, a group of soldiers met with city leaders in an area near Salman Pak. They discussed agriculture, &#8220;concerned citizens&#8221; groups and a road project nearing completion. A dispute broke out between city officials and contractors on exactly what the contract required.

After several exchanges and translations, Capt. John Horning spoke up.

SALMAN PAK, Iraq &#8212; There are several soldiers back with the 1st Battalion, 15th Infantry Regiment who were with the unit when it crossed the berm into Iraq in 2003.

But there is at least one, Sgt. 1st Class Cory West, who never left. In fact, West has been with the battalion since August 2000, deploying with the unit on all three of its tours in Iraq.

In the 2003 invasion, West was the gunner for then-battalion commander John Charlton. (Charlton is now a colonel and commander of the 1st Brigade, 3rd Infantry Division in Ramadi.) By 2005, when the unit was stationed near Samarra, West was a platoon master gunner. This time, he is the platoon sergeant for 3rd Platoon, Company B &#8212; known in historical terms as the Audie Murphy platoon.

The 29-year-old West has seen the fight evolve from a &#8220;full conflict, where you knew who the enemy was&#8221; to an escalating battle with makeshift bombs to a true counterinsurgency campaign, with soldiers living out of small combat outposts.

West acknowledges the deployments &#8212; which, between military schooling and training, come with a break of only about a year in between &#8212; have been tough on his family. But, he said, his wife and daughter understand his job. And, if anything from his previous tours can be imparted to one of the younger soldiers on a first deployment, so much the better.