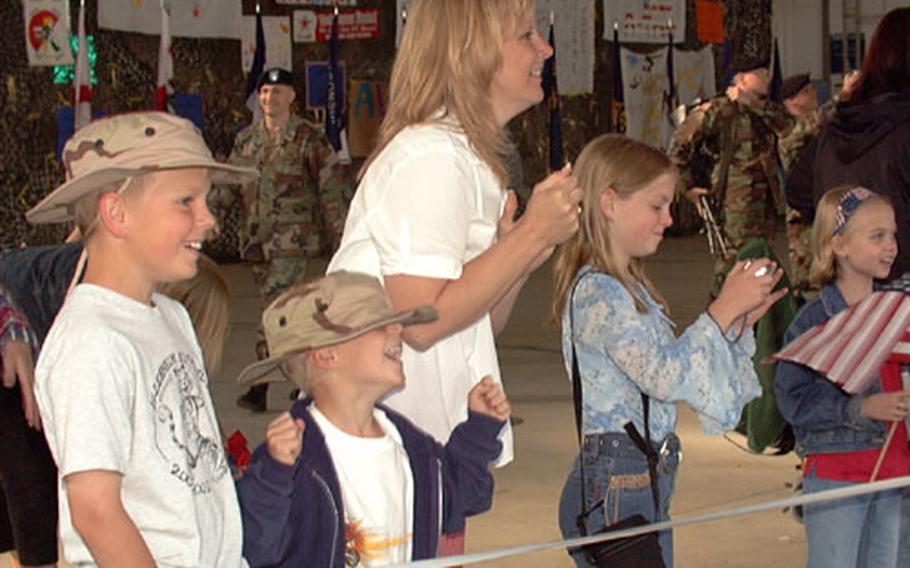 Michelle Beatty and her children, from left to right, Cameron, Jacob and Courtney, cheer at the sight of the soldiers entering the hangar at Storck Barracks in Illesheim, Germany, on Wednesday. (Rick Emert / S&S) 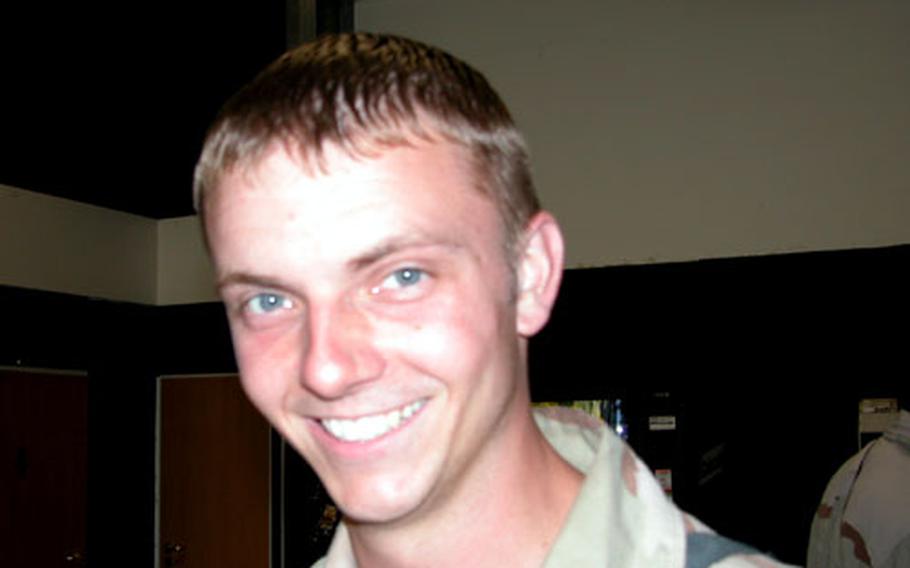 "I&#39;m going to go home, get a good shower and sleep in a soft bed for the first time in a long time." — Sgt. Bryant MacFarlane of Delta Troop, 2nd Squadron. 6th Cavalry Regiment, based in Illesheim, Germany. (Charlie Coon / S&S)

ILLESHEIM, Germany &#8212; The hangar near the 2nd Squadron, 6th Cavalry Regiment headquarters looked like the scene of a high school prom.

Nervous, antsy and excited, about 100 family members stood behind engineer-tape barricades awaiting the return of their husbands, fathers and friends from a seven-month deployment to Iraq.

About 110 soldiers from the 2nd Squadron and the 7th Battalion, 159th Aviation Maintenance Regiment, and the 147th Maintenance Company, were finally coming home.

No doubt more than one of the spouses wondered if the engineer tape, put in place to keep families from running to the soldiers until a short welcome ceremony was over, was enough to keep them back. The deployment had been long and tough for some of the families to deal with.

Laura Lizotte and her 3-year-old daughter, Grace, spent the entire deployment with family in the States.

Lizotte, and several other spouses, said the reports from Iraq by Stars and Stripes reporter Steve Liewer eased their minds.

Lizotte flew space-available into Ramstein Air Base when she learned her husband was returning.

Other spouses stayed in the Illesheim community. Among those was Michelle Beatty, wife of Chief Warrant Officer 2 Brett Beatty, a maintainer with the 2nd Squadron, 6th Cavalry Regiment.

Beatty&#8217;s uncertainty was justified. The Illesheim soldiers were first expected home around May 1.

Several delays pushed the date farther and farther back. Finally, the troops departed the Middle East on May 13. They were due to arrive at Illesheim late that same night, but problems with the plane grounded them overnight in Rota, Spain.

The soldiers were expected to be home Wednesday morning, but the plane was again delayed, and they landed at Ramstein Air Base at about 1:30 p.m. Wednesday.

Four hours later, the troops marched into the hangar to screams, cheers, whistles and sobs from their families and friends.

That engineer tape did hold, although many youngsters leaned over the tape to get a good look at the formation, eyes searching for their fathers amid a sea of desert uniforms.

&#8220;It was an incredible welcome,&#8221; said an emotional Brett Beatty, whose family still clung to him nearly 20 minutes after the ceremony ended.