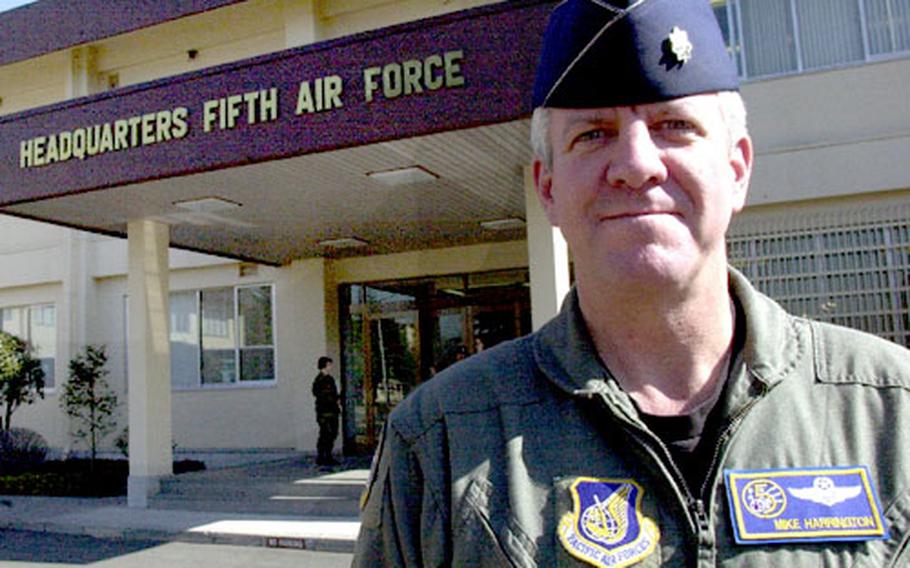 Lt. Col. Mike Harrington, a retired F-16 pilot, is among hundreds who have volunteered to return to active duty in the Air Force. He is stationed at Yokota Air Base in Japan. (Jason Carter / S&S)

YOKOTA AIR BASE, Japan &#8212; After a long career flying F-16s for the Air Force and later DC-9s for Northwest Airlines, Lt. Col. Mike Harrington is back in the military, this time behind a desk.

The chief of the air operations flight, 605th Air Operations Squadron, Harrington is among 170 former Air Force pilots who have returned to active duty through the retired aviator recall program.

The program was created in 1999, when Congress let the Department of Defense fill 500 positions through voluntary recalls. The Air Force was allotted 208 of the 500, said Lt. Col. Jim Mont, chief of the Air Force&#8217;s aviator recall program.

Air Force retirees will step into vacant staff jobs primarily at headquarters and major command levels, Mont said; only a handful will return to the cockpit.

Some of those desk jobs were left vacant after the Air Force returned pilots who&#8217;d been filling them to cockpits to ease a shortage of seasoned fliers, the Air Force Association&#8217;s online aerospace journal reported in June 2002.

&#8220;Currently, our inventory of rated individuals does not equal the requirements,&#8221; Mont said.

Harrington said the program lets the Air Force fill jobs that otherwise would have remained vacant. It also frees active-duty fliers from staff jobs &#8220;and use us to fulfill those staff roles.&#8221;

When Harrington retired from the Air Force in February 2000, after 21 years on active duty, he went to work for the commercial airlines. His family set up house in Manchester, N.H., while Harrington commuted to Detroit. He was happy flying for Northwest Airlines, he said, but a letter from the Air Force Reserve piqued his interest. It was after Sept. 11, 2001, and the struggling airlines were starting to furlough employees.

The letter asked Harrington if he would be interested in joining the reserves and acquainted him with the Air Force personnel center&#8217;s Web site, www.afpc.randolph.af.mil. That&#8217;s where he learned about the retired aviator recall program. Harrington said he already was looking into other employment options, and the aviator program seemed a good fit.

The job, though, provided significant economic benefits. He enjoys the same entitlements as any other active-duty Air Force member. His added time in the service will be tacked on to his retirement benefit qualifications. If Harrington stays in the program for two years and a day, he can retire at a higher pay grade.

Like others in the program, when he returned, he assumed the same rank he held at retirement but is not eligible for promotion. And that&#8217;s fine with him. &#8220;I don&#8217;t feel myself under the stress and strain of having to worry about that,&#8221; he said.

Harrington&#8217;s position was vacant for about a year before he arrived in Japan last summer. He&#8217;s already made an impact, according to one of his colleagues.

Initially, Congress capped the tour length for retired aviators; they could last only through Sept. 30, 2003. But Congress recently extended the program to 2008, Mont said. Individuals may sign up for a maximum of three years per tour. Of those due to leave Sept. 30, about 80 percent have signed on for another three years, he said, adding that only three have elected not to extend.

Mont said many returned to the Air Force for reasons similar to his: &#8220;A lot of them went to the civilian world and found the grass wasn&#8217;t necessarily greener &#8212; it was just different grass. They haven&#8217;t found it as fulfilling as they wanted.&#8221;

Of the 170 in the program, five are flying, Mont said; they train other pilots.