Retreats aim to put 'together' back into marriages Jaimie Eisenhart and her husband, Staff Sgt. Benjamin Eisenhart, have their photo taken with their daughter, Audrey, at Disneyland Paris during a family retreat last spring, sponsored by the Ramstein chapel. The trip mixed leisure and workshops on strengthening their family and their relationship with each other. (Courtesy of Jaimie and Benjamin)

Jaimie Eisenhart and her husband, Staff Sgt. Benjamin Eisenhart, have their photo taken with their daughter, Audrey, at Disneyland Paris during a family retreat last spring, sponsored by the Ramstein chapel. The trip mixed leisure and workshops on strengthening their family and their relationship with each other. (Courtesy of Jaimie and Benjamin) 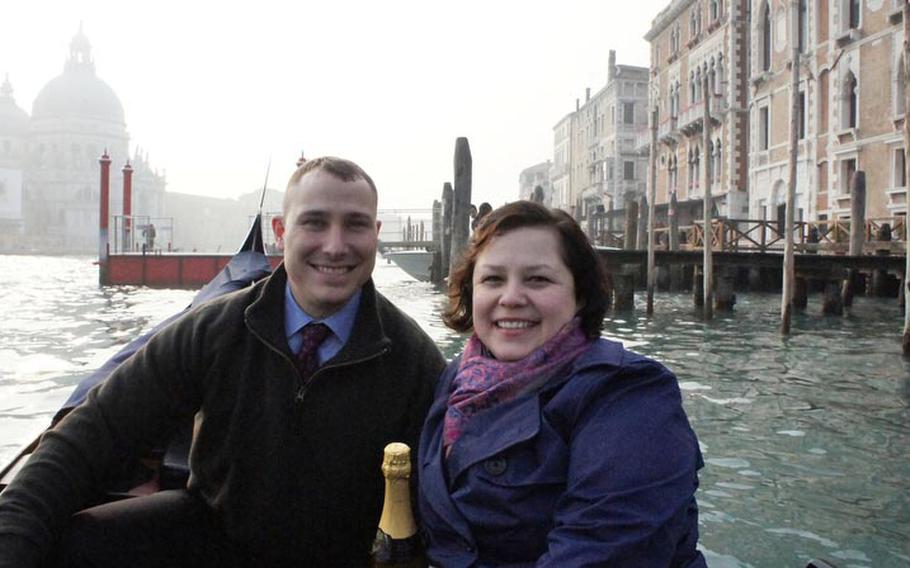 Senior Master Sgt. Mark DeCorte and his wife, Tech. Sgt. Lorretta DeCorte, on a gondola ride in Venice during a couple&#39;s retreat last February that was sponsored by the Ramstein chapel. Air Force chaplains at Ramstein and across the service are reaching out to over-taxed and stressed-out military families, making the DeCortes among a growing number of Air Force couples to voluntarily attend a chapel-sponsored marriage retreat in recent years. (Courtesy of the DeCortes)

RAMSTEIN AIR BASE, Germany &mdash; The weekend trip to Verona, Italy, for Valentine&rsquo;s Day this year recharged the DeCortes&rsquo; marriage, they said.

With four children, ranging in age from 10 to 18, time alone for the dual Air Force couple was a rare treat.

Almost unheard of, actually: The last time they could recall being without the children for the night was a camping trip in 1997, the year they got married while stationed at Scott Air Force Base, Ill., where they met.

With the demands of the military and raising a family, it&rsquo;s easy to &ldquo;lose sight of &lsquo;together,&rsquo; &rdquo; said Tech. Sgt. Lorretta DeCorte, 39, a Ramstein medical technician. &ldquo;Life happens and you&rsquo;re distracted sometimes.&rdquo;

The Verona weekend came courtesy of a Ramstein chapel program that subsidized the trip. It was part romance &mdash; with a side trip to Venice for a gondola ride with serenade &mdash; and part work &mdash; mandatory attendance at marriage counselor Gary Chapman&rsquo;s &ldquo;five love languages&rdquo; workshops.

Air Force chaplains at Ramstein and across the service are making a concerted effort to reach out to over-taxed and stressed-out military families, and a growing number of Air Force couples have voluntarily attended chapel-sponsored marriage retreats in recent years.

The Air Force launched MarriageCare in 2008, after chaplains across the Air Force noticed that more airmen were seeking marriage counseling prior to and after returning from deployments, as were their spouses, said Chaplain (Lt. Col.) Brian Hochhalter, the resource division chief in the Air Force Chaplain Corps College, co-located with the Army Chaplain School at Fort Jackson, S.C.

The MarriageCare retreats are aimed at couples facing a pending deployment or adjusting to new routines after a spouse returns from downrange. The events are usually free, or steeply discounted, with wing commanders and base chapels subsidizing the costs. Retreats typically are held over a weekend at a resort or hotel off base. Meals, lodging and often child care are provided. The Air Force estimates that more than 1,000 people have attended the retreats since 2008.

Pleased with feedback from the retreats, and with more chaplains now trained to lead group marriage counseling sessions, the Air Force plans to more than double the number of MarriageCare retreats it offers, to about 70 annually Air Force wide, reaching about 2,800 people, Hochhalter said.

The Air Force considers the state of one&rsquo;s marriage to be a readiness issue. In an email to Stars and Stripes, Hochhalter said marital problems can spill over into work centers and &ldquo;undermine readiness and erode resiliency.&rdquo;

Some Air Force bases present the retreats as &ldquo;preventive maintenance&rdquo; to avoid any stigma in attending.

The Army has a similar approach. Its Strong Bonds program is also chaplain-led and brings couples together at off-base retreats, with a core mission of increasing &ldquo;soldier and family member readiness through relationship education and skills training,&rdquo; according to the Army&rsquo;s Strong Bonds website. The Army planned more than 5,000 Strong Bonds events for the current fiscal year, according to an Army news release.

The retreats &ldquo;are spiritual, but not religious,&rdquo; open to people from all faith backgrounds,&rdquo; Hochhalter said. &ldquo;Chaplains do address a few religious concepts, but in a way that makes everyone feel included.&rdquo;

Couples work on improving their communication, and learn how to forgive more easily, among other skills.

The push to get more couples talking about their relationship comes as the number of airmen getting divorced across the Air Force has reached its highest level since at least 2001. Last year, more than 6,000 airmen servicewide reported a failed marriage, a divorce rate of 3.49 percent compared with 2.5 percent in 2001, according to information provided by Air Force officials at the Pentagon.

The Air Force chaplain corps currently relies on wing commanders to pay for couples to attend MarriageCare retreats with base appropriated funds, according to Hochhalter.

But the corps hopes to secure $740,000 in appropriated funds from the Air Force for the program, supplementing with chapel funds, as needed, Hochhalter said.

The Ramstein chapel plans to host a MarriageCare retreat in February, and also hopes to expand its locally grown Chapel Reintegration and Resiliency Retreat.

Through the Ramstein program, started by a team of chaplains several years ago, the chapel subsidizes about four major marriage retreats or seminars annually, said Chaplain (Capt.) Brad Phillips, who currently leads the program. The chapel most recently hosted Mark Gungor, whose &ldquo;Laugh Your Way to a Better Marriage&rdquo; seminar drew more than 700 couples.

This spring, Ramstein chaplains took 51 families for three days and two nights to Disneyland Paris. Families had free time to visit the park, but couples were required to attend daily seminars on communication, creating more family time, and other topics, led by marriage and family expert Jerry Pipes.

&ldquo;It was probably the most time we got to spend together as a family without interruption,&rdquo; said Jaimie Eisenhart, 24, who went on the trip with her husband, Staff Sgt. Benjamin Eisenhart, 26, and their 16-month-old child.

With the chapel chipping in about half of the cost, the trip was also affordable, the Eisenharts said. The family paid $625, which included lodging, bus transportation, one-day park tickets and breakfast.

&ldquo;We have had absolutely no push-back from our parishioners,&rdquo; Phillips said of the chapel subsidizing the seminars and retreats using donations. &ldquo;The program is and has been viewed as a form of outreach to our &lsquo;own&rsquo; community. We are taking care of airmen and their families.&rdquo;

While in Verona, the DeCortes learned how they can best express their love to each other.

&ldquo;I can make my husband a great meal and he&rsquo;ll be happy with that,&rdquo; Lorretta DeCorte said. &ldquo;I&rsquo;m the opposite: I like a gift here and there&rdquo; and words, such as &ldquo; &lsquo;I&rsquo;m thinking of you&rsquo;, or &lsquo;I&rsquo;m sorry.&rsquo; &rdquo;

&ldquo;And my time,&rdquo; said Mark DeCorte, with a smile. &ldquo;So when I work late, I pay.&rdquo;