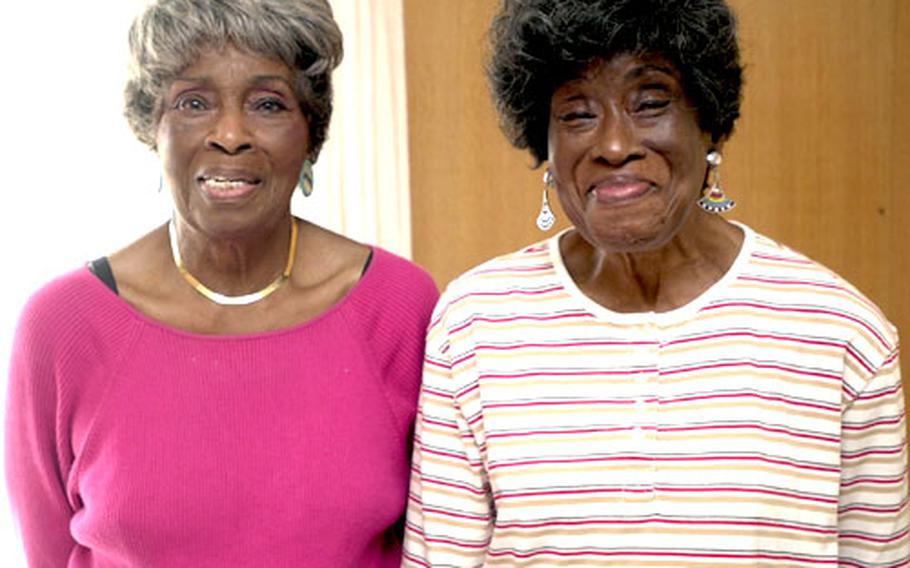 Emma McCoy, right, is retiring from the Department of Defense Dependents Schools system after 46 years of service. Her sister Lottie, left, retired from DODDS after 44 years. The ladies plan on writing a book about their careers. (Fred Zimmerman / S&S)

KADENA AIR BASE, Okinawa &#8212; A Kadena Elementary School teacher is retiring Saturday from the Department of Defense Dependents Schools system after 46 years of service.

But it&#8217;s not really retirement, said Emma McCoy, a compensatory education reading teacher for third and fourth graders: With world travel and writing a book in her plans, it&#8217;s &#8220;life after DODDS.&#8221;

McCoy will leave Okinawa on Saturday after six years &#8212; but in one sense, her departure from her DODDS job will be far speedier than her arrival. Hired to take a position in Germany in 1957, she left the states via boat and traveled 12 days to cross the Atlantic.

Living in all those different cultures taught her to think differently, said McCoy. &#8220;No college course could&#8217;ve given me the knowledge I received from DODDS. Had I remained in the States, I wouldn&#8217;t see things the way I see them now.&#8221;

Not seeing her around campus will be strange, said Deborah Carlson, assistant principal.

&#8220;You expect to see her when you walk out your door,&#8221; Carlson said. &#8220;She&#8217;s a fixture. People respect her loyalty to the school and her commitment to helping students. She also makes it her business to be at every meeting and wants to be involved overall, not just with her program.&#8221;

Carlson said the students McCoy worked with &#8212; primarily, children who had fallen behind and needed some extra help &#8212; might miss her most.

The sisters plan to write a book about their lives &#8212; and also to become reacquainted with the United States by visiting parts of the country they&#8217;ve never seen.

In addition to sharing an apartment and family home in Columbus, Ohio, they also share an apartment in New York City. But Emma said they&#8217;re thinking about giving up the New York apartment and perhaps buying a condominium somewhere warm. Both spent more than 10 years in Norway and, they said, have had quite enough of shoveling snow.

But not of kids.