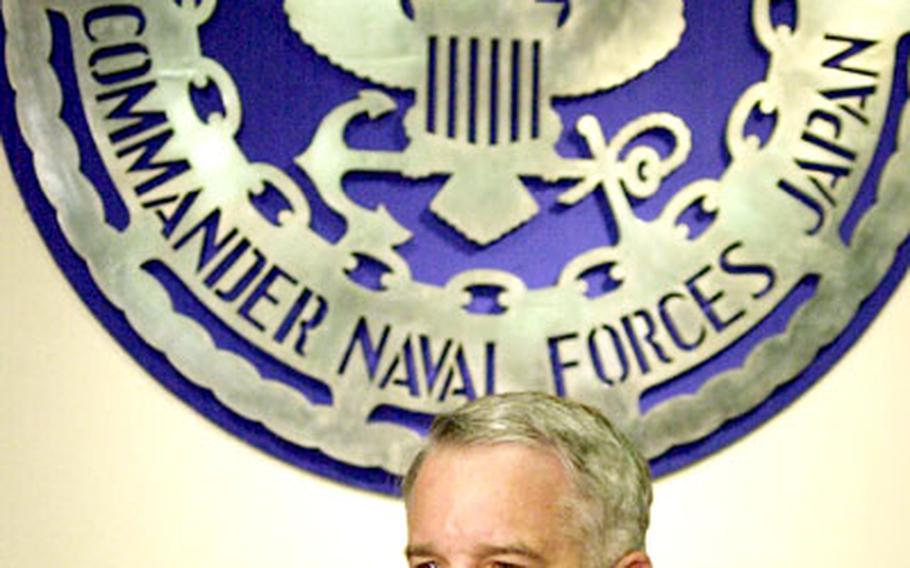 YOKOSUKA, Japan &#8212; Rear Adm. Robert C. Chaplin said dealing with sailors who &#8220;crossed over the line,&#8221; and maintaining one of America&#8217;s strongest alliances were a few of his challenges as Commander of Naval Forces Japan.

Chaplin steps down Friday from his command of all U.S. Naval land components in Japan. He will retire after 33 years with the Navy. Rear Adm. Rick Ruehe, commander of Amphibious Force Seventh Fleet, Amphibious Group One in Sasebo, will assume command.

In one of his last interviews as commander, Chaplin spoke about the past three years &#8212; and what he believes will continue to challenge Navy leaders.

The three events during his tenure Chaplin said were most difficult: serving as liaison between the Navy and the families of victims of the Ehime Maru trawler after it was sunk by the USS Greeneville in Hawaii; settling with Japanese officials to close the Jincampo incinerator outside Atsugi Naval Air Facility; and reacting to the terrorist attack on the USS Cole in Aden, Yemen, and the subsequent Sept. 11, 2001, attacks in the United States.

Chaplin also spoke about the Navy&#8217;s role in the Pacific and the need to maintain a strong force in Japan.

&#8220;We should never think in terms of moving forces back [toward the United States], but rather forward,&#8221; he said. &#8220;Is there another place that our forward-deployed ships can go? Probably. But I still think that our ships are better served here for what we keep an eye on.&#8221;

Chaplin&#8217;s comments come as the Defense Department considers restructuring the military and debate continues over the future of an aircraft carrier in Japan.

The USS Kitty Hawk is slated to be decommissioned in 2008 and most likely would be replaced with a nuclear-powered carrier. Japan prohibits homeporting nuclear-powered vessels.

Guam and Hawaii have vied for the Kitty Hawk&#8217;s replacement; Chaplin said it&#8217;s premature to speculate about the future carrier.

&#8220;Right now, [Japanese leaders] allow nuclear-powered warships to visit our ports here,&#8221; he said. &#8220;Homeporting [a nuclear-powered warship], that&#8217;s an issue that we would have to work with them through. The U.S. Navy is going through the options. Once they decide, then they will discuss it with the host nation.&#8221;

Chaplin said there are other issues the Navy will have to work out with Japan, including finding an alternative to Iwo Jima for night landing practice for the air wing.

Housing for sailors and families is another pressing issue. The Navy plans to give back land used for housing around Tokyo, but only if space is available elsewhere.

The Navy is considering partnerships with private companies and local leaders to build more housing, he said.

Chaplin said the contentious civilian clothing policy he instituted over the summer is meant to create a better image of Americans to Japan. Civilians and servicemembers are indistinguishable to locals, he said, so all Americans should dress appropriately.

While some sailors have caused trouble off base, Chaplin said he is pleased overall with the behavior of most sailors and their families.

Chaplin said one of his greatest accomplishments has been forging a strong relationship with Japanese officials. Japan, he added, has proven itself to be one of the United States&#8217; strongest allies.

&#8220;When I came here, nobody would have thought that Japanese Maritime Self-Defense Force ships would be forward deployed in the Indian Ocean in support of the United States Navy in the war on terror.&#8221;