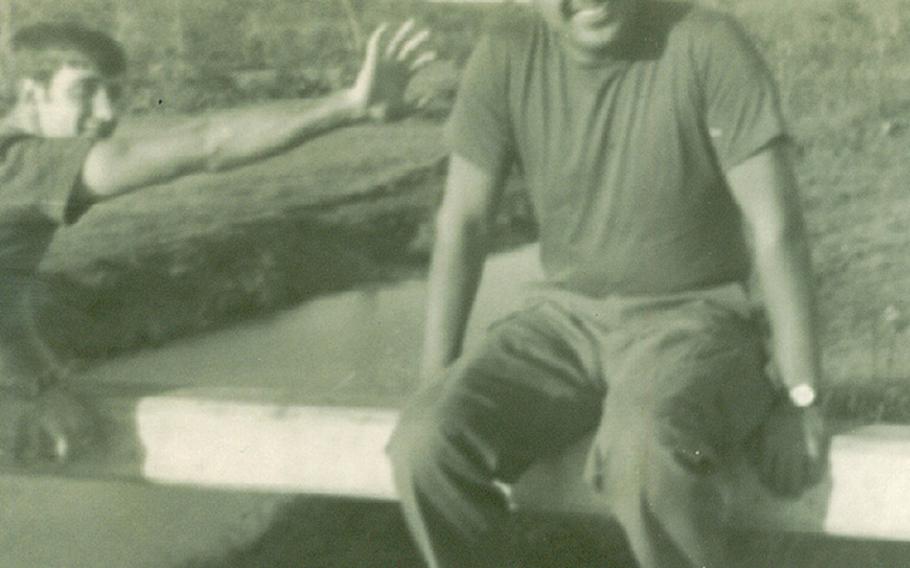 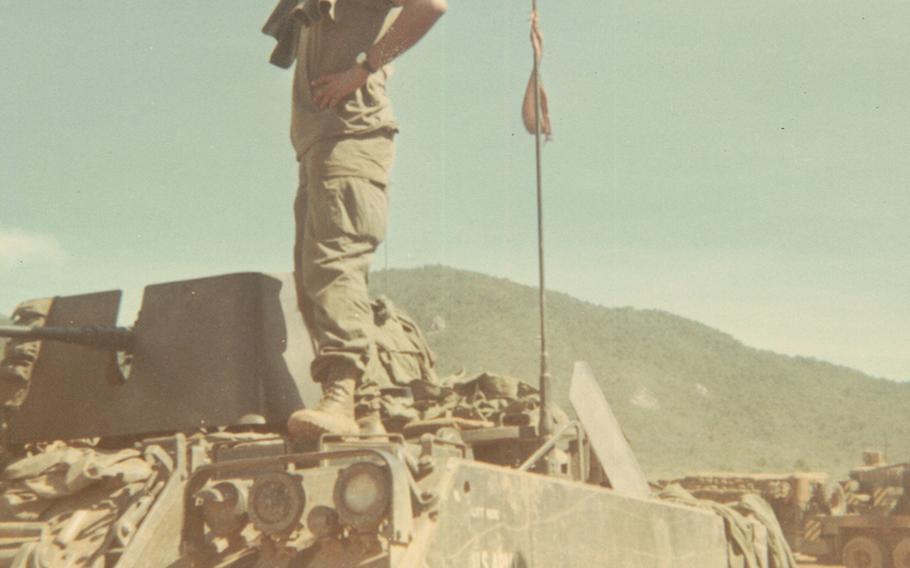 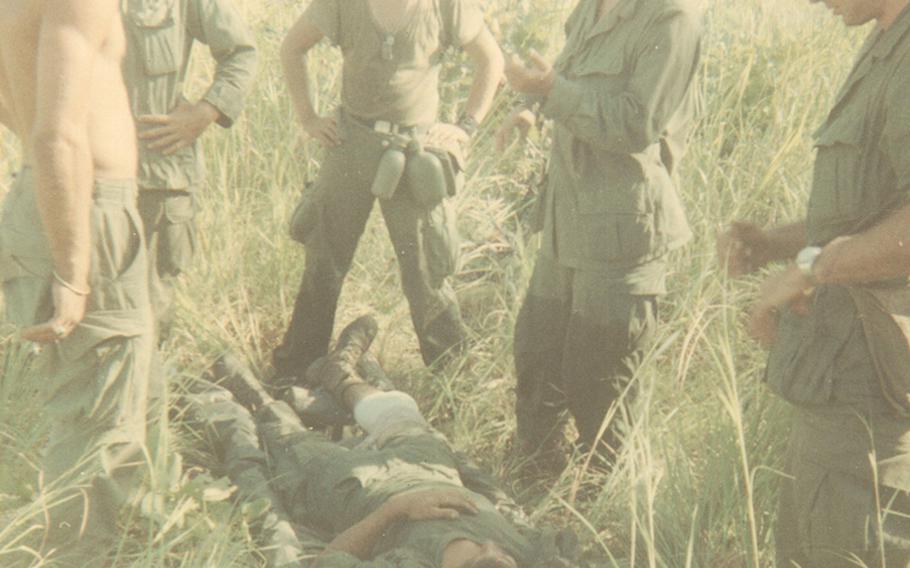 Sam Luna lays on a gurney after he was wounded in Vietnam on July 31, 1968. Luna had been back from combat for 35 years and had recently retired when he began to recognize symptoms of post-traumatic stress disorder. (Courtesy of Sam Luna) 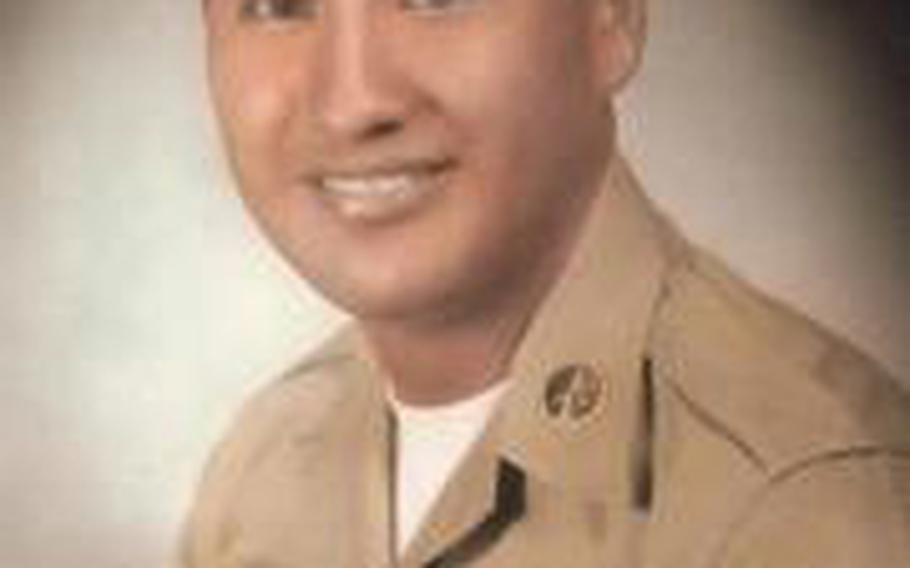 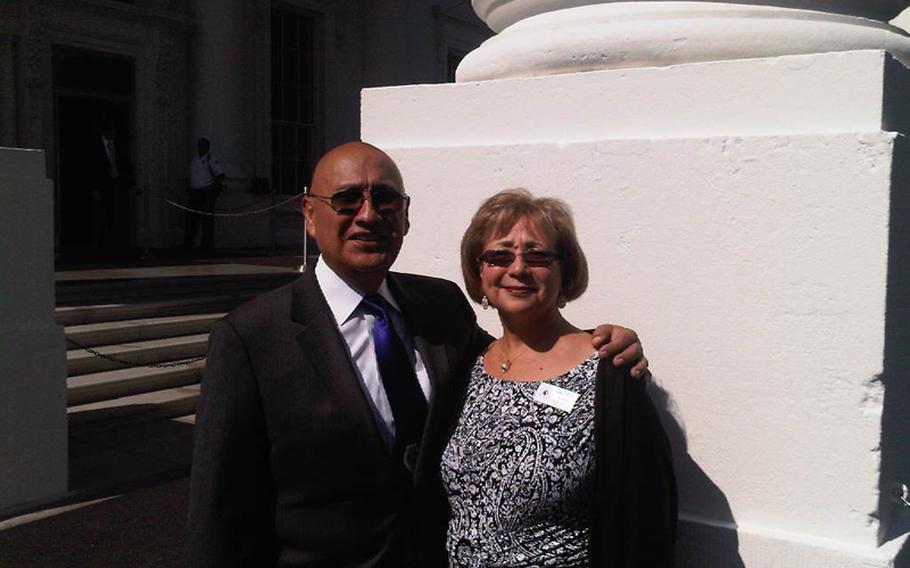 Vietnam veteran Sam Luna, shown in this recent photo with wife Gloria, had been back from combat for 35 years and had recently retired when he began to recognize symptoms of post-traumatic stress disorder. (Courtesy of Sam Luna)

WASHINGTON &mdash; It took Sam Luna more than 35 years to get treatment for his post-traumatic stress disorder.

&ldquo;I didn&rsquo;t realize anything was wrong,&rdquo; the combat-wounded Vietnam veteran said. &ldquo;I thought I had adjusted well after I came back. I had a job, I had a family, everything looked great from the outside.&rdquo;

But shortly after he retired in 2004, his anxiety attacks and stress levels increased. A trip to his local Veterans Affairs hospital triggered war memories. The former soldier started to notice the hair-trigger temper his wife had complained about for years.

He found himself thinking more often about the war &mdash; and the friends he lost.

&ldquo;It was like I had a black box on the mantel for years, but I could ignore it when I left for work every day,&rdquo; he said. &ldquo;When I retired, it was still sitting there, waiting for me.&rdquo;

But for Vietnam veterans who returned decades ago to a harsh reception and limited mental health options, that could mean a new wave of stress and serious psychological issues as their generation enters retirement age.

The average age of a Vietnam vet is 65 years old. More than 5 million of the nation&rsquo;s more than 7 million Vietnam-era veterans are between 60 and 70 years old, according to data from the National Center for Veterans Analysis and Statistics.

An additional 1 million are expected to turn 60 within the next five years.

&ldquo;A lot of people coped with the traumatic experiences in war by throwing themselves into work when they got home,&rdquo; said Tom Berger, director of the health council at Vietnam Veterans of America. &ldquo;Now, after being a workaholic for 40 years, they suddenly don&rsquo;t have that structure in their life anymore. I expect there will be more and more folks seeking out help for those issues.&rdquo;

But Berger and other veterans advocates worry that if there is a flood of new cases, the already struggling VA mental health system won&rsquo;t be able to handle it.

In retrospect, Luna said, his PTSD should have been obvious.

His wife, Gloria, said after he returned from Vietnam, the 22-year-old soldier never spoke about the war or his injury. He punched walls when he got angry. He stewed in silence over things that caused him stress, and he lashed out at her and their children when it became too much.

&ldquo;I knew he was different, but I figured that just happens when men come back from war,&rdquo; she said.

For his part, Luna said he just &ldquo;forgot&rdquo; everything he saw overseas. He blocked out the stress of patrols in hostile areas, the men who got hit by sniper fire and the snare trap that shot a wooden spike through his right leg.

Once he was well enough to do so, he found work with the Texas criminal justice system as a probation officer and threw himself into his career.

John Edwards, a rifleman who was entering Vietnam the same year Luna was leaving, said he saw the same pattern in his war experience. After two years of violent scenes and close calls, he just wanted to return home to a &ldquo;normal&rdquo; life. He found success in a series of technology firms. He was diagnosed only recently &mdash; more than 40 years after his return &mdash; with PTSD.

&ldquo;I didn&rsquo;t feel right, and someone told me I should go in [to the VA] and talk with someone,&rdquo; he said. &ldquo;It wasn&rsquo;t about getting benefits for me. It was about getting help.&rdquo;

He&rsquo;s getting that help now. Berger said it&rsquo;s a common story heard by those at Vietnam Veterans of America, one that shows the need for mental health services for all ages.

But he worries an influx of cases like his could overburden the VA medical system.

&ldquo;They just don&rsquo;t have the resources to handle that,&rdquo; he said.

Last year, more than 476,000 veterans received treatment for PTSD from VA hospitals and clinics, up dramatically from about 272,000 in fiscal 2006.

Iraq and Afghanistan veterans make up a large portion of that increase but still account for only about one-fifth of all PTSD patients. More than half of the new cases come from earlier wars.

Fewer than half of patients requesting an initial evaluation were seen within two weeks, and many facilities took months to schedule even basic visits.

In the past, they have issued alerts around anniversaries or other large public events that might trigger war flashbacks &mdash; when the movie &ldquo;Saving Private Ryan&rdquo; was released, for example &mdash; about the possibility of new patients, but studies haven&rsquo;t shown a significant jump in therapy visits following those markers.

&ldquo;But anecdotally, I can tell you I&rsquo;ve seen a lot of veterans [following notable dates or events] who just want to talk informally with someone,&rdquo; he said. &ldquo;We know anniversaries are important, and they evoke a lot of memories.&rdquo;

The Defense Department last month launched its 50th anniversary commemoration of the Vietnam War, pushing those veterans&rsquo; experiences and memories to the forefront again.

Barbara Van Dahlen, founder of the nonprofit counseling organization Give an Hour, said the combination of that and the veterans&rsquo; ages create a &ldquo;perfectly normal&rdquo; situation for mental health issues to resurface.

&ldquo;I don&rsquo;t want to suggest that all of these veterans will need professional help,&rdquo; she said. &ldquo;But it&rsquo;s a situation where the memories and the emotions are bubbling up. For some, it&rsquo;ll be a conversation with their children or their wife, sharing things they wanted to before didn&rsquo;t feel like they could. Some will need more help. The important thing to know is that it&rsquo;s normal and important to address those issues, and not just to shove it away again.&rdquo;

Veterans of Foreign Wars deputy director Gerald Manar, a Vietnam veteran, noted that he saw more visitors to the Vietnam Wall on Memorial Day last month. It wasn&rsquo;t just veterans either, he said. Many families were there, asking questions and listening to stories.

&ldquo;Vietnam veterans were slapped with a lot of unfair labels when they came home,&rdquo; Manar said. &ldquo;Millions went off to war, served with distinction and honor, and then came back to be major contributors to the middle class. But that doesn&rsquo;t mean they dealt with everything.&rdquo;

Friedman said from a treatment perspective, the age or combat era of a mental health patient doesn&rsquo;t really matter.

&ldquo;PTSD is PTSD,&rdquo; he said, noting that recent advances in treating younger vets can be easily translated to older generations.

Luna, who is in counseling with the VA to deal with his PTSD, works with Vets&rsquo; Journey Home Texas, running weekend therapy retreats for veterans of all eras. They mainly work with younger veterans, in the hopes they can deal with their war traumas more quickly and more definitively than the older generations. But he said he&rsquo;s also started hearing from a large number of Vietnam veterans who have just retired.

Said Luna: &ldquo;America has no idea what the Vietnam vets are still going through.&rdquo;