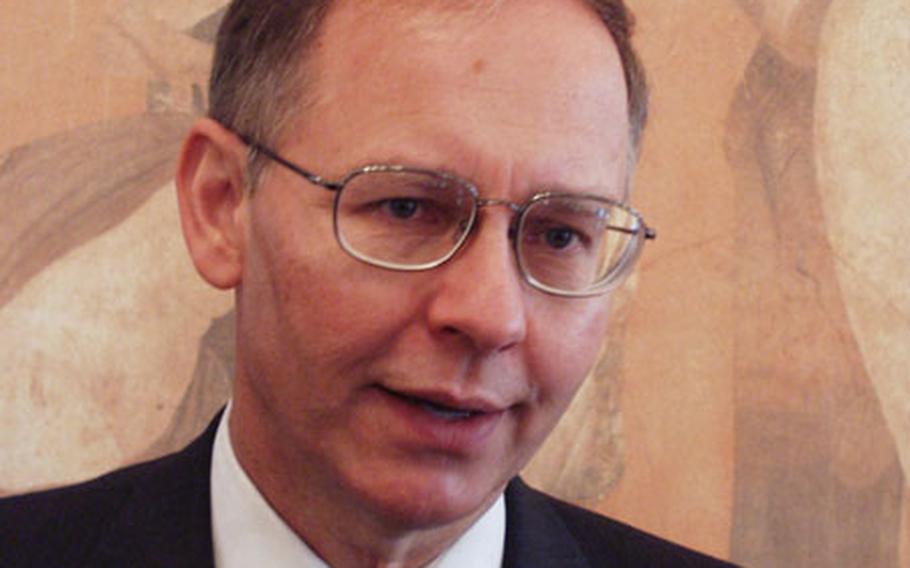 VICENZA, Italy &#8212; Asked to consider what issues concern him most as a retired American soldier living in Europe, Charles Corzatt has trouble keeping a smile off his face.

But a few moments later, in a more serious mode, the retired Army major has plenty of issues to list while waiting for a retiree appreciation day to get under way at Caserma Ederle:

&#8226; Paying into the Survivor&#8217;s Benefit Plan for the rest of his life. Corzatt, who served 23 years in the Army and 18 years as a civilian for the federal government, thinks paying into the fund for 30 years is more than enough.

&#8226; Getting $211 each month taken out of his check from the government to pay for medical insurance. Corzatt, like many veterans who joined the armed forces in the World War II era, feel they should be given free health care for life. After all, that&#8217;s what many of them were told when they joined.

There&#8217;s an array of issues veterans are concerned about, according to comments expressed at recent days honoring retirees in Germany and Italy. A few of the top experts in Europe and the States briefed those gathered in Vicenza on several issues.

The results appear to be a mixed bag. Richard Groccia, a counsel at the U.S. Embassy in Rome, said it&#8217;s easier to apply for Social Security benefits overseas and communicate with many offices back in the States than it&#8217;s ever been.

Retirees scored a victory by gaining the right to receive packages weighing more than a pound at APO boxes earlier this year. But that&#8217;s only for medication and that&#8217;s unlikely to change.

There may be some light at the end of the tunnel when it comes to getting all checks from the government directly deposited into foreign national banks.

Looming over everything is the military&#8217;s impending transformation in Europe. Base closures would hit many retirees particularly hard.

Robert Mentell, president of the U.S. Army Europe Retiree Council, says lessons can be learned from places such as N&#252;rnburg, Germany. The United States had a large presence there until the drawdown after the Berlin Wall fell. The troops pulled out, but many military retirees stayed behind.

At least some retirees are used to long hauls already. Giovanni Chiappi lives in the village of Farini in the province of Piacenza, taking care of elderly parents. He makes the nearly three-hour drive to Vicenza every month to pick up mail and gather news.

There are almost 15,000 former servicemembers who retired from careers in the military to live in Europe today. Of those, more than half live in Germany. Almost 4,000 of the European retirees are 65 years or older, so medical care is certainly a big issue. It&#8217;s also an issue for the widows &#8212; many of them foreign nationals &#8212; who add another 2,000 names to the list.

Compared with the active-duty population in Europe, the number of retirees is still fairly small. But that&#8217;s not the case across the ocean.

For the last decade, there have been more retired career servicemembers than active-duty personnel. According to retired Col. John Radke, retirement services officer for the Department of the Army, the gap is growing.

Currently, the Army alone has 720,000 retirees. That&#8217;s compared with 503,000 active-duty personnel. Add former sailors, airmen and Marines and civilian survivors and the number hovers around 2 million people, according to John Benedict of the Defense Finance and Accounting Services. That agency pays out about $3 billion every month to retirees.

It&#8217;s those kind of numbers that work for &#8212; and against &#8212; retirees. Congress is aware of the political support that retirees can generate in terms of numbers and general good will. But expanding benefits can lead to staggering sums of money.

That&#8217;s the bottom line on many issues, according to Mentell.

&#8220;I don&#8217;t think that&#8217;s going to happen,&#8221; Mentell said while talking about the possibility of getting retirees access to Tricare Prime overseas. That would create a large bill for the system.

There&#8217;s some possibility on several issues, though. Changes by the Federal Bank of New York might allow agencies such as the Veterans Administration to send checks electronically to banks in foreign countries. DOD recently said the idea was too expensive, but that was before the change by the Fed.

Such a move would save retirees and widows a significant amount of money by cutting out fees currently paid to cash checks. Recipients would also likely getter a better exchange rate.

On the health care front, Mentell said that getting rid of paying for health care entirely doesn&#8217;t look realistic. But legislation that would allow some vets to avoid paying penalties to get better health care is in Congress.