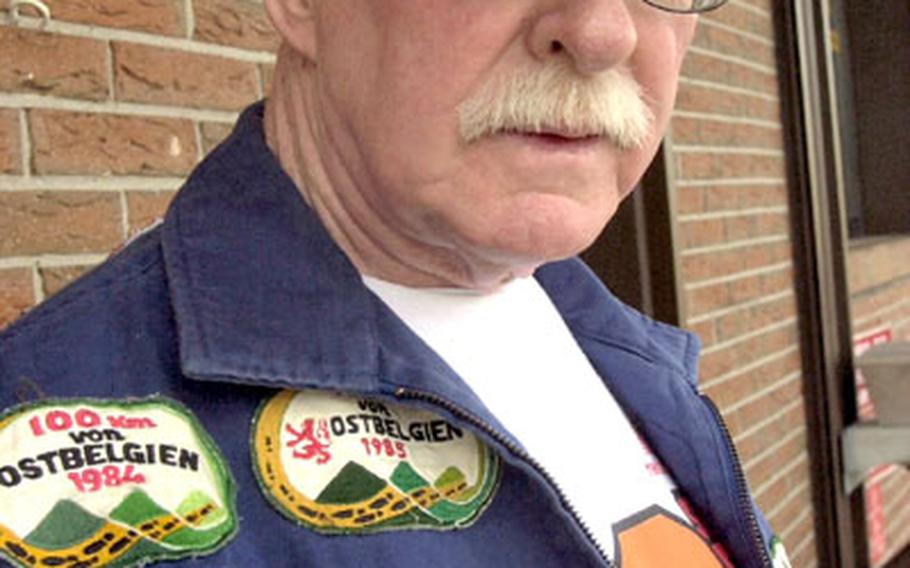 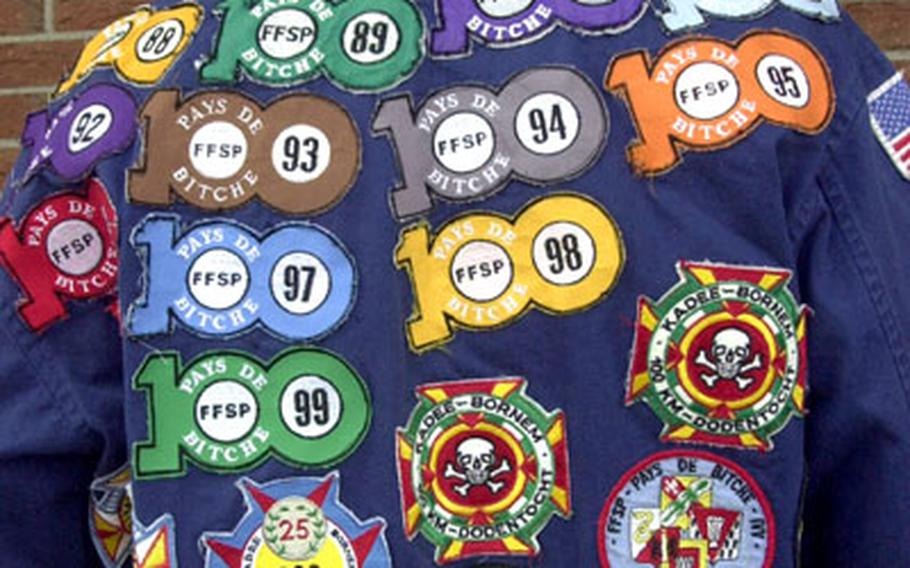 Frank Miller shows off the back of his jacket bearing patches from the numerous walks he&#39;s completed throughout Europe. (Scott Schonauer / S&S)

SPANGDAHLEM AIR BASE, Germany &#8212; The patches on Frank Miller&#8217;s prized jacket show he has a track record that is hard to match.

In 25 years, the 68-year-old Air Force retiree has walked more than 57,000 kilometers &#8212; about 35,300 miles &#8212; and has the patches to prove it. There is one for every 100 kilometer march he has made and there is barely enough room on his jacket to stitch on another one. He has finished 48 100-kilometer noncompetitive walks, known as volksmarching in Europe.

Every walk he has entered, he has finished.

That doesn&#8217;t mean he has any desire of quitting. He would do more organized volksmarches if they had them.

Miller, who worked on airplanes and calibrated testing equipment during his career in the Air Force as a technical sergeant, began walking shortly after retiring and has been an avid walker ever since.

He used to run five miles a day.

Volksmarching associations often offer pins, patches and other awards for those who complete the path. Miller, who once did a 150-kilometer walk in Belgium, said he continues to walk because of the many people he meets. He is a member of the Eifel Wanderers, a volksmarching club on base.

Most airmen on base know Miller from seeing him walk twice a week from his home in Bitburg to Spangdahlem &#8212; a distance of about 8 miles. Some motorists wave or honk their horn.

His passion for walking is infectious.

He turned Tech. Sgt. James Lopez and wife, Jennifer, on to volksmarching after they met him on base.

Miller typically walks carrying an American flag. He has no secret to how to survive the long treks, but his tip for avoiding blisters is slipping moleskin on the soles of his feet before hitting the pavement.

He also is known to drink a couple of beers before embarking on a 100-kilometer Volksmarch.

Miller&#8217;s goal is to walk the four-day Nijmegen Volksmarch in the Netherlands at 92. The walk is divided into four separate 50-kilometer walks and attracts tens of thousands of people.

Of course, by that time, he might have to get another jacket to find a place to sew on that monumental patch.