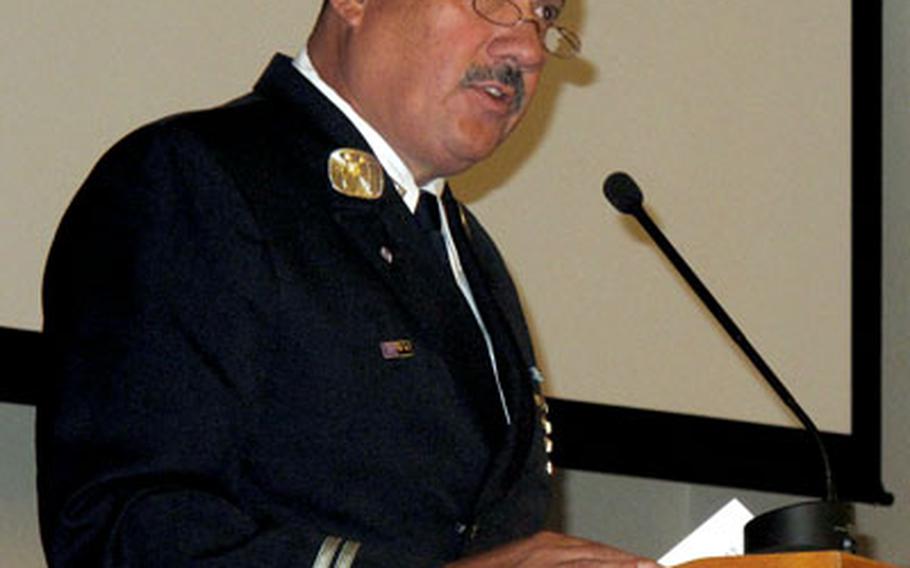 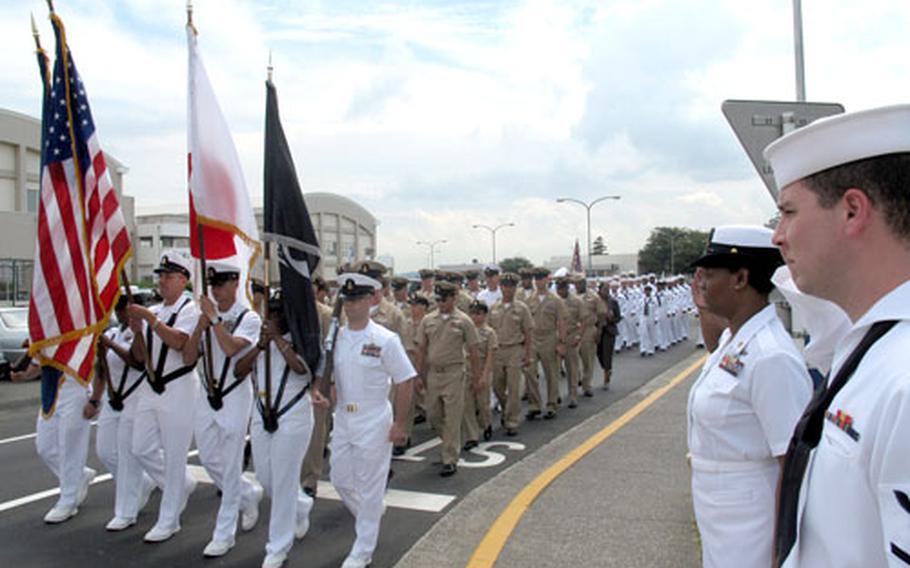 YOKOSUKA NAVAL BASE, Japan &#8212; Al Fuentes woke up three weeks after the north tower of the World Trade Center fell on top of him.

Eight years later after Sept. 11, 2001, his lungs still hurt and his hearing isn&#8217;t what it used to be. His body will probably never heal completely.

Fuentes spoke with Stars and Stripes on Thursday after meeting with sailors aboard the USS McCampbell and touring the base fire department. On Friday, he spoke to sailors at the Chapel of Hope, shortly before a 9/11 remembrance parade.

&#8220;It&#8217;s an honor to have him come such a long way to share his story with us, especially when he still has health issues going on,&#8221; Chief Petty Officer Zachary Weymer said.

Fuentes now heads the Patriot Group, a nonprofit organization that trains first responders to plan for and manage response to terrorist attacks.

When meeting with safety officials around the country, he urges them to improve on intelligence coordination.

He also talks to civilians and urges them to prepare for what he believes is an inevitable second attack. He then recounts his trauma, which he wrote about in the book &#8220;American By Choice.&#8221;

Fuentes was working at the Brooklyn Navy Yard across from eastern Manhattan when the first plane struck the north tower.

Fuentes, acting battalion chief for the fire department&#8217;s marine division, saw the second plane fly into the south tower while traveling up the Hudson River in a fire boat.

When he arrived at the scene, he witnessed what he says became the only nightmare he&#8217;s had from that day.

The south tower collapsed at 9:59 a.m. The north tower continued to burn.

Fuentes and his friend, Ray Downey, rushed past the wreckage to try to save a group of people at the badly damaged Marriott Hotel next door to the north tower. Fuentes does not know if it was fear or confusion, but most of the group hesitated to go with them.

Fuentes and Downey were able to save one civilian from the hotel. But as they made their way out along West Street, Fuentes looked up and saw a giant black chunk from the north tower falling above him.

Buried under debris, Fuentes faded in and out of consciousness until emergency workers spotted his reflective uniform and pulled him out, two hours later.

Fuentes&#8217; skull was cracked, nine ribs were broken and his lungs were burned. When he arrived at a hospital, doctors induced a coma.

He woke with his wife, Eileen, at this side.

The memories flooded back immediately.

&#8220;Call Father Judge,&#8221; Fuentes said to his wife, asking for the priest who had guided him and his children, and had been his confidant in difficult times.

Father Judge is dead, she said.

Shortly afterward, the doctors put Fuentes back to sleep.

Every day since, Fuentes has dealt with survivor&#8217;s guilt, anger and anguish. It doesn&#8217;t go away. But when he meets servicemembers and others trying to keep the country safe, he said, it does get easier.