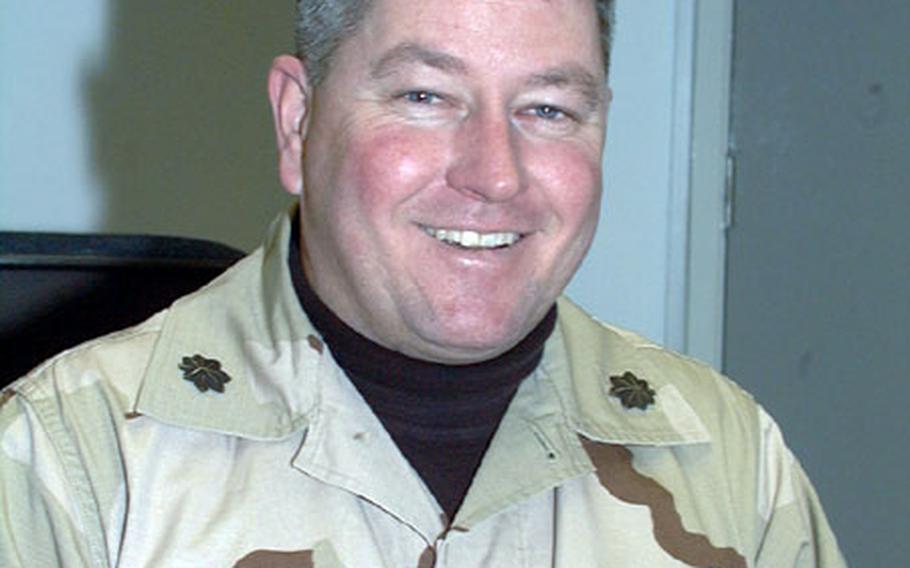 U.S. Air Force Lt. Col. Bill Lemenager of the 352nd Special Operations Group at RAF Mildenhall, England, was involved on the initial attack of the Gulf War 12 years ago. He retired from the Air Force on Friday. (Ron Jensen / S&S)

U.S. Air Force Lt. Col. Bill Lemenager was there to help fire some of the first shots to oust Iraq&#8217;s military from Kuwait.

Lemenager was aboard the first of two MH-53J Pave Low helicopters leading a quartet of AH-64A Apache helicopters toward Target 001, an early-warning radar system just a few miles inside the Iraqi border.

The two groups were dubbed Task Force Normandy. Their mission: Open a hole in the ring of Iraqi air defense to allow the bombers and fighters inside Iraq undetected.

The Pave Lows would lead their Army brethren to within a few miles of the targets and then turn the Apaches loose.

Lemenager retired Friday, one day short of 21 years in the service. As the military prepares for another war against Iraq, his story sounds more like current events than history.

Every member of Task Force Normandy was highly trained for the mission. Rehearsals were held. But the feeling was different when the mission began for real.

Lemenager came under fire while flying less than 100 feet above the desert landscape. Two missiles roared from the darkness below and zipped past the aircraft.

A few miles from the radar site, the Pave Lows dropped chemical lights as a signal for the Apaches to finish the journey on their own.

Thirty-five miles away, the other Iraqi radar site was undergoing the same series of events. The timing of the mission required the radar sites to be eliminated 22 minutes before the bombers would reach their targets. If the helicopter attacks were late, air defenses farther inside Iraq could be warned. But the mission came off just as it had been designed.

As soon as the targets went down, Lemenager said, the many bombers and other aircraft already airborne and on their way appeared on the equipment scopes inside the Pave Lows.

The rest, of course, is history. After nearly six weeks of an air campaign, a 100-hour ground assault liberated Kuwait.

His effort, however, may have significance for those now waiting for war. Lemenager said his training proved valuable when reality arrived.

&#8220;When the bullets start flying, you will depend on your training like a security blanket,&#8221; he said.

It&#8217;s also important to rely on your colleagues, he said. Teamwork was critical.

Lemenager shook his head when asked if he regrets retiring with another war perhaps on the horizon.

He may stay in England with his family or he may move to Florida. He hasn&#8217;t decided.

One thing he does know, however, is that if war starts again in Iraq, wherever he is, the servicemembers he is leaving will be uppermost in his mind.