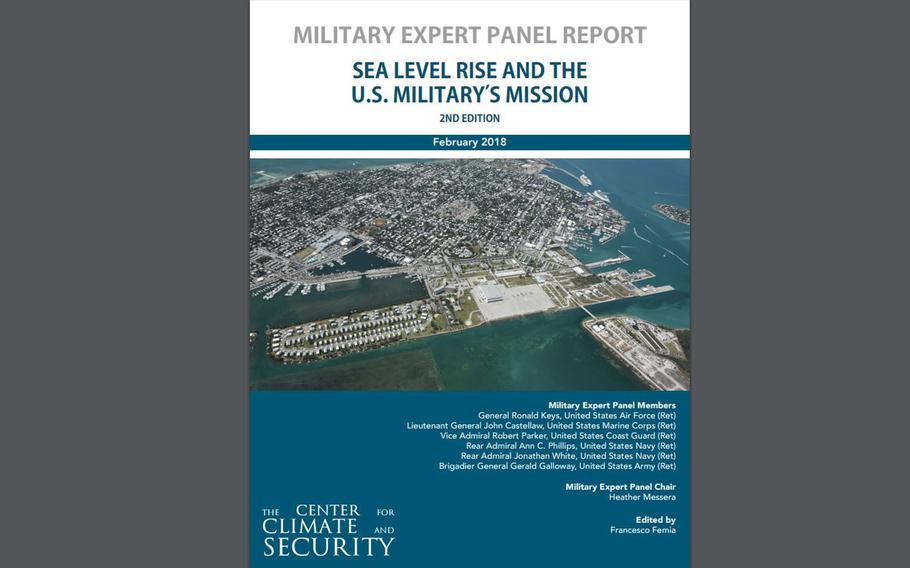 In a report for the Center for Climate and Security a panel of retired generals called for the Defense Department to factor in climate change as part of its long-term basing strategy. ()

In a report for the Center for Climate and Security a panel of retired generals called for the Defense Department to factor in climate change as part of its long-term basing strategy. () 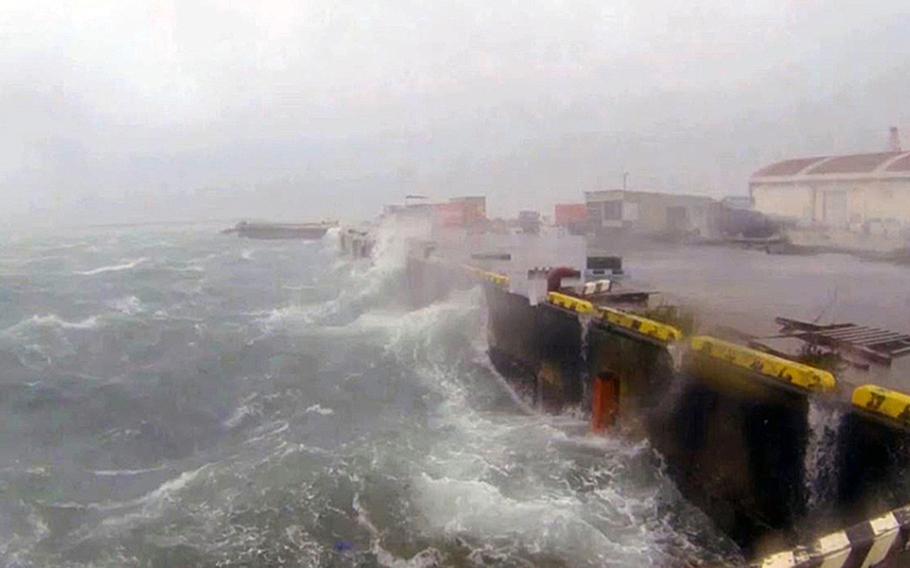 Typhoon Neoguri slams U.S. military bases in Okinawa in 2014. In a report for the Center for Climate and Security a panel of retired generals called for the Defense Department to factor in climate change as part of its long-term basing strategy. (Courtesy of Defense Department)

The Pentagon needs to begin war-gaming responses to environmental catastrophes and work to make its military installations more resilient as rising sea levels threaten them, a new report warns.

The Defense Department should factor climate change into its long-term basing strategy, a panel of retired generals and admirals wrote in a report for the Washington, D.C.-based The Center for Climate and Security.

“Given that around 10 percent of U.S. military installations and training grounds are located along low-lying and exposed coastlines, the long-term effects in terms of flooding will be significant,” said the report, titled “Sea Level Rise and the U.S. Military’s Mission.”

More than 200 military installations that took part in a recent vulnerability assessment have been affected by storm surge, and by the end of the 21st century, coastlines where the U.S. military operates will likely be very different, the report stated.

Rising sea levels in the Pacific and in Asia, along with increasingly severe tropical storms, “could pose enormous problems” for many coastal bases, the report said. Among these installations is a ballistic missile site in the Marshall Islands billed by the report as “a pillar of U.S. Strategic Command” and a “bulwark” against China.

“This strategic asset is under considerable risk,” the report stated.

The center conducted case studies on numerous bases, stretching from the Florida Keys to Maine on the east coast and California to Washington on the Pacific coast.

In the decades to come, flooding and storm surges could leave army airfields, naval shipyards and Marine training grounds exposed.

For example, a Navy nuclear submarine base at Kings Bay, Ga., is likely to face a spike in tidal flooding in the coming decades, making operations there vulnerable.

“This portends potential catastrophic impacts to the readiness and responsiveness of our strategic nuclear submarine force,” the report said.

While global warming and rising sea levels are intensely politicized in the U.S., the Pentagon has long warned of risks posed by changes in climate. These include threats to U.S. infrastructure and social upheaval in parts of the world where land degradation and water shortages could result in clashes for resources.

The report urges DOD to put more emphasis on contingency and long-term infrastructure planning. In particular, the Pentagon should model the future effects of climate change at critical bases that host unique functions, such as those that repair and refuel nuclear-powered naval assets, the report stated.