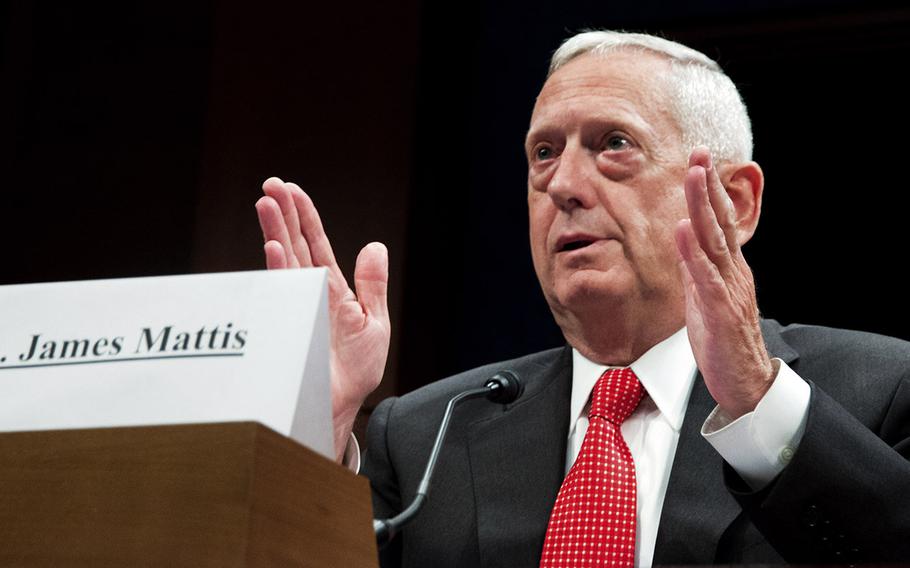 Retired Marine Corps Gen. James Mattis testifies at a hearing of the House Permanent Select Committee on Intelligence at the U.S. Capitol on September 18, 2014. (Rick Vasquez/Stars and Stripes)

WASHINGTON — Top retired military commanders on Tuesday warned the Senate that it should lift a mandatory cap on defense spending this year or put at risk military readiness as the world enters a new era of widespread conflict.

The hearing comes as the White House and Defense Department prepare to release proposed annual budgets Monday that will include a spending cap imposed by sequestration — and a political fight over cuts to troop benefits. Many lawmakers in the Senate and House say the modest $1.7-billion increase to the cap of the $523-billion 2016 defense budget should be removed to allow bigger increases.

“No nation in history has maintained its military power but failed to keep its fiscal house in order,” Mattis said.

But Congress’ agreement to cap defense dollars was meant to force wise choices on reducing spending and “it has failed in that regard,” he said.

Spending caps are set to kick in across the federal government this fall as a way to decrease the nation’s debt and will remain in place into the next decade, keeping defense spending to increases of about 2 percent.

With the fiscal 2016 budget proposals next week, Congress, the Obama administration and DOD are set to begin another grappling match over whether military personnel expenditures such as pay, retirement and benefits should be slashed. The Pentagon has argued those costs are ballooning and will crowd out other needs.

Mattis said the DOD cap should be repealed because it is sapping troop morale and causing uncertainty within the military.

Sen. Tim Kaine, D-Va., said Congress and the military should first develop a foreign policy strategy and then come up with the money to cover it, but the spending limit is upending that process.

“We’ve been allowing budgetary indecision to drive strategy, and that is the worst thing to do,” Kaine said.

Meanwhile, the cap comes as the United States is facing a variety of global threats — Islamic radicalism, a resurgent Russia, a nuclear ambitious Iran, a rising China — that has not been seen since the rise of the USSR during the Cold War, Keane said.

He told the Senate defense oversight panel that the country should generally take a more active military role around the world, including sending some ground troops to direct airstrikes against the Islamic State in Iraq and Syria.

The removal of combat troops and planned drawdown of advisory forces in Afghanistan could be premature and thus create instability in the future, Keane said.

“How can we not learn the obvious and painful lesson from Iraq,” he asked, and avoid pulling military forces according to a political time line?

McCain said he had called the hearing to underscore the varied threats and also press the Obama administration on its foreign policy.

President Barack Obama and his administration have “adopted a cheap fatalism” in claiming the various conflicts around the world have no military solution, McCain said in a statement submitted for the record. The senator was in Saudi Arabia on Tuesday and could not chair the hearing.

“Military power should not be used lightly, but it should also not be used anemically, or withdrawal precipitously,” he said.