Retired colonel, mentored by the Tuskegee Airmen, reflects on the 'marvel' of Obama 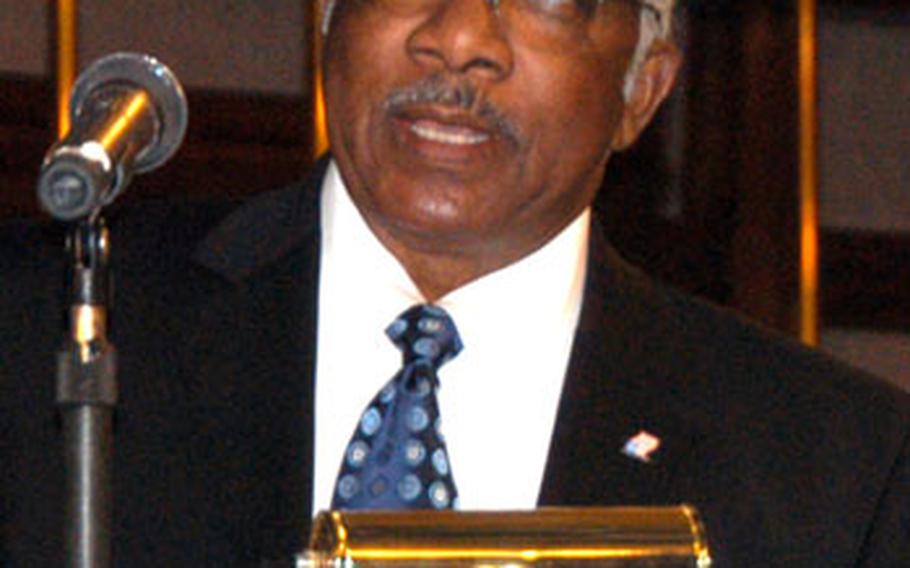 Retired Air Force Col. Richard Toliver, 70, shares his experiences as an airman during the Civil Rights era at a luncheon Friday at Kadena Air Base in Okinawa. (Natasha Lee / S&S)

KADENA AIR BASE, Okinawa &#8212; In reflecting on the legacy and hope championed by the Rev. Martin Luther King Jr., the marches, tear gas, beatings and cross burnings are images that stain the memory of retired Air Force Col. Richard Toliver.

But, he said, the long push for change has come full circle with the election of Barack Obama.

"I marvel at the fact that &#8212; he or I may not agree on social or economic views &#8212; but how the Lord has brought this young man to the forefront," Toliver said.

Just days before the country will witness the swearing-in of its first black president, Toliver spoke Friday to some 400 servicemembers and their families at Kadena Air Base about the country&#8217;s progression in overcoming racial and gender barriers.

As a fighter pilot during the Civil Rights era, Toliver, 70, witnessed the momentum and struggles of the movement to bring equality to blacks &#8212; which at the time, for Toliver, often evoked feelings of bitterness and anger.

But as he surveyed the diverse crowd here Friday, Toliver said progression was apparent.

Toliver said a handshake from King helped him confront his emotions and shaped his life as a messenger of faith and encouragement.

It was in 1957, after Toliver heard King speak to a congregation at Greenwood Missionary Baptist Church in Tuskegee, Ala., about the success of the Montgomery Bus Boycott.

It would be the first of his two encounters with King.

Toliver was then a student at the famed Tuskegee University, where he would later earn a degree in mechanical engineering before enlisting in the Air Force in 1963.

It was also at Tuskegee University where he was mentored by the original Tuskegee Airmen, including the Air Force&#8217;s first black four-star general, Daniel "Chappie" James.

As the first black military aviators who served in World War II, the Tuskegee Airmen broke their own color barriers.

Many are expected to be in attendance at Tuesday&#8217;s inauguration after receiving invitations from Sen. Dianne Feinstein, D-Calif.

But it was the handshake with King that was an indelible memory as Toliver spoke to the Kadena luncheon commemorating the slain civil rights leader&#8217;s birthday, now a federal holiday..

"I shook his hand that night and saw for myself the fire in this man that seemed pit from his very soul," Toliver said.

Toliver was now a First Lieutenant at Craig Air Force Base near Selma, Ala., and the marches from Selma to Montgomery to register black voters were underway.

"I saw the tear gas, heard the screams, saw deputies on horseback beating people," he said. "They were the most horrific sights and sounds I&#8217;ve ever witnessed in my life."

At King&#8217;s speaking engagement, Toliver tried to ask the civil rights leader about his stance against the Vietnam War, but he never got the chance. Three years later, King was gunned down in 1968 outside his motel room in Memphis, Tenn.

Toliver said the frustration and anger he felt from King&#8217;s death he later channeled into faith and determination.

A message, he said, that should resound with all servicemembers.

"Dr. King had taught me to do your job with the utmost ability because you never know how the Lord will use that," he said.

Toliver urged the crowd to "harvest the fruit of the dream."

"Look within yourselves to recognize and try to find the talent that God gave you to do something for other people," he said. "And don&#8217;t be afraid of the answer."

Toliver said his "harvest" arrived 30 years after King&#8217;s death, when he was hired to help restart the Southern Christian Leadership Conference, a civil rights organization which King helped found in 1957.

It was an opportunity that landed Toliver an invitation from King&#8217;s widow, Coretta Scott King, to worship at Ebenzer Baptist Church in Georgia, where King was pastor. Toliver said he sat in a pew with her and King&#8217;s sister, Christine.

"Can you imagine what I felt like, a thorn between two roses?" he said.

Toliver said there is always room for improvement in the military, but there&#8217;s none for excuses.

"The greatest change is that everybody has an opportunity to succeed," Toliver said in an interview following his speech.

"There&#8217;s no excuse for anybody to fail because of some ... perceptions. Racism is a human frailty not an institution."