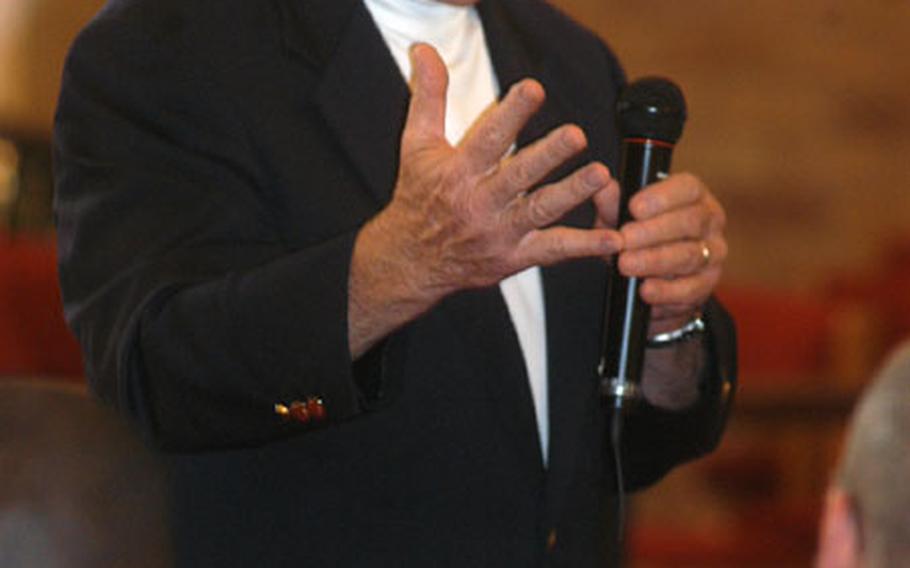 RAF MILDENHALL, England &#8212; Everybody knows how to do something, Robert Gaylor told his audience on Thursday.

And what does he do?

Boy, can he. For more than one hour, the fifth chief master sergeant of the Air Force used humor and the memories of 31 years in the Air Force to have nearly 300 airmen in the base chapel rocking with laughter, applauding and, finally, on their feet with an ovation.

Perhaps, too, he gave them something to think about.

Gaylor, 74, joined the military in 1948 and retired in 1979, before many in his audience were born. But his presentation proves funny stories and common sense have no generational bias.

Since about 1996, he has been traveling to Air Force bases around the world to deliver his motivational message, forsaking any pay except the usual travel per diem. When not talking to troops, he addresses corporate audiences, which do pay him for his words of wisdom.

Gaylor, who is in England to attend master sergeant promotion ceremonies at both RAF Mildenhall and RAF Lakenheath this weekend, has an easy way with a funny line.

He said he has been married to his wife Selma for 51 years and then revealed their secret.

But his humor often is to make a point. To illustrate his belief that everyone has the potential to be the most important person on the base, he told a story about Whiteman Air Force Base, Mo., at the start of the war against the Taliban in Afghanistan.

Two B-2 stealth bombers were about to leave on a 44-hour mission. Everyone on base turned out, but in a final pre-flight check, someone noticed there was no food on board for the crews. An order was made and an airman soon pulled up at the aircraft.

&#8220;He leaped out with box lunches and got a standing ovation,&#8221; Gaylor said to laughter. &#8220;At that moment, the dude with the bologna sandwiches was the most important person at Whiteman AFB.&#8221;

Some in the audience had heard Gaylor before and asked for particular stories. He granted one request for the &#8220;salad story.&#8221;

In this one, he told of visiting Spangdahlem Air Base, Germany, some years ago and meeting the food service crew, including the airman who diced radishes.

The story illustrates the importance of attitude, he said.

But, he said, attitude is often a result of leadership. Of the unhappy radish dicer, he said, &#8220;I suspect if you look at his chain of command, you will find a very weak supervisor.&#8221;