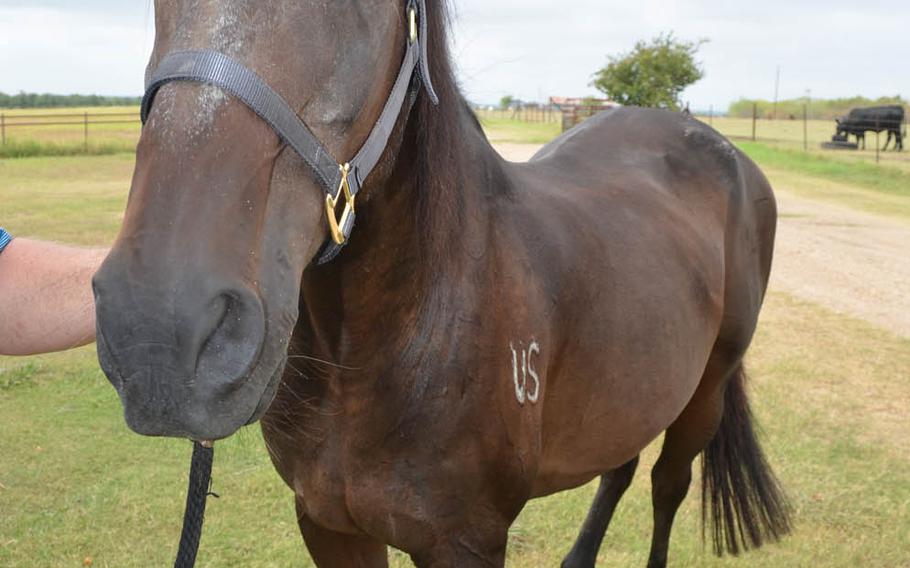 Buy Photo
Travler is seen at his new home, the WyldWynd Ranch in Cameron, Texas on Sept. 3. (Rose L. Thayer/Stars and Stripes)

Buy Photo
Travler is seen at his new home, the WyldWynd Ranch in Cameron, Texas on Sept. 3. (Rose L. Thayer/Stars and Stripes) 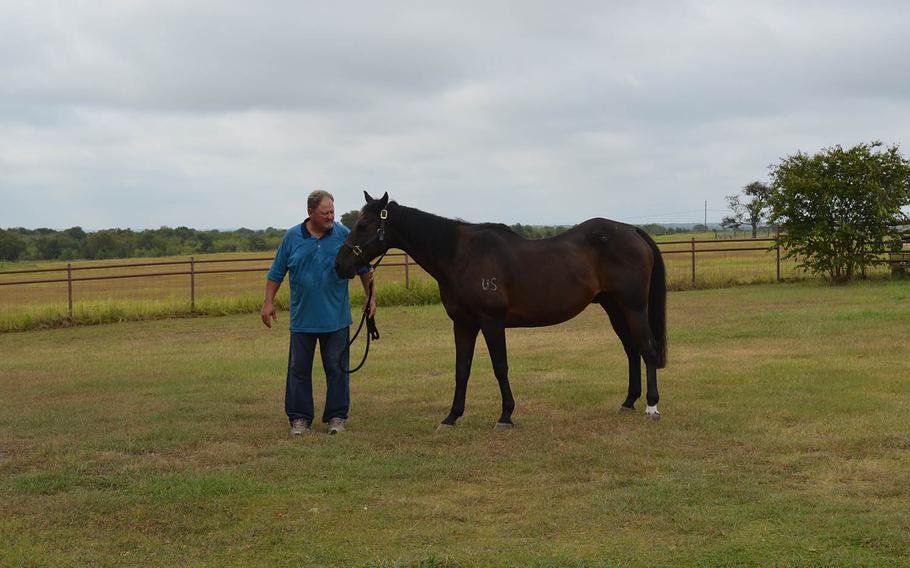 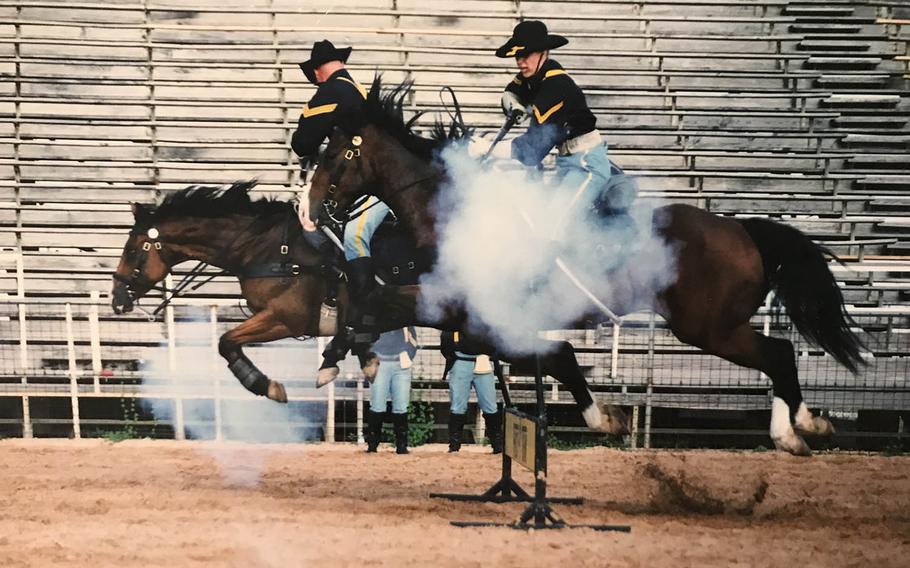 April Naiman rides Big Ben in a cavalry charge during her time as a trooper in the detachment from 2000 to 2004. (Photo Courtesy of April Naiman) 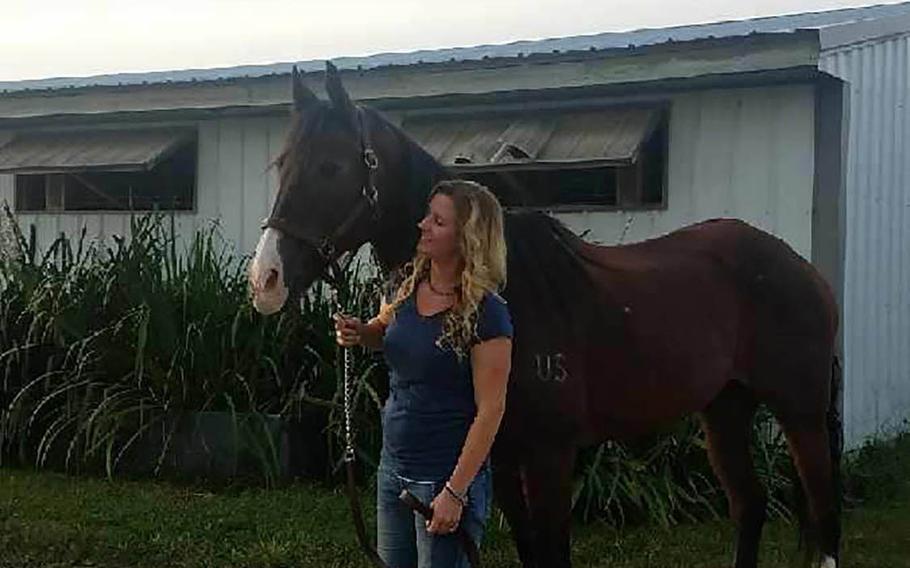 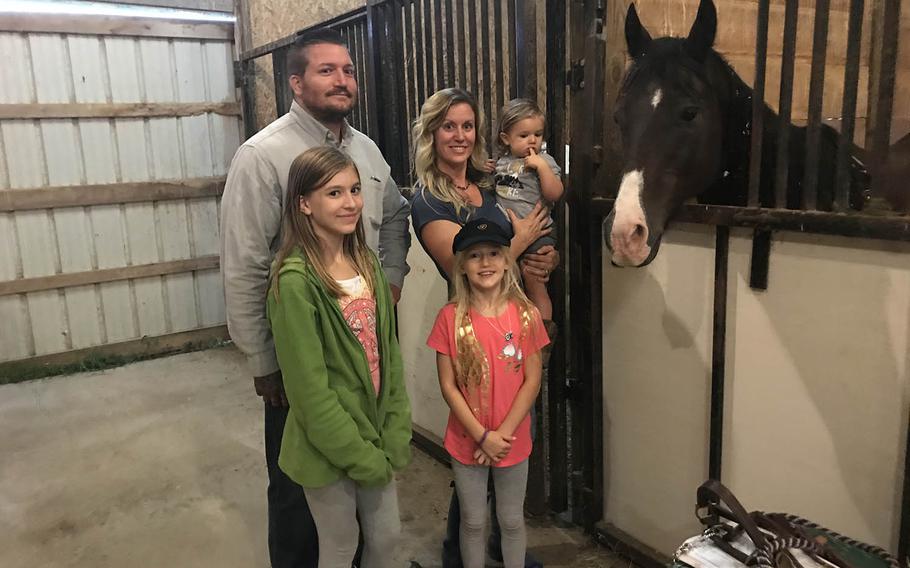 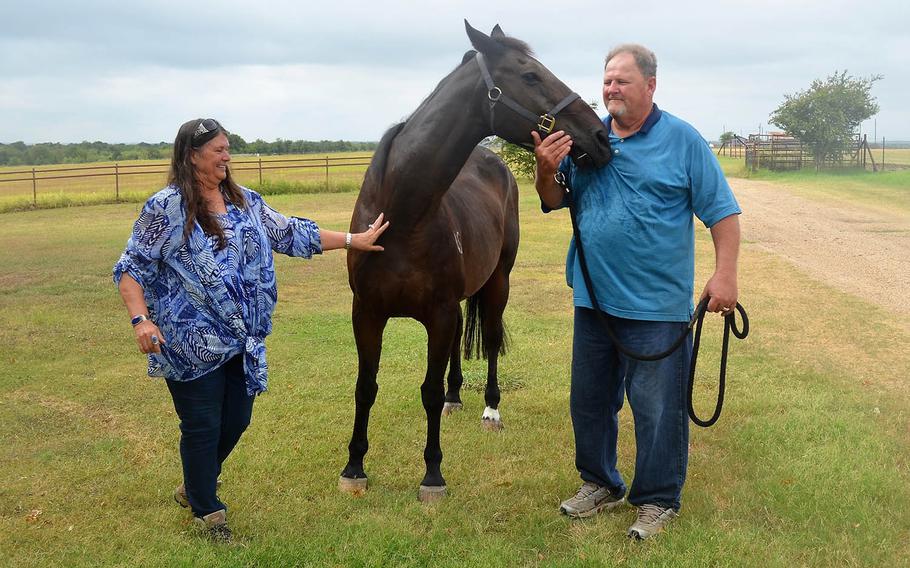 April Naiman spent nearly four years — the entirety of her Army service — riding a horse named Big Ben in the 1st Cavalry Division Horse Cavalry Detachment. They rode together in the 2003 Tournament of Roses Parade in Pasadena, Calif., then they galloped up the mountain to the famous Hollywood sign. They traveled through many small Texas towns for parades and participated in countless cavalry charges for division ceremonies.

“He was one of the fastest horses in detachment at that time, so when we’d do cavalry charges … I had to do my best to hold him back as far as I could. Once we were gone, that was it. If I wasn’t careful we’d end up way out in front of everybody,” said Naiman, 37, who left the Army in 2004 as a sergeant.

That time with the detachment changed her life. Naiman entered the Army as a medic, expecting it to lead to a career in that field. Instead, years of riding experience landed her in the horse detachment, where she quickly rose to the top riding group and worked as the military trainer alongside the civilian trainer. After leaving the Army, she went to the University of Findlay in Ohio and earned a bachelor’s in equine business management.

Since then, she always dreamed of adopting Big Ben and bringing him to her 23-acre farm in Oxford, Ohio, where she lives with her three children and Navy veteran husband. This month, that dream came true.

“I never thought he’d be in Ohio with me, and my kids would get to hang out with him and meet him and ride him,” she said. “It feels like everything is coming full circle. I’m beyond excited.”

A new adoption policy, part of Title 10, U.S. Code on military animals, will allow Big Ben, now 25 and five years into retirement, and other retired detachment horses to spend the remainder of their lives with second families outside the Army.

“We’re doing this because we really want them to enjoy being a horse in their golden years,” said Capt. Jenny Nocella, detachment commander. Before the policy, which was implemented in May, the detachment’s quarter horses lived out their retirement on pasture rotation just outside the main gate of Fort Hood in Texas.

“The best reward is knowing he is so well loved and taken care of,” Nocella said, emphasizing that the older retired horses were never a burden on the unit and that the soldiers aren’t looking to pass off responsibility. Just like soldiers who leave the Army to find a civilian life, the detachment wants the same for these horses. One retired horse, Jethro, is unavailable for the program because he has a heart condition that requires 23 pills a day. Nocella said they couldn’t ask a family to take on such responsibility.

Big Ben is the second horse the detachment adopted this summer. The first was Travler, a 30-year-old whose career highlights with the detachment include many Rose Parades and an inauguration parade in Washington for then-President George W. Bush. Naiman said she was away at training during the 2001 parade, so she and Big Ben missed out.

On Aug. 3, Travler moved to his new home with Wanda and Tony Noakes at the 47-acre Wyldwynd Ranch in Cameron, Texas, about 60 miles east of Fort Hood. Tony Noakes, 58, is a retired sergeant major, who, as a cavalry scout, spent a portion of his 28-year career in 1st Cavalry Division units at Fort Hood. His 2008 retirement ceremony took place at Hood and included a cavalry charge from the horse detachment. He continues to work on post for a contractor.

The horse has his own enclosure neighboring gypsy van horses, Tennessee Walking Horses and Brangus cows. Wanda Noakes, 65, said Travler will occasionally reach his head over the fence to groom Shawnee, a gypsy van yearling who is quite taken with her new neighbor.

Other than being too old for an adult to ride, Travler doesn’t act like a 30-year-old horse, Wanda Noakes said. The average horse lives to be 30 to 35.

Because of Travler’s military training, Noakes said the horse is easy to keep. He stands still for grooming, is polite when she feeds him and loves carrots.

While Big Ben hasn’t been ridden in a couple years, he is younger than Travler and physically fit enough for it. Naiman said she looks forward to getting this opportunity again and sharing it with her children, ages 12, 8 and 2.

The idea to adopt out retired horses from the detachment began about four years ago as a way to “make sure those horses got to spend their time outside the Army with families who love and adore the organization,” Nocella said.

“For us, it’s more for the personal aspect,” she said. “We want to see these horses go and see something else. Here in this pasture, they can still hear a cannon go off every day.”

They aren’t startled. When they hear it, they are ready to go to work, she added.

Government organizations take priority when adopting horses that might have some years of work left in them, followed by anyone who meets the requirements, which include having the right acreage for a horse – two acres for the first horse and an acre more for each additional horse – and the ability to provide proper care, feeding, facilities and any special requirements the elderly horse might have.

“Anything he would have received here, we make sure he’ll receive at his next home,” Nocella said, adding they’ve had no trouble finding adoptive families to take on the horses.

Anybody can apply and there is no fee to adopt – just supporting the horse financially, which Wanda Noakes estimated at $300 a month.

The Noakeses happen to live near Fort Hood, but there are no restrictions on distance as long as the horse is physically able to make the trip. Naiman was responsible for providing transportation for Big Ben’s weeklong journey from Texas to Ohio.

Nocella said she hopes to see some equine therapy groups apply for adoptions as well.

The detachment, created in 1972, is home to 31 quarter horses, three mules and a dog. The animals are cared for by the detachment’s 32 soldiers and civilian stable master. Soldiers also learn skills such as leatherworking and saddlery, farrier skills to shoe the horses and maintainance of the unit arms’ room, which includes Colt revolvers, the weapon used by 1880s cavalrymen. This teaches soldiers special skills and allows the detachment to be self-sustaining.

There’s one more retired horse at the detachment, and its adoption availability will be announced in the coming weeks, Nocella said. Following the trend of similar adoption programs at Fort Riley, Kansas; Fort Sill, Oklahoma; Fort Irwin, California; and the Old Guard in Washington, adoptions are announced on the unit’s Facebook page. The first two horses each drew four interested parties.

When Wanda Noakes saw the announcement about Travler, she was on pins and needles with excitement. During her husband’s time at Fort Hood she said she often would park at the visitor’s center and watch the detachment’s horses in the nearby pasture.

Having Travler “is something I can do for the Army. It’s something that pays back. That’s huge for me,” she said.

Tony Noakes was completely on board with the adoption.

“She already takes care of one cavalryman. She can take care of another,” he said.