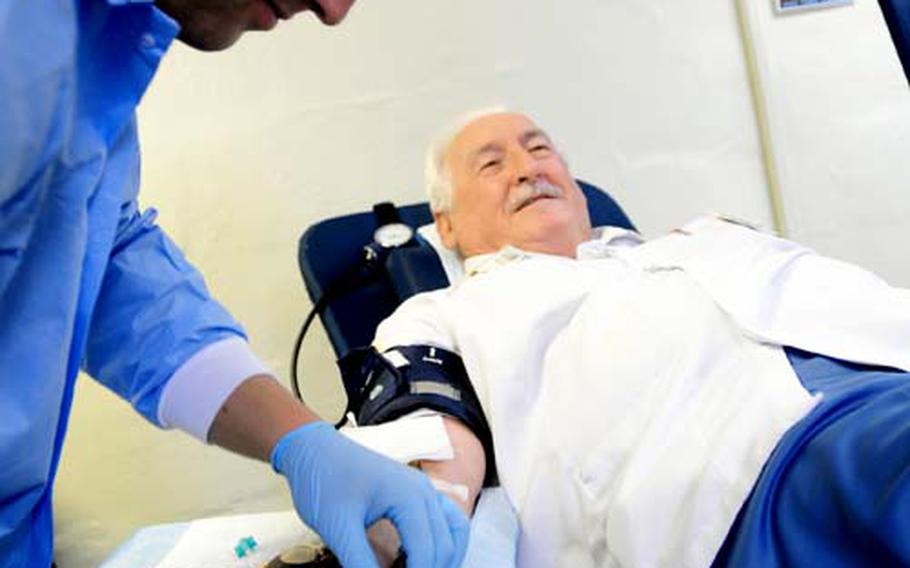 Petty Officer 3rd Class Jason Schrunk prepares to complete the blood drawing process as 76-year-old retired Air Force Staff Sgt. Dennis Provencher donates his 34th recorded gallon of blood Thursday at the American Red Cross Center on Camp Foster. Provencher has been regularly donating blood since arriving on Okinawa in 1961 and is currently recognized by the Guinness Book of World Records as donating more blood than anybody else. (Matt Orr / S&S)

He plans to do it again two months from now.

Provencher, 76, was recognized in 2004 by Guinness World Records as having donated more blood than anybody else.

To date, with 46 years of donating blood, his total is 34 gallons.

Born in Milton, N.H., Provencher enlisted in the Air Force in 1951. Ten years later, the radio operator received orders to Okinawa. He said he fell in love with the island and its people and kept extending his assignment until he retired in 1971. He has been donating blood since his arrival.

Provencher said he will continue to donate for as long as he can.