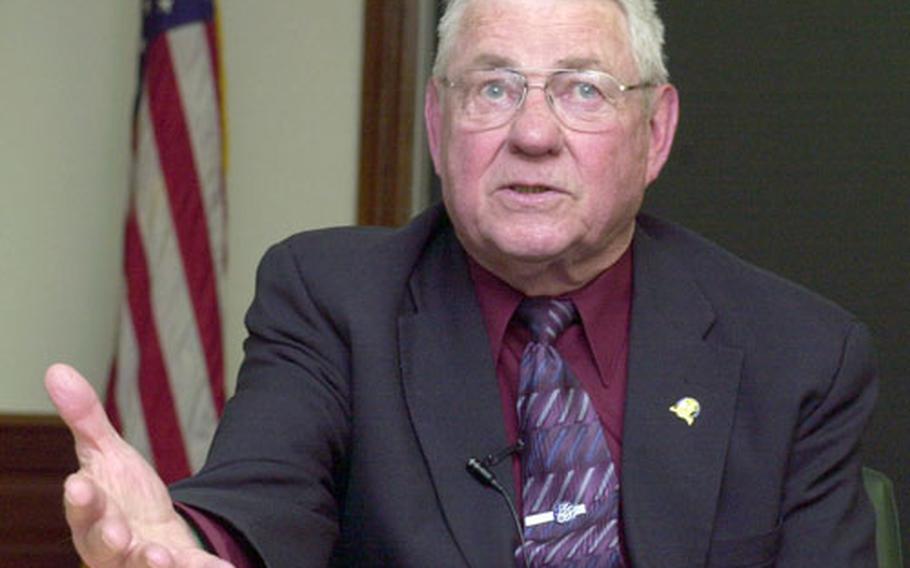 Robert Gaylor, who retired in 1979 as the 5th Chief Master Sgt. of the Air Force, visited Yokota Air Base on Tuesday. (Christopher B. Stoltz / S&S)

YOKOTA AIR BASE, Japan &#8212; Technological advances and a huge training push in the past 25 years are the driving elements behind mission success in today&#8217;s leaner military, a former chief master sergeant of the Air Force said Tuesday.

Robert Gaylor, who retired in 1979 as the fifth person to occupy that post, is wrapping up a Pacific tour which included stops at Osan and Kunsan air bases in South Korea. He&#8217;s met with airmen from dozens of units and appeared at the 5th and 7th Air Force annual awards ceremonies.

The dynamic Gaylor routinely visits bases and other organizations to speak about management techniques and his experiences over a 31-year career that began shortly after World War II.

He says the Air Force has shifted dramatically in the last quarter-century.

Gaylor, who spent 18 years as a military policeman, including assignments at Kunsan and the old Tachikawa Air Base in Japan, also said greater emphasis on education has created new opportunities within enlisted ranks.

Fair play, communication, integrity and consistency are the marks of a strong leader, he said.

Gaylor, who visited 33 bases in 2005, said he&#8217;s motivated by his desire to remain part of the Air Force and enjoys sharing thoughts with today&#8217;s troops.

&#8220;What a great honor for us that he can share his experience and leadership with our airmen,&#8221; she said.

Gaylor lives in San Antonio. Later this year, the NCO Academy at Lackland Air Force Base, Texas, will be dedicated in his honor.