Restriction: Shape up or ship out 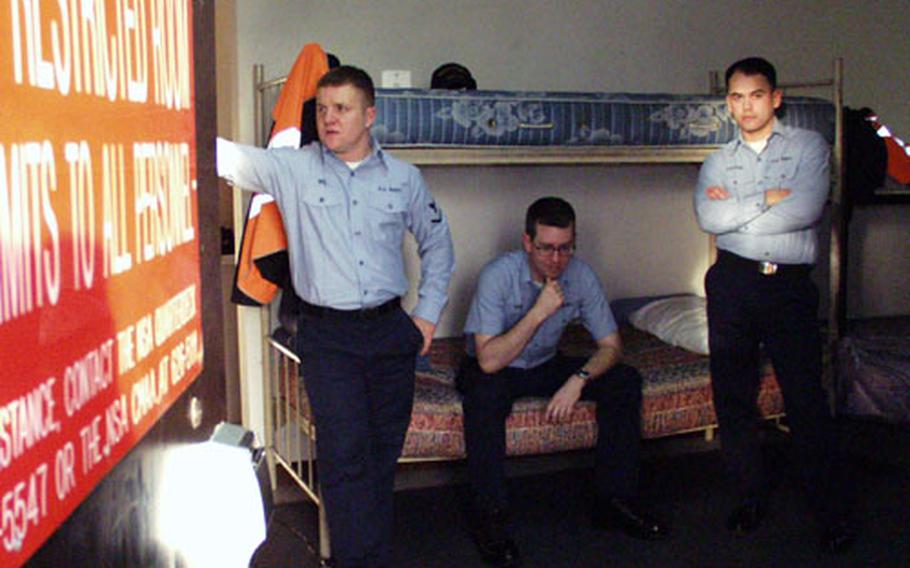 From left, Petty Officer 3rd Class Travis Rice, Seaman Dan Marsh and Seaman Jaime Castano hang out in their restricted barracks room at the Navy’s Capodichino base in Naples. The red sign on the door notes that the room is restricted. The room’s only furnishings are bunk beds, and sailors aren’t allowed to add any personal touches to the room or bring in personal belongings such as music or computers. (Kendra Helmer / S&S)

From left, Petty Officer 3rd Class Travis Rice, Seaman Dan Marsh and Seaman Jaime Castano hang out in their restricted barracks room at the Navy’s Capodichino base in Naples. The red sign on the door notes that the room is restricted. The room’s only furnishings are bunk beds, and sailors aren’t allowed to add any personal touches to the room or bring in personal belongings such as music or computers. (Kendra Helmer / S&S) 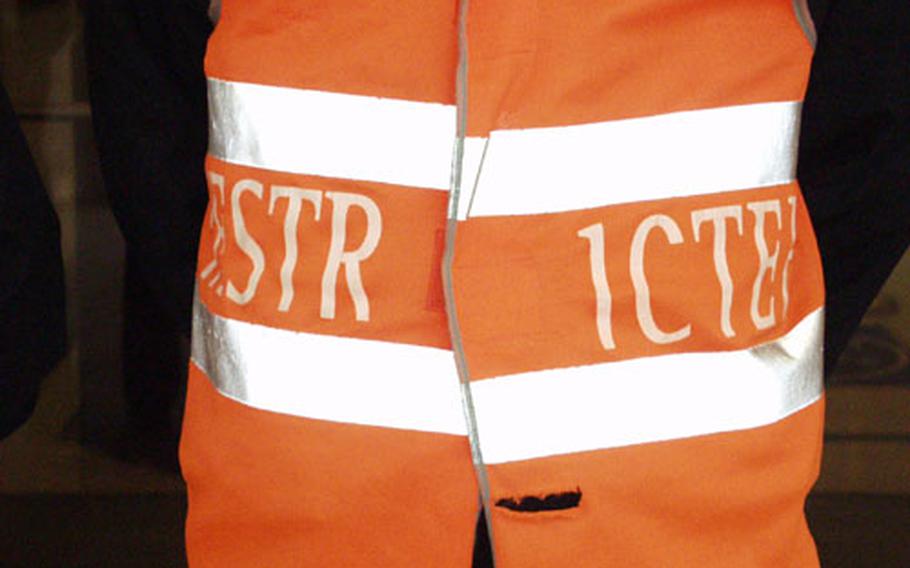 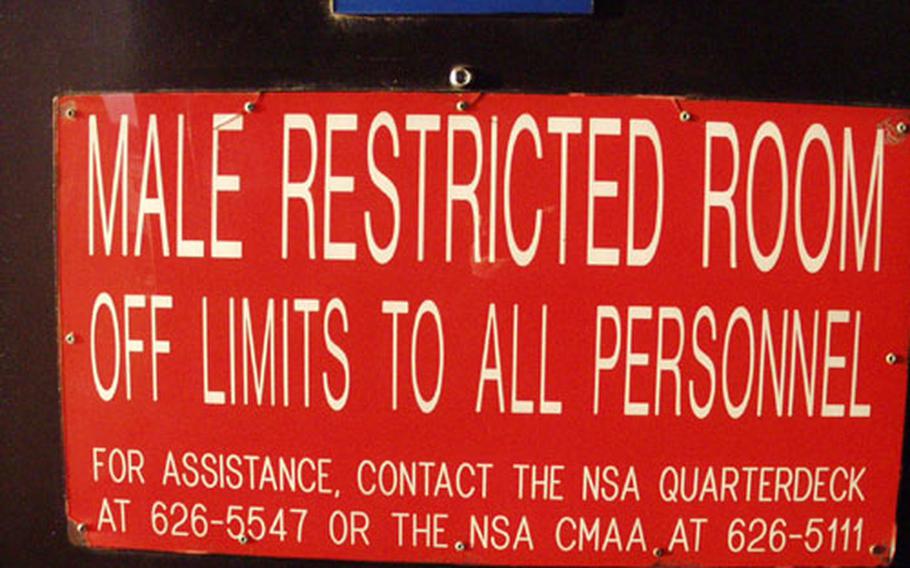 There are two barracks rooms designated for restrictees -- one for men, one for women -- at the Navy’s Capodichino base in Naples. (Kendra Helmer / S&S) 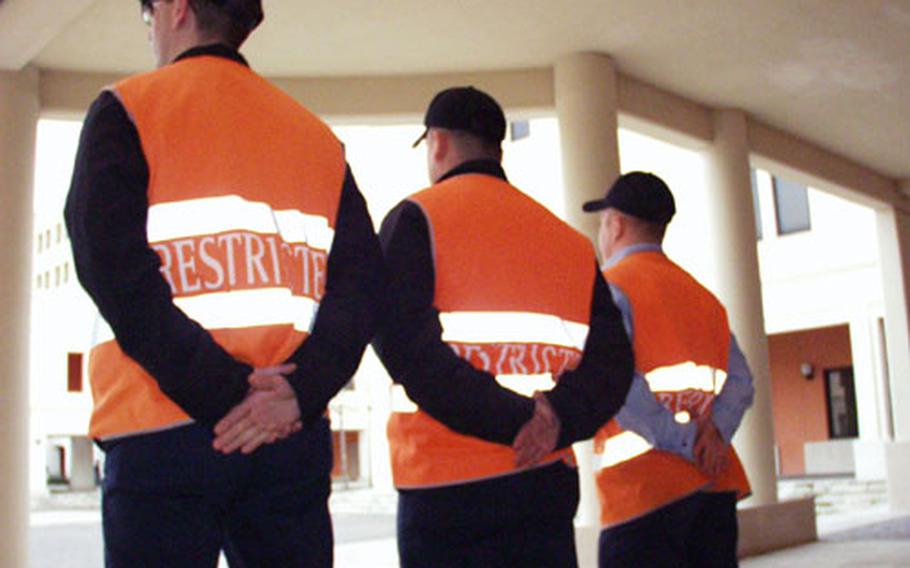 Sailors on restriction must muster several times a day at the quarterdeck on the Navy’s Capodichino base in Naples, Italy. (Kendra Helmer / S&S)

What you do have: a new uniform accessory, a bright orange vest that screams &#8220;RESTRICTEE,&#8221; so when you leave the barracks room everyone knows you&#8217;re being punished.

That&#8217;s life for sailors on restriction at the Navy&#8217;s Capodichino base in Naples.

Restriction is a nonjudicial punishment for violations of the Uniform Code of Military Justice. The commanding officer spells out the specifics of restriction, which can last up to 60 days.

Restriction reinforces the notion of discipline for servicemembers who are running into trouble, military officials say.

&#8220;It provides COs with some teeth, but it&#8217;s not some final blow to a sailor,&#8221; said Lt. Michael Turner, Staff Judge Advocate for Naval Support Activity Naples.

He said that, as a nonjudicial punishment, it&#8217;s not meant to be a permanent mark on a servicemember&#8217;s record.

Restriction &#8220;provides the opportunity to increase the military bearing of an individual,&#8221; he said.

When deciding punishment, Frederick said, he considers the nature of the offense and what he learns about the sailor at the captain&#8217;s mast &#8212; or disciplinary hearing.

Offenses for which he might hand down restriction include public drunkenness or fighting &#8212; a visible punishment for a visible wrongdoing, he said.

Or it may be as a punishment for financial irresponsibility, where the sailor couldn&#8217;t afford a fine or a reduction in rank.

Restrictees in Naples carry a set of orders with them, a five-page explanation of the rules they must follow once their command has turned them over to the Chief Master-At-Arms Office.

Red &#8220;off limits to all personnel&#8221; signs adorn the doors of the two restricted barracks on Capodichino &#8212; the room for men is adjacent to one for women.

On a recent afternoon, three restricted sailors sat on their bunks (there are no chairs in the rooms) to talk about life as a restrictee.

The rock-paper-scissors game is another favorite.

Then there&#8217;s the popular game that involves sailors making a mad dash to tag the doorknob after someone passes gas.

Seaman Dan Marsh, 27, said that as an easily bored person, the punishment is torturous. The cryptologic technician got 60 days&#8217; restriction and had his top-secret clearance put on hold for reasons he didn&#8217;t want to discuss. It was his second time on restriction; the first was for not paying bills.

Restrictees can read only official Navy material or approved military-related books from the library.

Around Christmas, he said, the restrictees were promised a phone call and e-mail home, but that didn&#8217;t happen.

Restrictees start mustering at 6:30 a.m.; the last muster is 9:45 p.m. They march in step to the quarter-deck and stand at attention or parade rest eight times daily during the week, nine times a day on weekends and holidays.

After their first muster, they do odd jobs for various base departments until around 4 p.m.

The master-at-arms office gets about 15 requests a day for the restrictees&#8217; help, said Petty Officer 1st Class Roberto Maqueira, one of two master-at-arms in charge of the restrictees. He makes sure they obey orders and see counselors if necessary, and he inspects their rooms and uniforms.

Jobs include taking out the trash, cleaning offices and tossing mail.

The most repulsive? Cleaning out the dog kennels, the sailors said, wrinkling their noses and going into a bit too much detail.

&#8220;With the exception of physical fitness clothing while exercising, you may not wear civilian clothing.&#8221;

The rules say restrictees don&#8217;t have to wear vests in the dining hall, but for a short period that changed, they said.

Seaman Jaime Castano, 24, does like one of the changes: gym privileges. There were none the first time he was on restriction, for driving under the influence. But with the new commanding officer came a new rule: trips to the gym a few days a week &#8212; escorted, of course.

Castano recently finished his second restriction &#8212; 45 days for driving after he had lost his driving privileges.

The restrictees said that while some sailors avert their gaze when they see them, the vest invites remarks from higher-ranking sailors.

No guests are allowed in the restriction rooms, though restrictees can meet visitors on Sundays and holidays from 1 to 3 p.m. in a lounge. Restrictees can make escorted trips to the ATM and shop for toiletries.

Weekends are particularly dull, they said. They do laundry and clean their room. Not that there&#8217;s much to clean &#8212; just bunk beds, a fridge and a bathroom. Then it&#8217;s just more staring at the walls, more inventing games.

Such inspections have turned up carry-out food, DVD players, pornographic magazines and male and female restrictees in each other&#8217;s rooms, said Seaman Nicholas Garrett, 22, who escorts the restrictees.

On one random Saturday check, three guys who had sneaked out of their room found their freedom short-lived.

Garrett found one sailor in his room on his computer. &#8220;Man, his face went white,&#8221; Garrett laughed. Another restrictee was found with his half-undressed girlfriend. The other missing restrictee heard they&#8217;d been discovered, so he high-tailed it back to the quarter-deck.

Garrett said some restrictees go to extremes to get attention, such as making themselves sick by drinking lots of mouthwash.

He has seen both sides of restriction &#8212; he got 15 days for misuse of government computers.

Rice still has a few weeks of restriction. Castano and Marsh got off restriction just in time for New Year&#8217;s Eve.

But Marsh and Rice still see plenty of each other &#8212; Marsh is now working for the master-at-arm&#8217;s office, watching over the restrictees.

It&#8217;s usually pretty easy to spot a sailor who&#8217;s restricted to base. The bright orange vest is a dead giveaway.

But for airmen and soldiers, the punishment generally is less visible.

&#8220;In the Air Force, it&#8217;s done much more privately&#8221; than in the Navy, said Maj. John Madsen, chief of general law at U.S. Air Forces in Europe headquarters. He said he isn&#8217;t aware of any airmen forced to don something identifying them as a restrictee, as is the case on many ships and Navy bases.

&#8220;A commanding officer has broad discretion to run their restricted program as they see fit,&#8221; said Lt. Michael Turner, Staff Judge Advocate for Naval Support Activity Naples in Italy. &#8220;It&#8217;s not unusual for [restrictees] to wear vests; it&#8217;s a well-accepted policy and practice.&#8221;

&#8220;You line up the whole organization, and the captain stands up in front so everybody gets to see what&#8217;s going on. Everybody gets to hear Johnny&#8217;s story and the skipper give the punishment,&#8221; he said.

In most Article 15s, the servicemember doesn&#8217;t have to face so many spectators.

But the restrictee may be the object of some stares after the punishment commences, as is the case at the Navy&#8217;s Capodichino base in Naples.

Restrictees wear orange vests, march in formation, muster regularly and stay in designated rooms that are sparsely furnished and devoid of personal effects.

Restricted airmen and soldiers usually don&#8217;t muster, but may have to report to a supervisor, said Madsen and U.S. Army Europe legal experts. A typical restriction for a soldier may limit him to the barracks, chapel and dining facility, said Bruce Anderson, USAREUR spokesman.

Airmen and soldiers also usually stay in their own barracks rooms. In the case of a restrictee living off base, the unit may provide a dorm room.

Airmen and soldiers normally perform their normal duties and may have extra duties after normal work hours.

Numbers were available for Sigonella, Sicily and Naples, Italy. In Sigonella, (including its tenant commands), 124 people were put on restriction in 2002. In Naples, 40 sailors were restricted last year. Some of those include repeat restrictees.