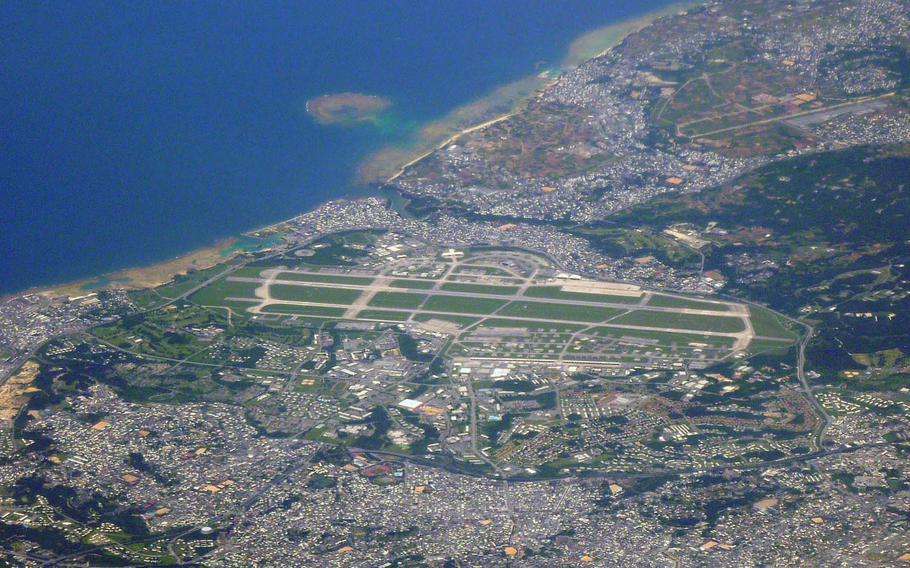 An aerial view of Kadena Air Base on Okinawa, Japan, in May 2010. Okinawan officials have requested access to the base to perform water tests after a banned organic compound was discovered in streams running through the base and in adjacent groundwater wells. (Courtesy of Wikicommons)

CAMP FOSTER, Okinawa — Kadena Air Base has offered reassurances that its water is safe to drink even though high levels of a restricted substance were discovered in streams running through the base and in adjacent groundwater wells.

Okinawan officials have requested access to the base — home of the U.S. Air Force’s 18th Wing — to perform water tests to help determine the source of perfluorooctane sulfonate, an organic compound found in fire extinguishing foam, hydraulic oil for aircraft and stick-resistant and water-repellant materials, along with other uses. Officials said it isn’t clear whether the material recently leaked or could be from past contamination.

The compound was detected in water samples taken in the last couple of years from the Dakujaku River, according to officials from the Okinawa prefectural enterprise bureau, the local water treatment authority. The river runs through the base and flows into the Hija River, the Nagata Pumping Station and wells on the sprawling base.

Okinawan and base officials said there is little risk of exposure because the local drinking water is adequately treated at the Chatan Water Treatment Plant, which supplies water locally and to the base.

“If the use of the substance is confirmed on the base, we call for an immediate suspension of the use,” said Akira Oshiro, senior coordinator for the water supply division of the bureau. “If no substituting agent is available, the prefectural water supplying bureau will demand the air base take proper measures for its disposal.”

While there is little data or study on the effects of their exposure to humans, perfluorinated compounds have been known to cause death, tumors and increases in body and organ weight in animals, Okinawan officials said. The compound has been restricted to limited uses in Japan and the United States.

“Taking that into consideration, we assume that its use on base is also restricted. It is necessary to identify the origin of the contamination and call for control of the discharge of the substance to the responsible party,” Oshiro said.

Pacific Air Forces released a statement to base workers and employees Sunday. Stars and Stripes asked about the contamination last week.

The Air Force did not say whether the compound is still in use on base or if it believed the contamination could be attributed to prior use. However, the statement said base water is safe because it is treated before it reaches consumers.

“The base continues to comply with current Japanese Environmental Governing Standards, which are equivalent to the U.S. Safe Drinking Water Act that is enforced by the [Environmental Protection Agency]. Be assured that your drinking water is safe,” the statement said.

Between February 2014 and November 2015, bureau surveys found perfluorooctane sulfonate levels ranging from one to 543 nanograms per liter, with the highest levels being discovered at pump stations for the Hija and Nagata rivers. In the U.S., a provisional health advisory is issued at 200 ng/L.

Japan has been studying the safety of the compound since 2009, but no guidelines on how much is safe have been issued.

“Use of [perfluorooctane sulfonate] has been restricted under Japanese law since 2010,” Oshiro said. “It is also restricted in the United States.”