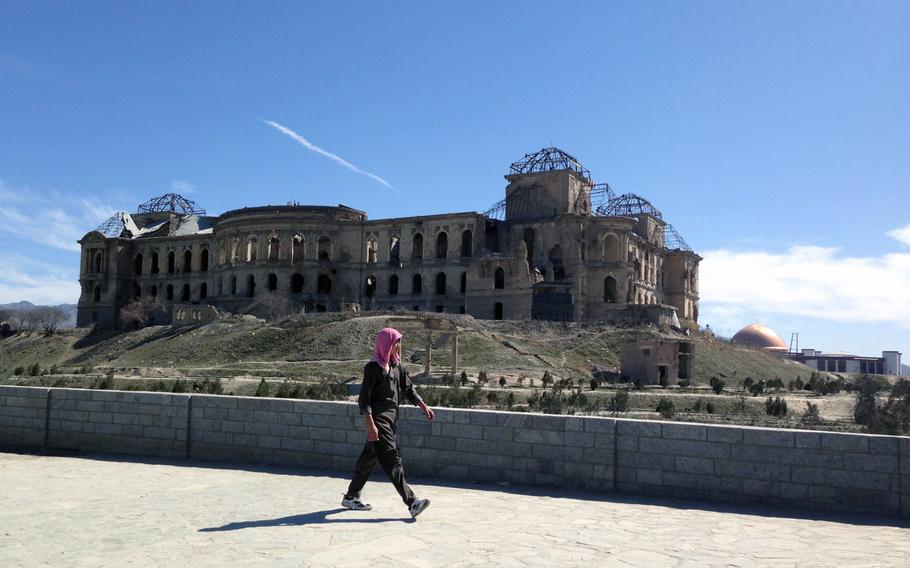 A pedestrian passes the remnants of Kabul's Darul Aman Palace earlier this year. On Monday, May 30, 2016, Afghan President Ashraf Ghani inaugurated a project to restore the palace, built nearly 100 years ago to house the national parliament. The building was destroyed in the 1990s during Afghanistan's civil war. (Slobodan Lekic/Stars and Stripes)

KABUL, Afghanistan — Afghan President Ashraf Ghani on Monday inaugurated a project to restore the capital’s imposing Darul Aman Palace, a once-grand hilltop structure that’s been a dusty ruin since the civil war in the 1990s.

A tourist attraction for soldiers, diplomats and others for the past 15 years, it is a scarred reminder of Afghanistan’s troubled history. Given a name meaning “Abode of Peace” in Arabic by Afghanistan’s reformist King Amanullah, who sought to modernize the country in the 1920s before being forced into exile by religious fundamentalists, it has suffered decades of war.

The three-year, $16-million reconstruction project is “a grand plan to restore the country’s past glory,” Ghani said during the ceremony. The renovated palace will include a museum and will host national ceremonies and state guests.

The structure was originally intended to house the national parliament but was never used for that purpose. A nearly $100 million parliament building nearby was dedicated in December.

The palace has served an array of functions instead, including storage space for raisins, mujahedeen base camp and home to several government agencies.

It was twice burned down, victim to an electrical fire in 1968 and Soviet special forces in 1979, and was rebuilt both times. Artillery and rocket fire during the civil war in the 1990s destroyed it again.

On Twitter, Afghan Chief Executive Abdullah Abdullah, who attended Monday’s ceremony with the president, called the project “our investment on the past and on the future.”