Restaurants, bars hurting outside US bases on Okinawa 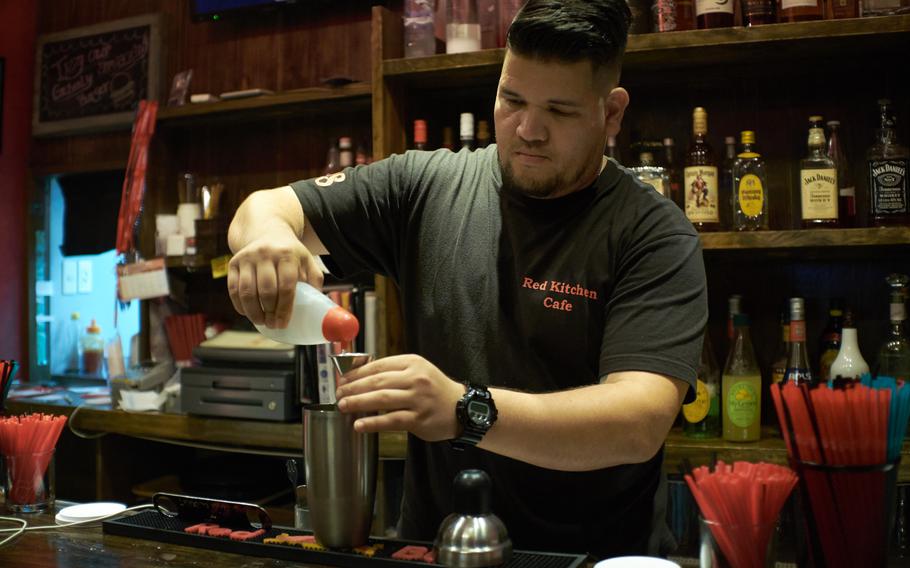 Rodrigo Watanabe mixes a non-alcoholic drink for a military customer at the Red Kitchen and Cafe June 17, 2016 in Okinawa City, Okinawa. Watanabe, who manages both the popular bar and grill and another club in the area, was forced to lay off 10 employees between the two establishments because of the liberty and alcohol sales restrictions on military personnel on the island. He hopes to rehire all of them once the restriction period is lifted. (James Kimber/Stars and Stripes)

OKINAWA CITY, Okinawa — Gate 2 Street is the heart of Okinawa City’s nightlife, and it’s normally teeming with troops on Friday nights as restaurant staffers hawk the day’s specials and mini-skirted women from the nearby gentlemen’s clubs head outside to line the district’s bright lights.

But the street looked more like a sedate Tuesday afternoon as the men and women from nearby Kadena Air Base and Camp Foster, their wallets stuffed on a payday weekend, never left the gates, leaving a small collection of curious Japanese tourists and regulars getting accustomed to the strange new silence.

For almost a month now, Lt. Gen. Lawrence D. Nicholson’s “period of unity and mourning” has been in effect. It restricts all military personnel on the island, regardless of rank, from purchasing alcohol off base and puts the military community on Cinderella Liberty as the fallout from the alleged rape and slaying of 20-year-old Rina Shimabukuro and other crimes by troops.

A week after Nicholson’s order came a wrong-way crash involving a Navy sailor with a high blood-alcohol level. The Navy then prohibited all alcohol-consumption for its 18,600 Japan-based sailors and restricted sailors to their bases for four days. Though Navy officials eased other restrictions 11 days later, sailors are still indefinitely prohibited from purchasing alcohol off base.

While the restrictions have limited the number of alcohol-related incidents off base to a single case — the wrong-way crash — the prohibition to “patronize clubs and bars” has battered the local economy in Okinawa.

“Eighty-five percent of our clientele are military. And honestly, that’s probably a low-ball number,” said Rodrigo Watanabe, general manager of the normally bustling Red Kitchen and Cafe. “Friday nights, there wouldn’t be any space in here. There would be five to seven employees working. But I’ve had to lay off two employees to survive. I hate to do it because I am also worried if they can pay their bills.”

Red Kitchen and Cafe is able to stay open because its American menu still draws military men and women to eat. However, Watanabe feels many servicemembers remain on edge knowing any otherwise minor incident could derail their careers. He said that’s why many base residents decide to just stay away for now.

The bar and grill has changed its hours from dinner and late-night drinks to serving lunch and dinner and closing at 9 p.m.

The cafe’s sister club, Black Rose, had to close for the month with hopes that Nicholson will soon end the prohibition on buying booze off base.

“I have five employees there who were asking for me to let them work here,” Watanabe said. “It’s hard to tell them I can’t afford it. It’s hard to do that to people you care about.”

Ariel Morano is well known to the area. After graduating from Kubasaki High School at Camp Foster some 30 years ago, he began working around Gate 2 Street.

“Every time this happens, we see a bar go bankrupt. Another restaurant has to close its doors for good. I’m not talking about the chains or the ones with multiple locations, just the small family-run places. These restrictions really hurt them the most. They’re the ones getting punished,” Morano said.

Ryan Haymie, co-owner of Paddy Mac’s Irish cafe, is another long-time Okinawa resident feeling the pinch. He first arrived on the island 17 years ago while in the Air Force, married a local woman, started a family and retired three years ago as a master sergeant. After obtaining permanent residency, he bought into the pub that has long been a fixture.

“Part of the reason I put in my retirement papers as soon as I could was because I was tired of being treated like a child here,” Haymie said. He is always smiling and joking, but there’s a hint of boredom and anger in his voice. “I’ve seen these curfews and restrictions come and go. I’ve been on the other side of them. It’s (crap), you know. But that’s the risks you take serving the military community in Okinawa.”

Haymie has used the time as best as he could. He’s refurbished the dart board area, reorganized the storage room and is in the middle of completely redesigning the women’s bathroom.

After the night’s only customer left — “We normally have about 1,500 customers over a payday weekend,” Haymie said — the retired airman went back to wiping down tables and moving bottles from one side of the counter to the other. “I heard the U.S. bases won’t be celebrating July 4th with fireworks because it’s inappropriate or something,” he said. “I really hope that the ban isn’t extended until then.”