Respect goes both ways when airman trains with Marines 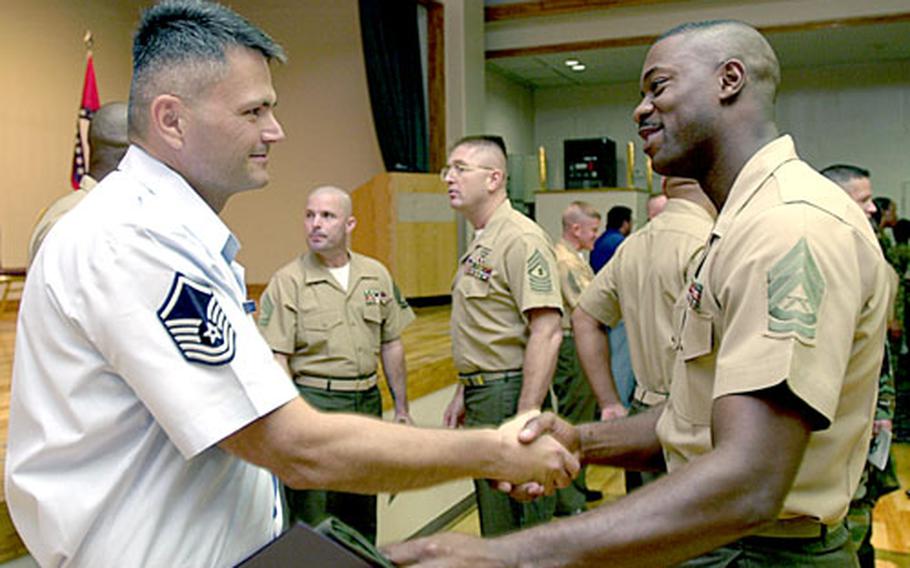 Then, he said, he got to know some Marines while attending the seven-week Advanced Course at the Staff Noncommissioned Officers Academy at Camp Hansen. The gunnery sergeant course &#8212; which since 2005 has reserved a few slots for members of other branches of service &#8212; is a professional military education course designed to refine leadership traits, said academy staff. The course provides refresher instruction on such things as administration and warfighting.

Solomon volunteered for the course when he was unable to attend Air Force professional leadership training. He began the course at Camp Hansen hoping only to hold his own. &#8220;I was just trying to maintain, just trying to get a grip and not embarrass the Air Force,&#8221; he said.

But at the course&#8217;s end, his classmates voted Solomon the winner of the Gung Ho award, which academy instructors said each class presents to the individual whom class members felt showed the most teamwork and motivation.

Classmate Kreston Monroe, 29, a gunnery sergeant, said Solomon was not what he expected of an airman.

&#8220;My expectation was that he would be the one slacking off,&#8221; he said. But as the weeks passed, Monroe said, he instead found Solomon to be one of the motivators.

Which didn&#8217;t mean it all was a stroll on the beach. Solomon said the hardest part of the class was understanding Marine Corps acronyms.

The physical training also was a little more than he was used to in the Air Force. He had never done a pull-up before but now he can now do six to eight, he said.

Said Gunnery Sgt. Jeffrey Sundermier, chief instructor for the course: &#8220;He went the extra mile and really became involved with the Marines.&#8221;