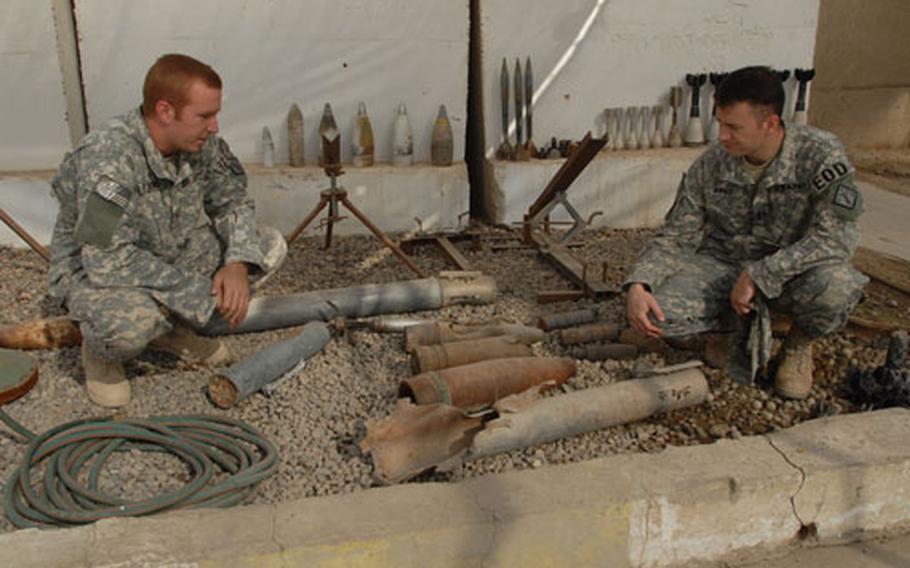 BAGHDAD &#8212; U.S. soldiers are reporting finding more and more roadside bombs packed with homemade explosives instead of artillery rounds, indicating that Iraqi insurgents may be be running out of military-grade ammunition.

&#8220;All the good stuff is gone or getting close to being gone,&#8221; said 2nd Squadron, 2nd Cavalry (Stryker) Regiment intelligence officer Capt. David Dehart, whose unit has secured a large swath of southern Baghdad since September.

&#8220;There are not these large 152 mm or 130 mm [artillery rounds] lying around anymore. No anti-tank mines have been found in our area. There are no [rocket-propelled grenades] these days.&#8221;

The homemade explosives are not nearly as effective, the 30-year-old Raleigh, N.C., native said. &#8220;That has led to a reduced ability for the enemy with IEDs,&#8221; he said.

Insurgents appeared to have a plentiful supply of military ordnance looted from unsecured Iraqi ammunition dumps and hidden in caches throughout the country. But according to 2nd Squadron commander Lt. Col. Myron Reineke, many of the artillery rounds recovered from caches by his unit in the last three months were corroded.

Dehart said caches discovered recently are smaller than those he saw on a previous tour two years ago in Mosul. That could be a sign that there isn&#8217;t as much ammunition available to insurgents, or that they&#8217;ve decided it&#8217;s better to split up their stash, he said.

Capt. David Ihrke, 32, who leads the 47th Explosive Ordnance Disposal Company out of Camp Falcon in southern Baghdad, said the caches his soldiers have seen recently are a mix of homemade explosives and conventional ordnance.

&#8220;Finding caches has definitely cut down on their supplies and cut the ability for the insurgents to bring in new ordnance. It may also be that it is more expensive for insurgents to buy conventional ordnance.&#8221;

&#8220;These days the Sunni tactic [in roadside bomb attacks] is some type of homemade explosive in a two-liter soda bottle disguised in a gas container,&#8221; Dehart said.

Ihrke says fertilizer is the main source of ingredients for the explosives in southern Baghdad, which includes a large area of farmland on the fringe of the city.

Making homemade explosives is dangerous because some are so sensitive that the slightest movement can set them off, Pitchford said. On the other hand, some poorly made explosives recovered by the 47th EOD will not explode, he said.

However, Ihrke warned that a skilled bomb-maker can make roadside bombs using homemade explosives that are just as deadly as those made with military-grade ordnance.

For example, the Army has found build-your-own explosively formed penetrator kits in southern Baghdad. The devices are able to kill soldiers inside some of the Army&#8217;s most heavily armored vehicles, he said.