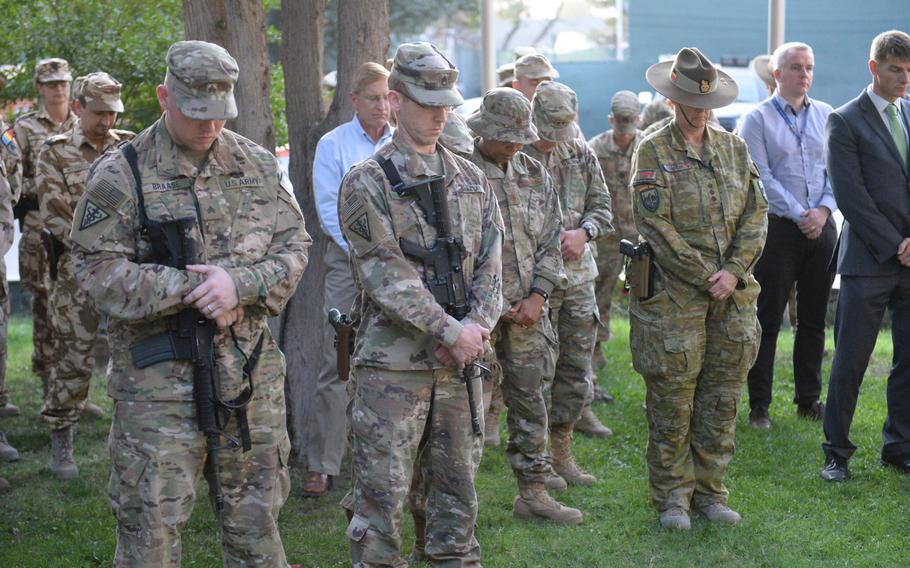 Coalition servicemembers and civilians at NATO's headquarters in Kabul attend a memorial on Monday, Sept. 11, 2017 for the 9/11 terrorist attacks. (Phillip Walter Wellman/Stars and Stripes)

Coalition servicemembers and civilians at NATO's headquarters in Kabul attend a memorial on Monday, Sept. 11, 2017 for the 9/11 terrorist attacks. (Phillip Walter Wellman/Stars and Stripes) U.S. servicemembers raise the American flag during a 9/11 memorial at NATO headquarters in Kabul, Afghanistan on Monday, Sept. 11, 2017. (Phillip Walter Wellman/Stars and Stripes) 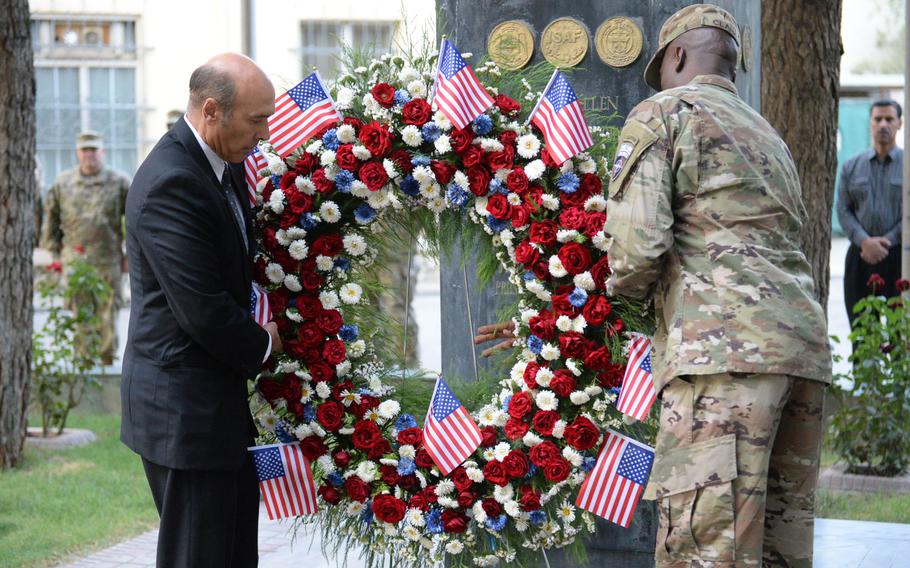 KABUL, Afghanistan — A Taliban suicide bomber blew himself up near the largest U.S. base in Afghanistan on Monday, a day on which servicemembers marked the anniversary of the 9/11 terrorist attacks.

The blast near Bagram Air Field, which officials said left two U.S. troops wounded, underscored the fragile security situation in the country 16 years after a U.S.-led invasion was launched in response to the Sept. 11, 2001 attacks.

The servicemembers’ injuries were not life-threatening, according to NATO. The alliance said several Afghan civilians were also wounded by the blast and that their conditions were not immediately known.

At a ceremony to mark the 2001 attacks at NATO’s headquarters in Kabul, Ambassador Hugo Llorens, the special charge d’affairs at the U.S. Embassy in Kabul, said the United States was committed to continuing its support for Afghanistan and would not be deterred by Monday’s blast or any violent acts by insurgents.

“We’re not at the point where we can say we’re finished and we’re out — that’s not going to work,” Llorens said.

“Today we remember how this conflict began, but let us also remember how this must end — with Afghanistan never again serving as an ungoverned space, sanctuary or base for those groups bent on attacking us and our allies.”

The U.S. invaded Afghanistan in 2001 to punish the Taliban, which had ruled the country since 1996 and provided shelter to al-Qaida leader Osama bin Laden, who orchestrated the 9/11 attacks. Nearly 3,000 people perished when hijacked aircraft were flown into the Pentagon and World Trade Center in New York.

Navy Chief Petty Officer Kent Frosch owned a computer consulting company at the time, but after seeing one of the aircraft hit the World Trade Center, he decided to join the military to “make something better.”

Now on his third deployment to Afghanistan, Frosch attended Monday’s ceremony in Kabul to pay respect to those who died, both in the 9/11 attacks and the ensuing war.

“It’s a chance for you to look back and say, ‘The past 16 years haven’t been in vain,’” Frosch said. “People have lost their lives, they’ve become martyrs, they’ve become heroes, and it’s a chance to think about those people, take a step away from what we’re doing and remember why we’re here.”

Despite the U.S. coalition’s success in helping to build the Afghan government and armed forces, the Taliban are now said to control more territory than at any time since the 2001 invasion.

Monday’s bombing near Bagram came just days after another Taliban insurgent, seeking revenge over a propaganda flyer distributed by U.S. forces that was deemed offensive to Muslims, blew himself up outside the base. It also followed a pledge by President Donald Trump last month to keep U.S. troops in Afghanistan indefinitely.

The move was criticized by some, who point to recent gains by the Taliban and say America’s efforts have been futile.

But others, like Capt. Jan Dunmurray of the Swedish Royal Navy, say U.S. and NATO assistance in Afghanistan is vital, not only for Afghans’ security but for the world’s security.

“This is very important ... it makes us all go back and realize why we’re here. We don’t want to have any terrorist sanctuaries anywhere in the world.”