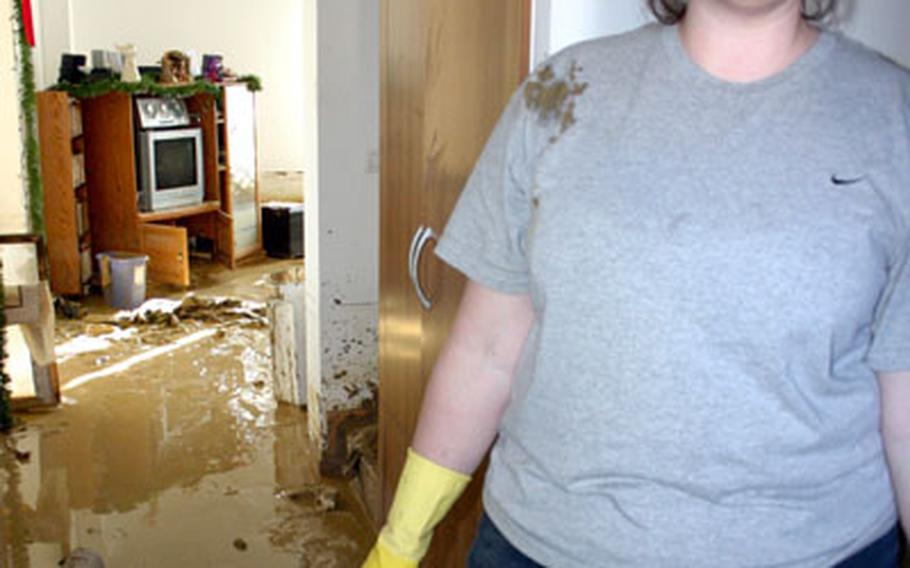 Jennifer Partridge takes a break from cleaning the silt out of her house at the Maranai military housing complex to talk to Rear Adm. Noel Preston, commander of Navy Region Europe, about last Wednesday&#39;s flooding. (Sandra Jontz / S&S)

Jennifer Partridge takes a break from cleaning the silt out of her house at the Maranai military housing complex to talk to Rear Adm. Noel Preston, commander of Navy Region Europe, about last Wednesday&#39;s flooding. (Sandra Jontz / S&S) NAVAL AIR STATION SIGONELLA, Sicily &#8212; It could have been worse.

Partridge was in Gulfport, Miss., when hurricane Katrina blew through this summer. Her friends returned to areas where their homes no longer exist.

So, she told the admiral, her clothes and shoes caked in the silt she and her husband were trying to swab up from their townhouse, &#8220;It could have been worse.&#8221;

What a difference a week and a lot of efforts make, said Preston, commander of Navy Region Europe. When he last visited Maranai, he did so in a Humvee equipped with a snorkel kit.

The base&#8217;s efforts to take care of its people and return to full operational status is nothing short of amazing, Preston said.

By Friday, officials hope to have about 80 of the minor-damaged houses available for occupation, base commander Capt. Joe Stuyvesant said.

Officials ambitiously are drafting personalized plans for each of the affected families, he said.

&#8220;The most important thing is to develop a plan for every person ... and find them a permanent living situation as soon as we can,&#8221; Stuyvesant said.

With the blessing of Navy leaders, he&#8217;s bending the rules to accommodate his sailors. For starters, Stuyvesant is suspending temporarily the minimum 98 percent base occupancy requirement and letting families decide if they want to live on base or on the economy.

Even those whose houses sustained little or no water damage will have the option to relocate. That means, for example, that those whose homes are classified as in the red zone &#8212; having received major water damage from a foot of flooding or more that covers electrical outlets and facing months of restoration &#8212; could move into a home vacated by a family who elected to live elsewhere, he said.

In addition, sailors who have six months or less can change their duty stations early if they have their next set of orders. Some have the option to use the &#8220;early return of dependents,&#8221; sending them back to the States within a year of PCSing.

By Tuesday, NAS II had restored about 90 percent of its operational capability, including opening the flight lines. A taxiway needs repair and mud still covers some aircraft parking ramps, Stuyvesant said.

About six months ago, base leaders began holding meetings to plan for disasters, Stuyvesant said.

Relief efforts included having various departments work to get home and work routines back to normal. The housing office still was deluged with efforts to help people get shelter, while public works worked to restore vital services of electricity and running water, and the Fleet and Family Support Center basically filled in the voids.

The Sigonella chapter of American Red Cross needs to restock its disaster services trailer, emptied as volunteers provide necessities to residents flooded out and evacuated from their homes at the Maranai military housing complex at Naval Air Station Sigonella II.