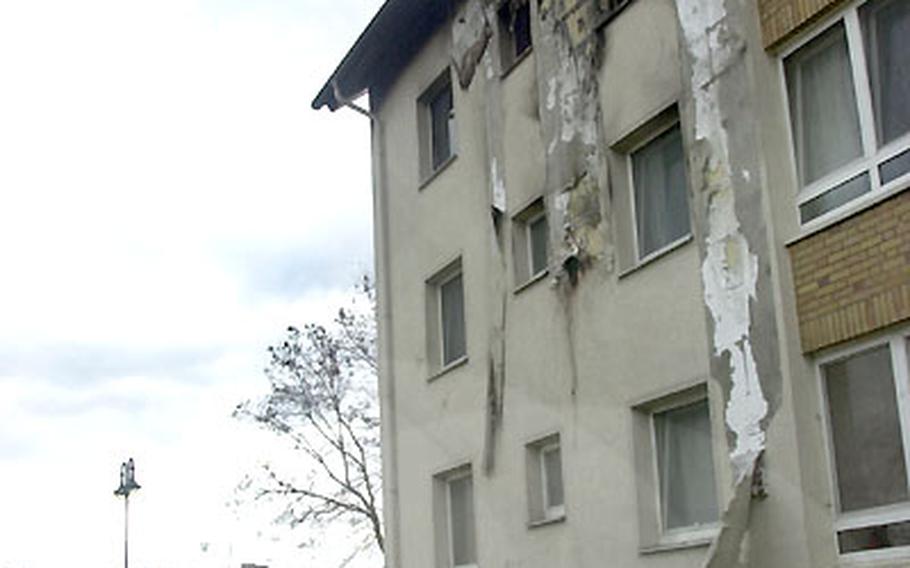 MANNHEIM, Germany &#8212; An Army enlisted family has lost everything after a fire ripped through its Mannheim government housing quarters Monday night.

Sgt. Michael John&#8217;s apartment caught fire at around 8:30 p.m., according the residents in building 685 in Benjamin Franklin Village.

A fire caused by electrical problems won&#8217;t surprise many of the building residents.

&#8220;The wiring here is terrible, said Kasey Rodriquez, who lives directly below the apartment that got gutted. &#8220;We&#8217;ve complained about this repeatedly, but nobody seems to listen.&#8221;

Rodriquez and her husband, a sergeant with the 512th Maintenance Company, say they have problems with flickering lights, faulty sockets and breakers constantly getting flipped.

The Taylors, in the apartment below them, say they&#8217;ve been having the same problems.

Until they get straight answers on what caused the fire, the Taylors say they&#8217;re sleeping in the living room, near the single exit out of their apartment.

And apparently the residents of building 685 aren&#8217;t the only ones who are worried.

Taking her baby out for a walk through the neighborhood Tuesday afternoon, Kimberly Craig stared at the damage from the sidewalk.

But Army officials say they have no record of complaints regarding electrical problems.

&#8220;The housing office or the contractor responsible for maintenance in the housing area have not received any work orders from the building &#8212; any building in that area &#8212; for electrical problems,&#8221; said Gebhard. &#8220;Sparks coming out of outlets would be a serious problem and become a priority work order,&#8221; he said.

She also noted that problems with wiring have never been raised during local town hall meetings.