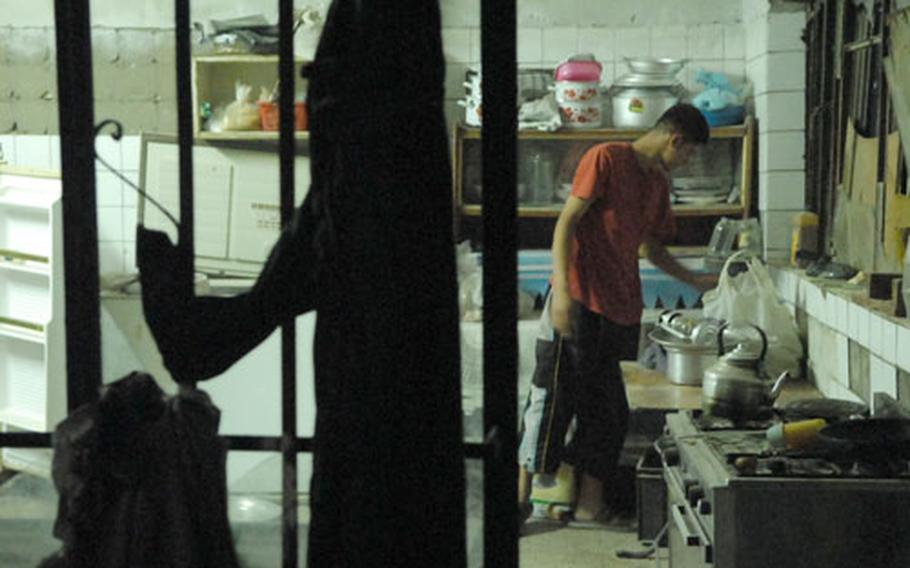 Broken windows give a clear view of Haider Hassan cleaning up debris from a bomb explosion that rocked his home in Baghdad’s Ghazaliya neighborhood. A man who was living in the home illegally is thought to have planted the bomb because he was mad Hassan’s family. (James Warden/S&S)

Ali Hassan Ali, a man in the home that was targeted, says the bomb was the width of his palm and a little bit longer than his hand. It was black and it was ticking.

Such bombs are usually only intended to scare the families moving back in, but this one did its share of damage. The explosion warped the metal on the bottom of the front gate and shattered all the glass in the kitchen. Haider Hassan, the son of one of the men in the home, cleaned the debris while U.S. soldiers collected information. Haider cut his finger on the broken glass.

It was the only blood the attacker drew.

Ali, Hassan and their relatives just moved back to Baghdad&#8217;s Ghazaliya neighborhood. The area has been getting safer for those who fled the area&#8217;s sectarian violence &#8212; especially Shiites in this Sunni-dominated neighborhood.

This Tuesday night, though, someone attacked the family. Soldiers from Troop A, 1st Squadron, 75th Cavalry Regiment tried to make sense of it.

The suspect used to live there illegally &#8212; a squatter. Neighbors saw his car in the area just before the explosion.

The man&#8217;s family lived next door to the damaged home, close enough for the husbands to trade barbecue tips in a more peaceful world.

The soldiers wandered over and found a home filled with wary women and children torn between their mothers&#8217; suspicion and their own curiosity. Young boys played with some soldiers while other soldiers interrogated the mothers.

The suspect was at another relative&#8217;s home, but the women confirmed that his car matched the one seen when the bomb exploded. They glared at 1st Lt. Mark Gerasimas, the platoon leader, when he asked for photos of the man.

The lieutenant was in no mood to play. He told the women to hand over a photo or his men would search for photos.

One young woman rushed to grab a photo album and eventually pointed to a wedding photo. Gerasimas softened and asked them for something different. It made him feel bad to take their wedding photos, he explained later.

When she found a suitable photo, the girl who fetched the album asked if she could cut her husband out of it so she could keep his part of the photo. The lieutenant agreed even though the interpreter warned him that it could be important.

Because of their alleged connection to the bombing, the Iraqi Army wanted the women out by 10 a.m. the next day.

The home, like the one next door, wouldn&#8217;t pass the most corrupt inspection in the states, but the women tearfully protested the decision to the Americans. They were just women and all their men were gone, they said. The house was Spartan; the women sat on mats instead of furniture. But they said there was no way they could pack up their few goods by the next day.

At last, he agreed to talk with the major on behalf of the women. He couched his opinion in layers of deference, explaining that he couldn&#8217;t tell the major what to do.

But beneath it all, the message was clear: He wouldn&#8217;t kick out the women and he&#8217;d like the major to talk to them himself if that was still his decision.

The major shrugged, and gave the women all of Wednesday to leave.

It was already after 9 p.m., but the platoon still had a busy night ahead.

Someone claiming to be "Mohammad&#8217;s Army" had left a threatening letter with a woman a few streets over.

The lieutenant eventually learned that many of the Shiites on that same street received similar letters.

Gerasimas had seen enough as it was. He looked at the mangled gate, the broken glass, and shook his head at the senselessness of all the violence.