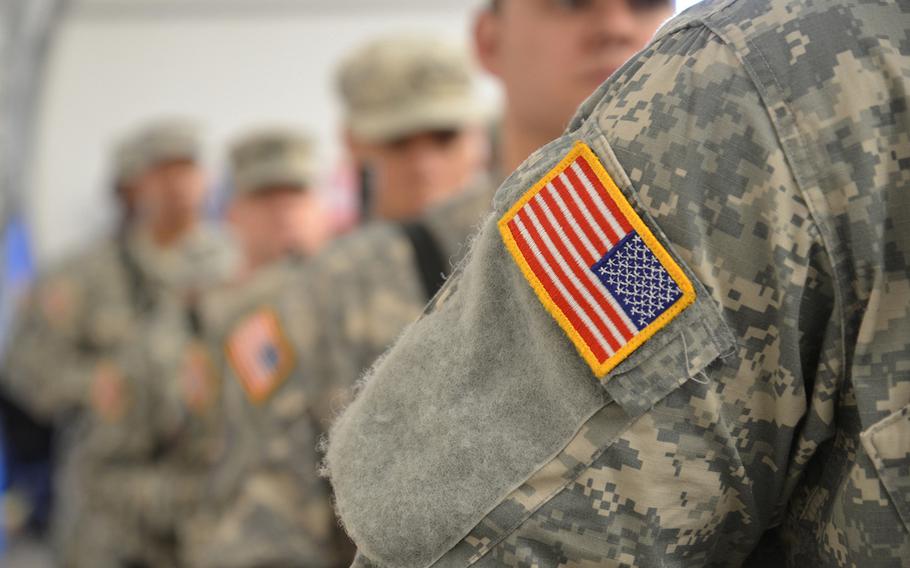 Soldiers stand in formation during a deployment ceremony for an Army Reserve battalion in 2016. The Army, after doling out housing allowances to a group of reservists deployed to Germany, said they were not entitled to the allowances. (U.S. Army)

STUTTGART, Germany — Army reservists deployed to Europe were wrongly denied housing allowance payments, subjected to humiliating criminal investigations and forced into debt by the service after the Army “willfully disregarded” its own policies to refuse benefits owed, according to a federal court complaint.

The complaint, filed last month in the U.S. Court of Federal Claims, accuses the Army of “gross negligence,” saying it caused financial and professional damage by intentionally denying benefits it should have paid.

The lawsuit also says the soldiers faced threats that “jeopardized their careers and security clearances by flagging them as subjects to fraud or larceny investigations.”

The dispute began in 2016 after reservist soldiers deployed to Europe and received benefits authorized by the Army, which included basic housing allowance, or BAH, for their stateside homes.

Full-time servicemembers normally receive either BAH or overseas housing allowance; however, when reservists mobilize overseas, they receive BAH because they cannot work the civilian jobs that pay their mortgages and rent. They also receive OHA when ordered by the Army to live off post, as the plaintiffs were in Germany because of a lack of available housing.

The benefit is spelled out in the Joint Federal Travel Regulations, which govern how allowances are paid: “A Service member called/ordered to active duty in support of a contingency operation is authorized primary residence-based BAH/OHA beginning on the first active duty day . . . This rate continues for the duration of the tour.” Army regulations reiterate the policy.

Months into their respective deployments, the finance office at U.S. Army Europe decided the benefits should no longer be paid, said Patrick Hughes, the Washington attorney representing the seven soldiers who filed the lawsuit.

The Army Reserve and National Guard officers, who were dispatched to Europe for contingency operations, are seeking to restore their benefits and abolish Army-imposed debts that have been levied.

Over the past two years, Hughes said, soldiers have seen entire paychecks wiped out through wage garnishments as the Army seeks to collect on debts that range from $13,000 to $94,000.

Hundreds of reservists could have been affected by the Army’s actions, Hughes said.

The court is expected to respond to the complaint within 30 days. If it’s accepted as the proper venue, the soldiers will move to certify the case as a class-action lawsuit that other reservists could join.

“You do need power in numbers to get action to be taken in these situations. We are trying to address it at a massive scale,” Hughes said. “This an effort to resolve the issue in its entirety for everyone.”

In some cases, soldiers were issued general officer reprimands, which are often considered career-killers.

Col. Bradley Wolfing, one of the plaintiffs in the case, successfully appealed his reprimand, which was the result of being “erroneously placed under investigation by the Army’s CID, and ultimately punished for BAH fraud on or about March 24, 2017,” the complaint says.

A grade determination review board determined Wolfing satisfactorily served as a colonel and was allowed to retire as such, the complaint states.

In conjunction with that ruling, Defense Financing and Accounting Services reviewed the case and “concluded that the Army’s decision to ignore (the Joint Federal Travel Regulation) and deny COL Wolfing his primary residence location BAH entitlement was erroneous.”

That conclusion will likely factor into any future litigation.

“This DFAS opinion is of great significance, because its analysis is applicable to virtually all of those affected by the Army’s primary residence location BAH entitlement denial,” the complaint says.

Still, the Army continues to garnish soldiers’ wages, a move the complaint says “amounts to gross negligence.” The Army indebted Wolfing for $94,000.

“Basically, I was criminally processed, all because they are saying I shouldn’t (have been) collecting BAH for my Connecticut residence. I was stunned,” said Capt. Tim Kibodeaux, an intelligence officer with 27 years in the National Guard.

Criminal Investigation Command agents fingerprinted him and took his mug shot for their records during the investigation.

The Army levied a $50,000 debt on Kibodeaux for BAH payments it says he wasn’t entitled to and has repeatedly garnished his wages, the soldiers’ complaint says. Meanwhile, he hasn’t received about $16,000 in owed benefits.

The six other servicemembers in the complaint are in similar situations.

“My credit has been completely ruined,” Kibodeaux said. “I am disgusted at this point. We think about 340 people were affected by this.”

At least 140 soldiers were snared in the BAH investigation in Europe, according to the complaint, which cites information relayed by the Criminal Investigation Command.

Given the high numbers of reservists who have been rotating through Europe in support of Operation Atlantic Resolve — the campaign to deter Russian aggression in the region — the lawsuit says that the numbers are likely much higher. If the complaint grows, millions of dollars could be at stake in future litigation.

One concern now, Kibodeaux said, is that lower-ranking reservists could have been intimidated into silence and may be unaware that their rights to certain benefits have been violated.

“Several Plaintiffs were informed through their chain-of-command that any future inquiries into this issue would be met with negative consequences, and that the denial of the housing entitlement was a final decision,” the complaint says.

Kibodeaux said he and his colleagues never received a clear explanation from the Army why benefits were taken away or why they were subjected to criminal investigations.

During the probe, Kibodeaux said, he told Army finance officials about the regulation that allowed for the allowance. He said the Army investigators told him they didn’t recognize the policy, which for decades has allowed reservists on deployment overseas to receive BAH for their home of record.

“They said, ‘We don’t go by that. We go by the active duty one,’” Kibodeaux said.

When Kibodeaux pointed out the military’s regulations governing allowances for reservists to a criminal investigator, the agent’s response was, “We just do what finance tells us to do,” Kibodeaux said.

In recent years, the military has struggled to interpret federal regulations dealing with living allowances.

In 2013, a reinterpretation of overarching State Department regulations by the Defense Department put nearly 700 civilians in debt by cutting off their housing allowances. Special waivers were required to eliminate debts that in some cases reached six figures.

Europe-based reservists have also been affected by new interpretations of long-standing regulations. In 2013, the Army decided to stop paying BAH to reservists who lived in Germany and deployed on Army missions in other parts of Germany that were hours away from their home.

The Army, which imposed debts on about 10 soldiers at the time, never fully explained its legal rationale for changing the rules.

Servicemembers and civilians who have gotten caught up in benefits disputes have complained that there is little internal recourse in a one-on-one fight with the military bureaucracy over benefits. And the idea of taking on the federal government in a lengthy court fight also is daunting and costly.