Reservists posted to Yongsan to help with holiday mail 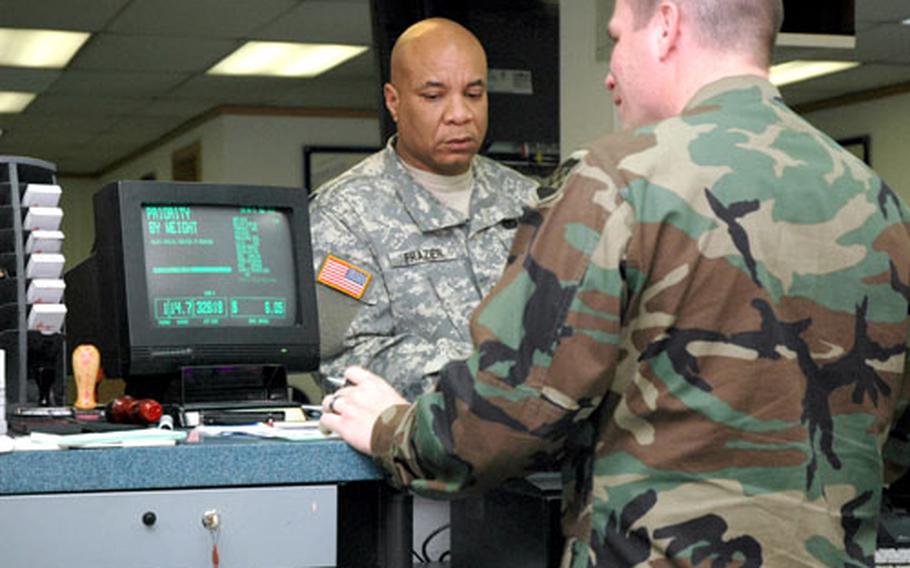 A soldier helps a customer Tuesday morning at the post office on Main Post, Yongsan Garrison. The 19th Adjutant General Company Postal is using Army reservists this holiday season to help process the mail. The company still expects long waits at the window, but the sorting and delivery behind the scenes is expected to go much quicker. (Teri Weaver / S&S)

YONGSAN GARRISON, South Korea &#8212; During the holidays, the amount of mail coming into Yongsan Garrison&#8217;s main post office can more than double.

To compete with the load of presents, holiday cards and last-minute shipping, the 19th Adjutant General Company Postal has its own surge of reservists coming over this season to help deliver the mail, according to Lt. Desiree Dirige, the company executive officer.

Normally, the post office holiday rush &#8212; both incoming and outgoing &#8212; starts about mid-November, she said. To combat that, three sets of about 40 reservists are coming to South Korea for two-week stints to help with customer service, processing, sorting and delivery, Dirige said.

The reservists are from all over the States and will help at post offices in areas I, II and III, said 2nd Lt. Todd Edwards, a member of the Illinois Reserve.

The rotations, however, probably won&#8217;t make a dent in the long lines at post offices throughout the peninsula, said 2nd Lt. Leslie Peebles, the company&#8217;s platoon leader for Area II.

That&#8217;s because the sheer number of customers almost always outweighs the number of available windows, no matter how many people are working, she said.

The best thing customers can do is come to the post office with packages already wrapped and labeled, and with the appropriate paperwork filled out, said Floyd Burwick, the postal officer at Yongsan.

People with more than 10 boxes can call their local post office and set up an appointment for service before 9 a.m., Dirige said.

Kunsan Air Base: Schedule information was not available late Wednesday.