Reservists fill in holes left by demands of war 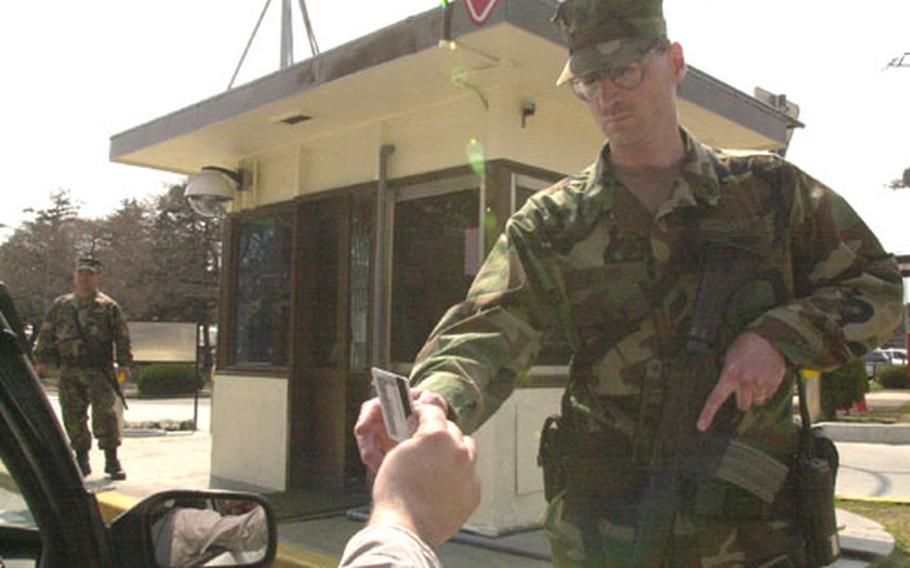 Electronic Technician&#39;s Mate 2nd Class Joe Elyard from Fleet Maintenance Unit 1803 in Evanburg, Pennsylvania, checks IDs at the gate of Atsugi Naval Air Facility. The activation of the reserve augmentees to the security forces is one of the ways reservists are contributing to forward bases during the deployment of several units to Persian Gulf. (Jim Schulz / S&S)

Navy Petty Officer 2nd Class Joseph Elyard left the Navy years ago. But after Sept. 11, 2001, the married father of three came back to the force, this time as a Navy reservist.

Patriotism brought him back to military service, and patriotism helps him now, during a yearlong activation that has him meeting security needs at Atsugi Naval Air Facility in Japan, far from his family and home in the United States.

Reservists guard ships, fly planes and assist medics. And many of them do this while absorbing a sizeable pay cut. Without them, U.S. officials say, the armed forces would not be prepared to wage war or protect the nation&#8217;s interests.

After the first Gulf War and during the 1990s, reserves had a 400 percent increase in operations tempo, according to the Reserve Forces Policy Board.

They were sorely needed, military officials say. After 9/11, for instance, security patrols at bases everywhere mushroomed. &#8220;We couldn&#8217;t have done it without them,&#8221; said Senior Chief Petty Officer Mark McCready, assistant security officer at Atsugi. &#8220;It&#8217;s a tough job for these guys.&#8221; Reservists sometimes make up half of a watch, he said.

Since Sept. 11, McCready has worked with a lot of reservists: the FBI trainer who joined the Reserve with no prior experience. He was an E-3. Then there were the state highway patrolman, SWAT team member and traffic accident investigator.

These reservists brought new skills to the security force, such as how to detect drunken drivers and investigate accidents.

Reservists also can show troops how military skills work in the civilian world. Petty Officer First Class Don Sabol, for example, was a gas turbine mechanic for the Navy. He now operates a power plant using skills he learned in the Navy.

Many reservists were former active-duty servicemembers and have years of training and experience to offer.

&#8220;The amount of training they have accumulated is extraordinary in many cases &#8212; sometimes to the surprise of active-duty soldiers,&#8221; Campfield said.

Reserve activations now last up to a year. The president can double that period by special order, or a reservist can extend his or her service to two years.

While activated, a reservist is paid the same as an active-duty servicemember. For Sabol, that equates to a $30,000-per-year pay cut.

Elyard said he, too, &#8220;took a substantial pay cut, but I knew that it could happen and planned for it. Duty to country transcends financial gain.&#8221;

At home in Pennsylvania, Elyard &#8212; a former submarine electronics technician for the Navy &#8212; worked for a federal prison. A co-worker agreed to fill in for Elyard while he&#8217;s activated, and their employer split up the co-worker&#8217;s duties, Elyard said.

He and his wife planned for the income loss. His wife is a nurse with an income for them to fall back on and both their families live close enough to help with baby-sitting and fixing a meal or two.

Schrader and his family manage by taking advantage of the Soldiers and Sailors Relief Act, which requires creditors to drop interest rates. They also had good timing &#8212; they&#8217;d just paid off one car and were able to sell the second when Schrader was activated.

When Schrader learned he was activated, he took care of the immediate concerns, such as preparing a will and power of attorney. The rest, he left behind. &#8220;A lot of it fell on my wife,&#8221; he said.

She sold the second car and wrote to the creditors to get reduced interest rates. To make time in the evening to care for the children, she quit the hand-bell choir at church. &#8220;She had to give that up. It was at night,&#8221; Schrader said.

Unlike spouses of active-duty servicemembers, wives and husbands left behind often live far from the support structure of a base community.

&#8220;Spouses of activated reservists have more burdens on them than the reservists,&#8221; Elyard said.

During the year apart, birthdays and anniversaries are missed, projects remain unfinished, relationships with children are strained.

But, he added, the year away will give Schrader a new appreciation for family. No more working late and missing dinners and bedtimes, he said: &#8220;Now I don&#8217;t see myself doing that when I get back.&#8221;