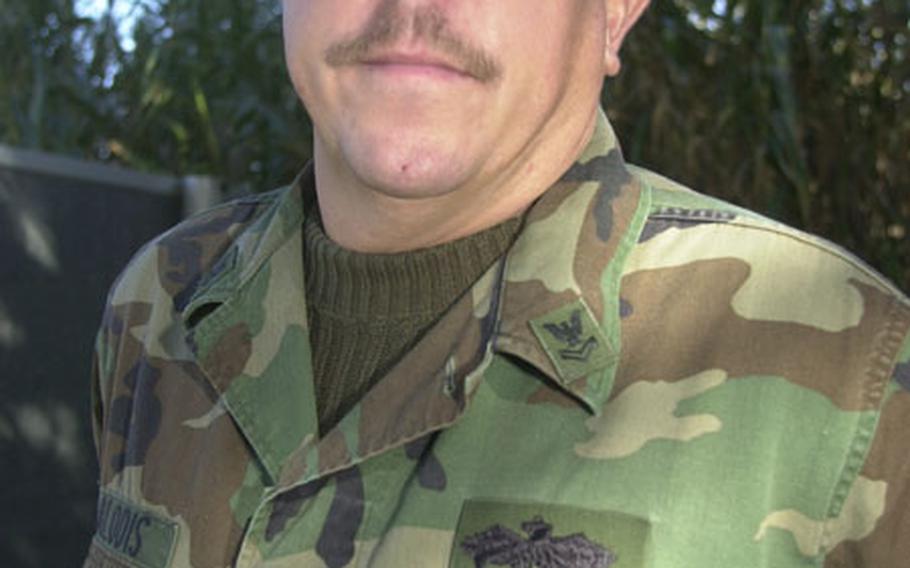 But those aspirations were crushed when automotive parts retail giant Pep Boys fired him in June 2002 after he returned from Navy Reserve training.

Company executives contend they laid him off because of poor performance. But Balodis claims the retail chain sacked him because of his military service. He is suing the company for $5 million in lost wages and punitive damages, but hopes the lawsuit will help others.

&#8220;If nothing else, it&#8217;s going to send a tremendous lesson to the work force and also mostly to Pep Boys to save maybe more people that this might have been happening to,&#8221; said Balodis, who is in southern Spain for annual Reserve training.

His case has attracted some headlines and put greater attention on worker rights as the military leans heavily on reservists and Guardsmen to help fight the war on terrorism and rebuild Iraq. The battle also has spawned concerns that companies might penalize some of the tens of thousands of part-time soldiers when they return to their full-time jobs.

The lawsuit alleges that Pep Boys fired Balodis because his Reserve duties kept him from his job as a district manager in Tucson, Ariz., adding that the retail chain pressured him to choose between his military service and work.

Hours after the Sept. 11, 2001, terror attacks, the company reportedly sent a letter to the Navy requesting that Balodis not be called up because he was too important. When Balodis returned from a Navy exercise on June 27, 2002, the company fired him for &#8220;job abandonment.&#8221;

Furtkevic said that the American Legion awarded the company for its support of the military and that more than 25 reservist employees were deployed.

&#8220;The whole allegation is just appalling to my organization,&#8221; he said. &#8220;The founders of my company were World War I buddies who pulled together their money to start this company. The president of our company is retired U.S. Army. The CEO of our company was a Canadian military paratrooper. The fact that someone would believe we would terminate an employee because of their military obligation is preposterous.&#8221;

The company fired Balodis, Furtkevic said, for insubordination, not his frequent military duties.

He noted several memos, including one in February 2002 in which Balodis was demoted to store manager. Another mentioned that Balodis tried to implement a pay raise for an employee and a bonus for another without approval.

Balodis, however, disputes any suggestion that he did a poor job.

Thousands of Reserve and Guard members are scheduled to complete their deployments and return to their jobs as teachers, police officers and salesmen. By law, they must return to a job of the same pay and grade. Time spent on deployment should be counted toward pensions and step raises. In short, they should be treated as though they had never left.

The Employer Support of the Guard and Reserve helps educate employees and employers about the rules and mediates disputes between Reserve and Guard members and their bosses.

The Defense Department agency receives about 400 calls a week, or about 20,000 calls each year, said Col. Thomas Hart, an Air Force reservist who is the director of operations.

Hart estimates that about 10 percent of those calls involve conflicts between employers and employees.

The agency&#8217;s 4,200 volunteers across the country help resolve about 95 percent of the employee-employer disputes. But those that can&#8217;t be worked out are handed over to the U.S. Department of Labor. A small percentage are decided in court.

With the most reservists deployed since the 1991 Persian Gulf War, there are concerns that the number of conflicts will rise.

Returning to a job at lesser pay or receiving a demotion can be devastating, especially after returning from a deployment.

Balodis said his termination ruined him financially and tore apart his family. He had to go on unemployment until he found another job working at a department store for slightly more than half the $90,000 in salary and benefits he earned at Pep Boys.

Last year, his family of four had to sell their four-bedroom home and declare bankruptcy. The ordeal also took its toll on his marriage. Last September, he and his wife divorced. He blames the stress created over the firing led to the problems.

Things are better now. He has a new girlfriend and hopes to remain on active duty with a Navy construction battalion.

A U.S. District court judge ruled last year that Balodis must arbitrate his claim instead of going to court. Depositions are scheduled for June. Regardless of the outcome, however, Balodis said that he has grown from the experience.