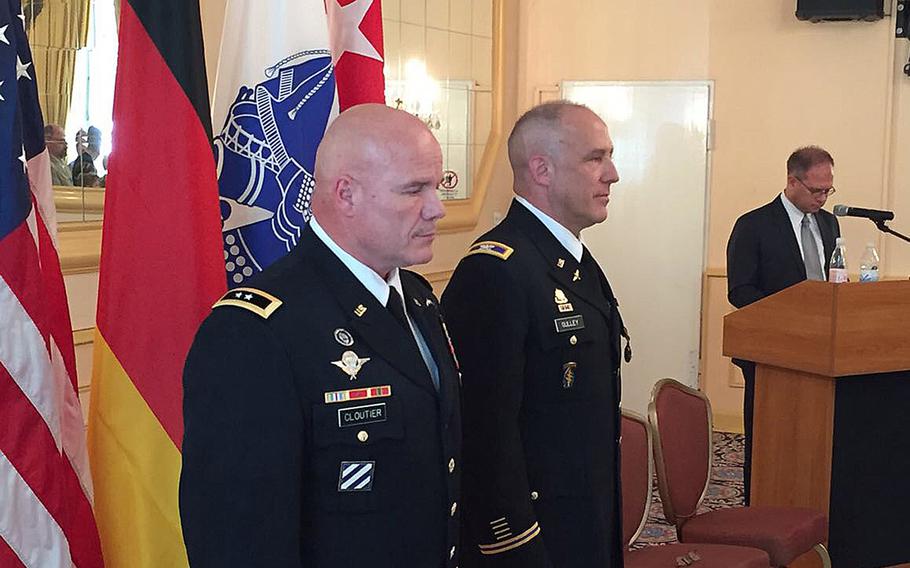 Col. Richard Gulley stands with Maj. Gen. Roger Cloutier, at the time U.S. Africa Command's chief of staff, during the colonel's June 2017 retirement ceremony in Stuttgart. Gulley is suing the service for refusing to provide internal records that he says could help clear his name, which he said was tarnished after being subjected to a criminal investigation over housing allowance payments. (Courtesy Richard Gulley)

STUTTGART, Germany — A retired U.S. Army colonel is suing the service for refusing to provide records that he said could help clear his name, which was tarnished after he endured a criminal investigation over housing allowance payments.

The complaint is the latest twist in a broader battle by a group of Army reservists who say the service wrongly subjected them to criminal probes after they lawfully received dual housing allowances — one for their homes of record and one for off-base housing they were ordered to live in while on assignment in Europe.

For several years, reservists deployed to Europe on unaccompanied tours received both allowances to make up for not being able to work in civilian jobs that pay their rents and mortgages.

The dual allowance payments ended abruptly about three years ago as scores of soldiers were snared in investigations and were accused of fraudulently receiving payments.

It remains unclear why the policy changed or who authorized it.

Richard Gulley, a former deputy chief of staff at U.S. Africa Command who retired from the Army Reserve in 2017, said his life continues to be disrupted over past accusations of fraud. 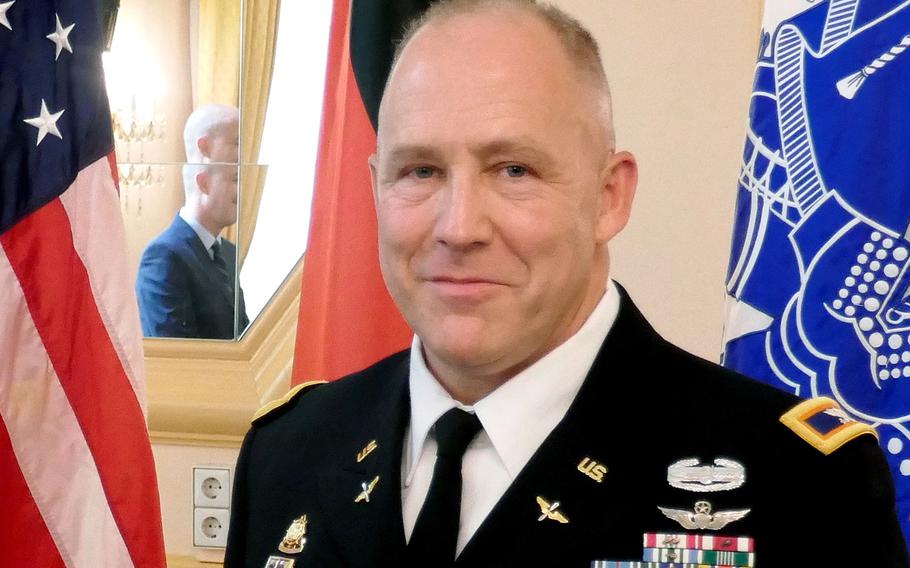 U. S. Army Col. Richard Gulley during his retirement ceremony in Stuttgart in June 2017. Gulley is suing the service for refusing to provide internal records that he says could help clear his name, which he said was tarnished after being subjected to a criminal investigation over housing allowance payments. (Courtesy Richard Gulley)

“I have been retired almost two years and it still affects me every day,” said Gulley, who was ordered by the Army to pay back more than $100,000 in past housing payments.

Gulley has filed a complaint against the Army, which he said has refused to comply with a Freedom of Information Act request he submitted in June 2018 for documents connected to several Inspector General probes.

The investigations cleared him of wrongdoing in connection with the housing allowance matter, he said.

Gulley, a commercial airline pilot, was charged with fraud and larceny by the Army just before his 2017 retirement but never was prosecuted. Then in 2018, unbeknownst to him, he said, an additional charge alleging obstruction was added to his file by the Army’s Criminal Investigation Command in connection with the housing probe, even though he was already out of the military.

While Army investigators never informed him directly of the added charge, he faces questioning over the issue every time he passes through customs as part of his job as a pilot. “It doesn’t look good, to say the least,” Gulley said.

In a May 2 complaint filed in U.S. District Court in Washington, Gulley seeks a court order to force the Army to release the IG documents.

Nearly one year after his request, the Army has failed to provide the records, which violates FOIA regulations, the complaint states.

The Army did not immediately respond to a request for comment.

In August, Cavoli issued a letter to the Army’s personnel office that said federal law on reservist housing benefits “seems to entitle these Soldiers to both a basic allowance for housing at home station and an overseas housing allowance in USAREUR if housing is not available during their tour.”

Cavoli asked the Army to review the regulations, and that if inconsistencies are found, to modify them to allow reservists without dependents to “receive both housing allowances if required to reside off post,” stated the letter, which was obtained by Stars and Stripes.

Meanwhile, a separate federal complaint filed by a group of Army reservists deployed to Europe continues to work its way through the legal system.

Filed in April 2018, the complaint alleges they were wrongly denied housing allowance payments, were subjected to humiliating criminal investigations and were forced into debt by the service after the Army “willfully disregarded” its own policies by refusing them benefits owed.

A full-time servicemember normally receives either a stateside basic allowance for housing or an overseas housing allowance; when reservists were ordered to live off post in Europe, they received both allowances.

The benefits are spelled out in the Joint Federal Travel Regulations: “A Service member called/ordered to active duty in support of a contingency operation is authorized primary residence-based BAH/OHA beginning on the first active duty day ... This rate continues for the duration of the tour.” Army regulations reiterate the policy.

The reservists’ complaint, filed in U.S. Court of Federal Claims, accused the Army of “gross negligence,” saying it caused financial and professional damage by intentionally denying benefits it should have paid. The Army has sought to have the case dismissed.

“All filings are in and we are waiting on the judge’s decision with respect to the Army’s motion to dismiss,” said Patrick Hughes of the Washington-based Patriots Law Group, which represents the reservists. The Army has claimed the court where the suit was filed lacks jurisdiction, he said.

At least 140 reserve soldiers — and possibly as many as 350 — were caught up in investigations during the past couple of years in Europe, the federal complaint says.

The Army repeatedly has declined to comment on the matter, citing the pending litigation.