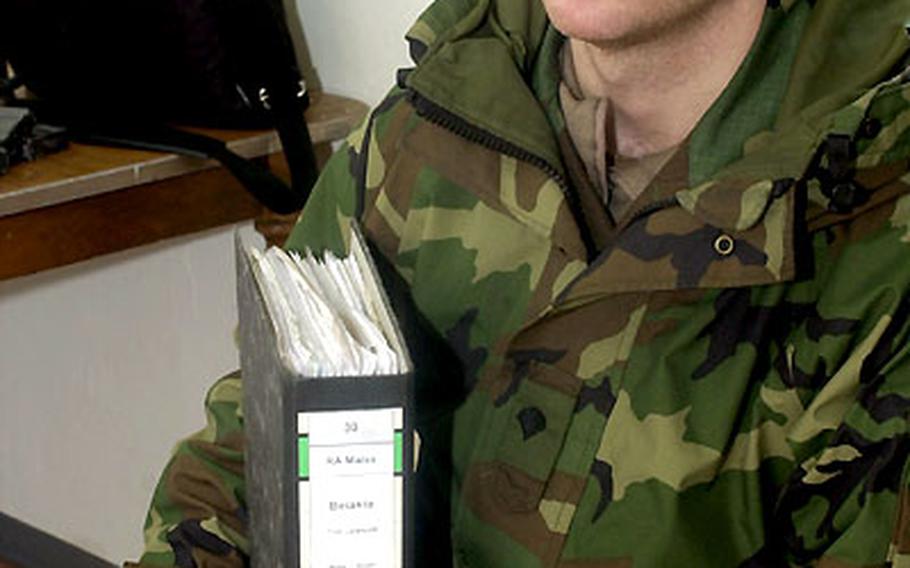 In the 16 months since he was assaulted, Tim Milke, now an E-5 in the Reserves, has collected a large binder of information in an effort to bring Pfc. James Butler Smith back into the Army. Milke says Smith assaulted him and wants Smith to face charges and pay some of Milke’s medical bills from the broken leg he suffered. (Terry Boyd / S&S)

KITZINGEN, Germany &#8212; When Tim Milke was attacked on his way home after a night out with a friend, it looked like an open-and-shut case.

Not only did German border police report they witnessed Pfc. James Butler Smith beating Milke unconscious &#8212; breaking his leg in the process &#8212; they also apprehended Smith midattack and arrested him.

Sixteen months later, Smith, 23, is out of the Army and in the United States, never charged in the beating.

Smith avoided jail because no one believed Milke, and, Milke said, no one cared.

Milke is left trying to figure out how to pay $30,000 in medical bills related to the beating while he waits to deploy as an intelligence analyst for the 313th Rear Operations Center, a Reserve unit currently assigned to the 1st Infantry Division.

But Milke is adamant there is no gray area in his story. Sitting at Campbell Barracks in Kitzingen, Milke holds a binder six inches thick with documents related to the attack.

What happened to him on Dec. 1, 2001, Milke says, was not just another case of two drunken soldiers in a punch-out. Milke, a reservist, wasn&#8217;t even a soldier at the time.

He left the Army with an honorable discharge on Sept. 1, 2001. Choosing to stay in Germany instead of returning to the States, Milke had just found out his boss at the time, Jason Benson, was promoting him to become the supervisor for crews delivering furniture from the Mannheim Furniture sales.

It was a cause for celebration, so the two went out. But the celebration ended in a brutal attack that lasted less than 30 seconds, and dashed Milke&#8217;s hopes, he said.

At about 3 a.m. Milke and Benson were walking to Benson&#8217;s car when they noticed four American soldiers walking toward them, screaming while dragging a fifth soldier.

Benson corroborates Milke&#8217;s account of the attack. &#8220;The guy threw a bottle at Tim, but we just walked away,&#8221; Benson said in a phone interview from Mannheim.

A few seconds later, someone grabbed Milke from behind, picked him up and slammed him to the ground, according to four German border police assigned to the Mannheim train station.

German police arrested Pfc. James Butler Smith, then 21, and a truck driver with the 11th Transportation Company at Mannheim.

In and out of four surgeries over the next 10 days, Milke assumed that Smith was under arrest, &#8220;that I&#8217;d come in and say my piece. But no one came.&#8221; German border police had turned Smith over to military police.

The Mannheim MP report records Smith&#8217;s blood alcohol content as .139. In most states, people with levels of more than .08 percent are considered intoxicated.

Smith told investigators that he&#8217;d had at least 13 beers that night.

Since May 2000, the Army has charged Smith with a number of offenses including assault and battery, disobeying orders, insulting a noncommissioned officer and damaging government property, according to Army documents.

But instead of prosecuting Smith in the Milke attack, they allowed him to separate from the Army.

Army investigators didn&#8217;t interview Milke until seven days after the attack and one day before Smith left Germany.

Financially, the injuries could not have come at a worse time. If he&#8217;d been a German civilian instead of an American, he&#8217;d be entitled to restitution under the Status of Forces Agreement, with the money garnished from Smith&#8217;s wages. But as a nonmilitary civilian, Milke was in insurance limbo. Because it had been three months since he separated, Milke&#8217;s 90-day postseparation insurance expired the day of the beating while his civilian insurance didn&#8217;t kick in until Dec. 31, 2001.

Since the attack, he estimates he has racked up $30,000 in medical fees including the surgery, and a year of therapy to walk correctly again. Milke has hired a Germany attorney in hopes of finding Smith and getting restitution.

But after 16 months, he seems to have come to terms with the fact that Smith may never serve a day, and that he may never receive any compensation for his injuries.

What Milke said he can&#8217;t let go of is the thought of Smith free out there, attacking someone else. And ruining another life.