Reservist's request ballooned into truckloads of goodies for troops in Iraq 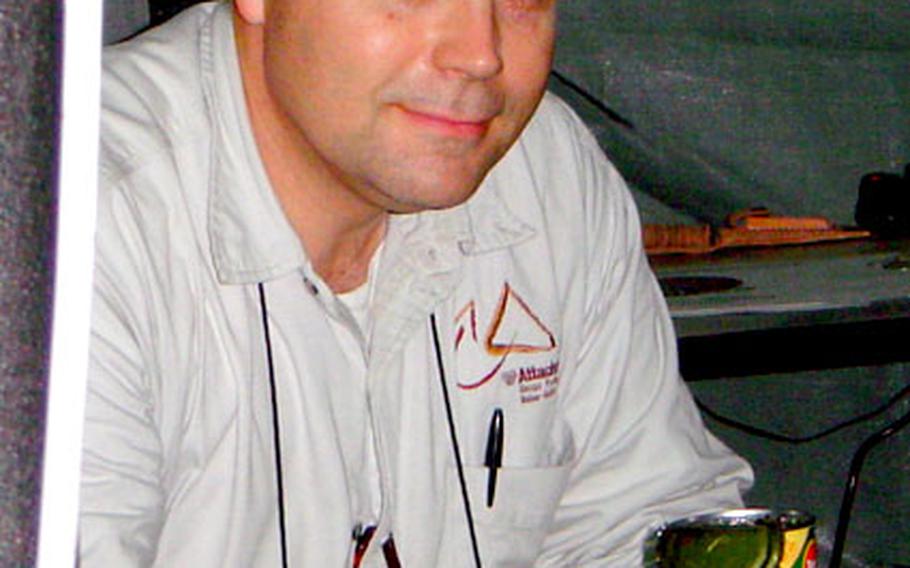 Mark Jeffery, a former Army Reserves captain now working as a civilian computer and communications specialist in Iraq, persuaded his wife to send all manner of recreational equipment to the troops. (Photo courtesy of Jenny Jeffery)

First he wanted dog flea collars to wind around his boots to ward off sand flies and scorpions. His wife sent them.

Then Mark Jeffery, a 43-year-old former Army Reserves captain working in north Tikrit, Iraq, upped the ante. Having survived not only scorpions, any allergic reaction from the flea collars (the Department of Defense says they&#8217;re a health hazard) &#8212; not to mention hostile fire &#8212; Jeffery asked his wife for some fun stuff.

How about some games, balls, bats and popcorn, he said, for him and his buddies, such as the 4th Infantry.

It&#8217;s apparently well placed. His wife is sending it all.

Earlier this week, Jenny Jeffery said she and a lot of helpers had collected tons of stuff that soon &#8212; perhaps in a week &#8212; would be on its way from storage areas near Cincinnati to Camp Speicher, Iraq.

Called &#8220;Operation Remember Me,&#8221; the effort is one of numerous grass-roots charitable works for U.S. servicemembers. Among other recent efforts are Operation Comix Relief, which sent comics to soldiers in Afghanistan; Operation Playmate, which allows soldiers to e-mail Playboy models; the self-explanatory Operation Air Conditioner; and the mysterious Operation Underwear.

Jenny Jeffery&#8217;s work even impressed her husband, a computer expert working for an information technology company that contracts with the Army.

&#8220;At the time it started, no one knew there&#8217;d be so much,&#8221; Mark Jeffery said in a satellite phone call from Camp Speicher, named for the Navy pilot shot down in the early hours of the first Gulf War and now listed as missing in action.

The campaign really took off after a Cincinnati radio station contacted by the Jefferys&#8217; daughter, Erin, a Miss Ohio hopeful, started airing information about the plan.

The Jefferys&#8217; phone started ringing off the hook and everybody, it seemed, from local schools and churches to electronic stores and sporting good outlets, to shipping companies and forklift operators, wanted to donate something. One woman also working on the project is allowed by her boss to do so at work, on the clock, Jenny Jeffery said, and the boss even provided business cards for everyone.

Maj. Gordon Tate, a public affairs officer at Forward Operating Base Ironhorse, about 20 minutes from Camp Speicher, said in an e-mail that the soldiers, working up to 15-hour days in harsh, dangerous conditions, are appreciative when any stuff from home comes their way.

Although this wasn&#8217;t exactly her idea, Jenny Jeffery said it&#8217;s been wonderful work.