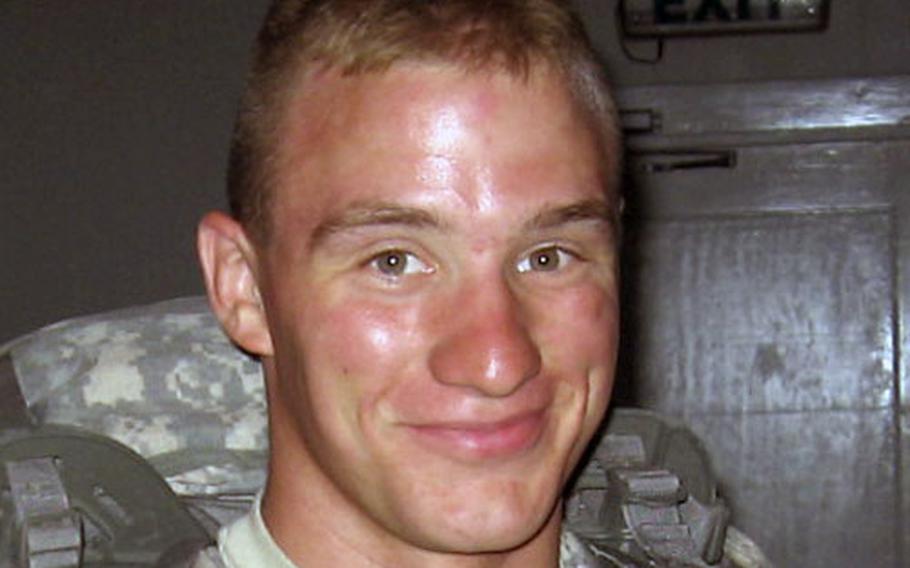 Spc. Benjamin Slaven, a reservist from Beatrice, Neb., was killed June 9 near Diwaniyah when a roadside bomb ripped through his convoy, killing him on the scene. (U.S. Army)

LOGISTICAL SUPPORT AREA ADDER, Iraq &#8212; To the men and women who worked with him, Spc. Benjamin Slaven was Superman.

And not only because the 22-year-old gunner had the Man of Steel&#8217;s logo tattooed on his well-muscled shoulder.

For the soldiers of the 7th Transportation Battalion, a unit attached to the 1st Brigade Combat Team, 34th Infantry Division of the Minnesota Army National Guard, Slaven was a faithful friend, a brave and dedicated colleague and, in the words of one of his closest friends, &#8220;the younger brother you never had.&#8221;

Slaven, a reservist from Beatrice, Neb., was killed June 9 near Diwaniyah when a roadside bomb ripped through his evening convoy, killing him on the scene.

He was posthumously promoted to specialist and awarded the Bronze Star, the Purple Heart and the Combat Action Badge.

A week after his death, soldiers from his unit, the 2nd Platoon, 308th Transportation Company, continued to grapple with his death, the first in the brigade&#8217;s three-month tenure in Iraq.

Soldiers who knew Slaven painted a picture of a young, determined soldier who always had a smile on his face, who collected pocket knives and liked scuba diving and motorcycles, who embellished his gym-toned body with tattoos and who worked ceaselessly towards his goal of one day becoming a drill sergeant.

&#8220;When I got the phone call, my first reaction when they told me was almost like getting punched in the chest. It was a tough thing,&#8221; said battalion commander Lt. Col. Allen Kiefer, blinking away tears. Slaven&#8217;s squad leader, Staff Sgt. Charles Johnson, said the squad will never be the same.

He said he and Slaven planned to take leave together and, upon their return to the United States, embark on a motorcycle trip to the Vietnam War memorial.

Slaven&#8217;s death is a particularly hard for soldiers like Spc. Shanna Rice, 28, who lived seven blocks from him in Beatrice, Neb.

The two, who met at the Nebraska State Fair last year, spent many evenings bowling, going to clubs in Lincoln and commiserating about his lack of a girlfriend.

Once, she said, as she was recovering from surgery, he visited her bedside, leaving a rose at the foot of her bed.