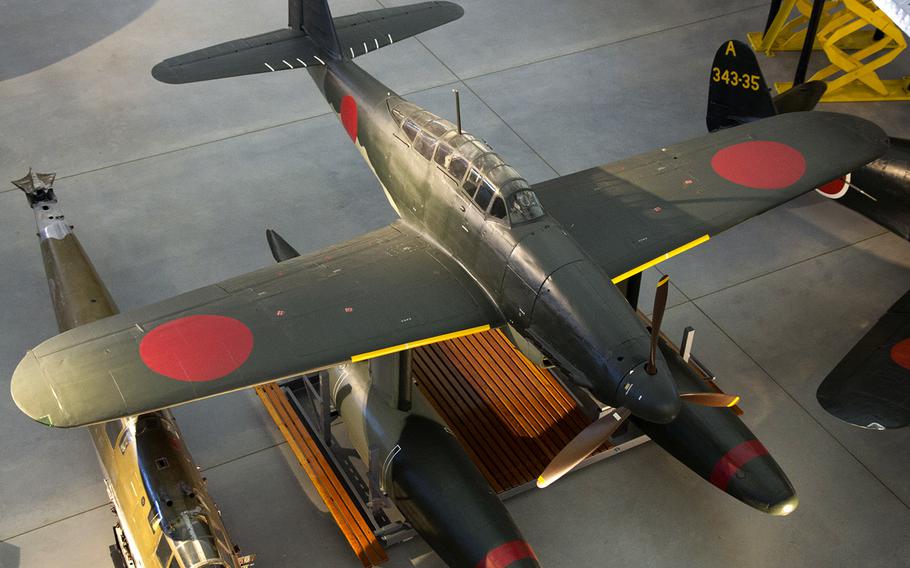 Buy Photo
The only surviving M6A1 Seiran torpedo-bomber, on display at the Smithsonian's Udvar-Hazy Center in Virginia. The I-400 reportedly carried three of the aircraft. (Joe Gromelski/Stars and Stripes)

Buy Photo
The only surviving M6A1 Seiran torpedo-bomber, on display at the Smithsonian's Udvar-Hazy Center in Virginia. The I-400 reportedly carried three of the aircraft. (Joe Gromelski/Stars and Stripes) U.S. Navy sailors watch the I-400 roll past in Japanese waters at the end of World War II. (U.S. Navy) 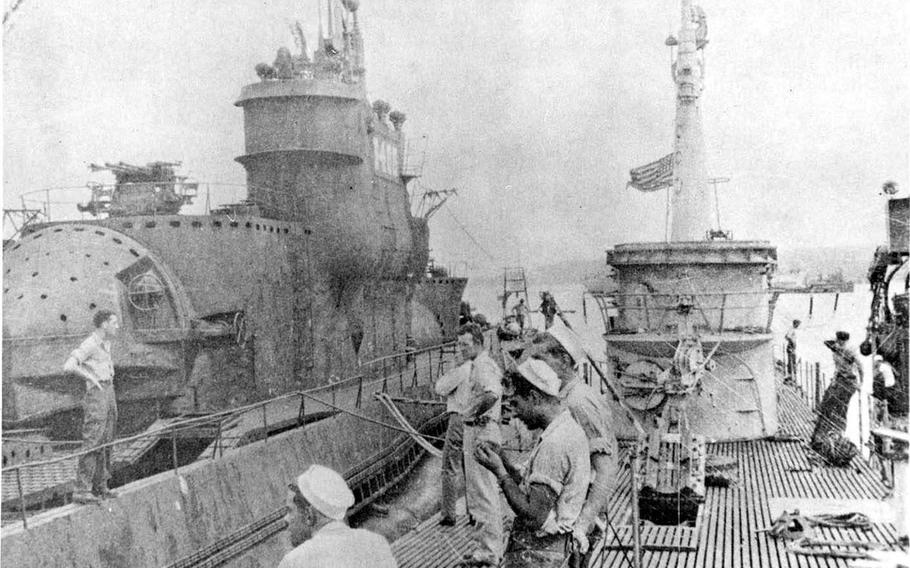 The USS Blower, right, in Tokyo Bay next to captured Japanese submarine I-400, circa September 1945. (U.S. Navy) The I-400's deck gun comes into view of the Pisces V submersible in August 2013 off the coast of Oahu. (Courtesy NOAA HURL archives) 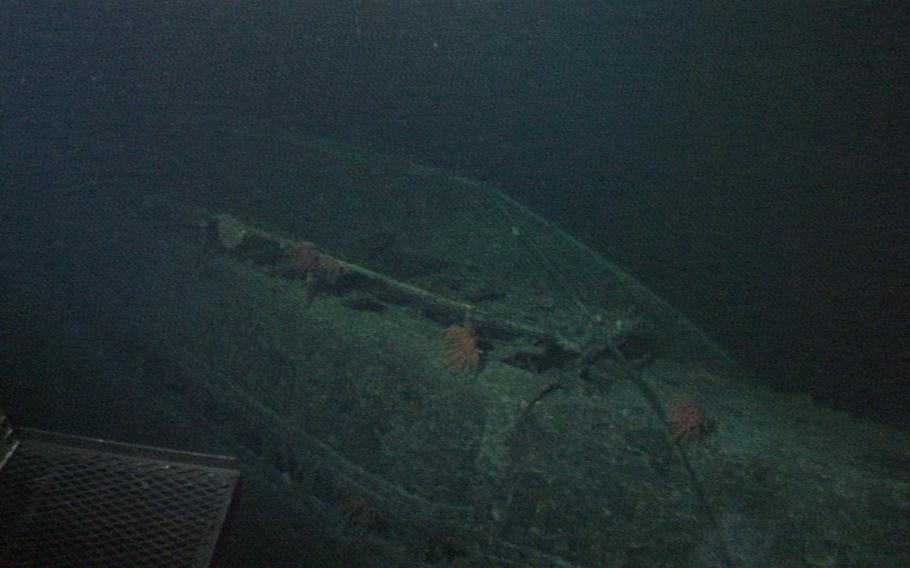 The hulking hull of the I-400 comes into view from the depths. When it was completed in 1944, the submarine was the largest ever built at 400-feet long with a surface displacement of 3,530 tons - a record that stood until the nuclear-powered subs of the 1960s. The submarine had a range of 37,500 miles and was able to travel around the world one and a half times before it needed refueling, something that remains unmatched to this day by any other diesel-electric submarine. (Courtesy NOAA HURL archives) After finding an anomaly in maps of the ocean floor, the Hawaii Undersea Research Laboratory's Pisces V deep-diving manned submersible was sent to investigate. On Aug. 1, 2013, it located the I-400, a relic from World War II. (Courtesy NOAA HURL archives) 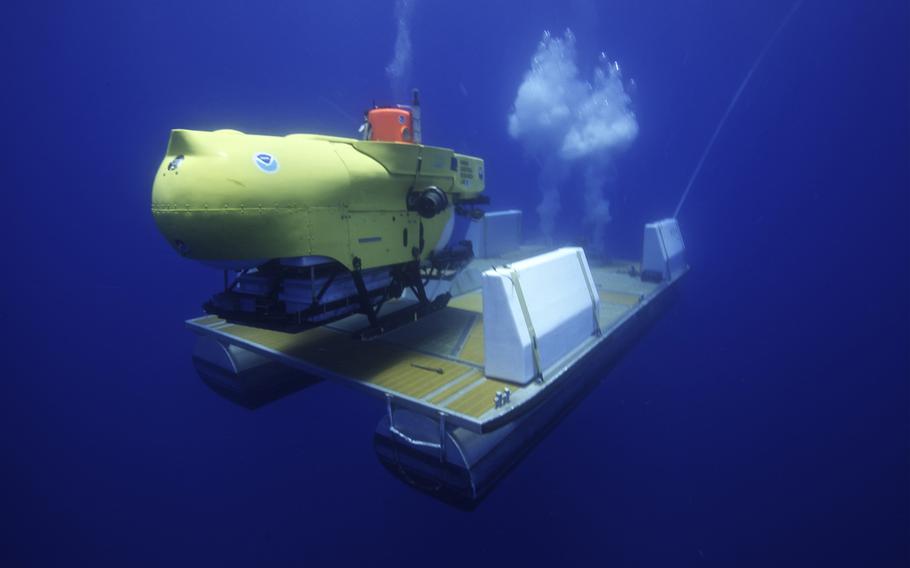 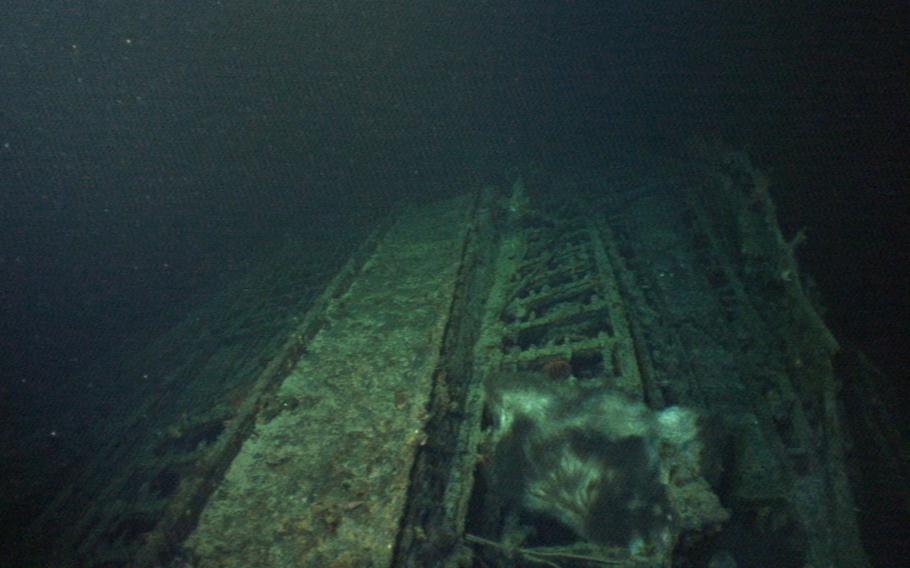 The I-400 rests at 2,300-feet off the southwest coast of Oahu. (Courtesy NOAA HURL archives) The I-400 rests at 2,300 feet off the southwest coast of Oahu. (Courtesy NOAA HURL archives)

SASEBO NAVAL BASE, Japan — During World War II, Imperial Japan’s massive I-400 submarine was shrouded in the highest levels of secrecy.

For the next 68 years, 2,300 feet of ocean darkness concealed the world’s first sub capable of launching an offensive strike on mainland targets.

But earlier this year, the twisted 400-foot colossus was discovered resting peacefully on the ocean floor off the southwest coast of Oahu.

The groundbreaking submarine — scuttled by the U.S. Navy after the war to keep the technology out of the Soviets’ hands — was discovered by veteran Hawaii Undersea Research Laboratory explorer Terry Kerby and colleagues from the National Oceanic and Atmospheric Administration and the University of Hawaii at Manoa’s School of Ocean and Earth Science and Technology.

The find not only solved a seven-decade mystery, but opens a window into the potency of the Imperial Japanese war machine and the American foresight of the looming Cold War.

“The I-400 is the big prize,” Kerby told Stars and Stripes earlier this month.

The Sen Toku I-400-class Imperial Japanese Navy submarine was the brainchild of Japanese Combined Fleet Commander-in-Chief Adm. Isoroku Yamamoto, according to Japan Maritime Self-Defense Force Cmdr. Masanori Ando, who works at the JMSDF Submarine Training Center in Kure, the city where the I-400 was built.

Yamamoto had reservations about taking on the sleeping giant that was America. In order to get the Americans to the peace talk table quickly, the Japanese would have to act swiftly and decisively.

The first part of his plan was the attack on Pearl Harbor on Dec. 7, 1941. The second part was a reign of terror to frighten the Americans into submission, with attacks on both the east and west coasts, possibly even Washington, D.C.

To accomplish this, plans were devised in January 1942 for a hybrid weapon: part aircraft carrier to launch planes that could attack mainland targets, and part submarine for stealth and the element of surprise.

Development of the sub took years, but when the I-400 was completed in 1944, it was the largest submarine ever built at 400-feet long and a surface displacement of 3,530 tons.

The I-400 carried 157 officers, engineers, electricians and pilots, Ando said. It had a twin-hulled design to support the weight of aircraft on its top deck.

“It is the only submarine that carried fighters,” Ando said. “There is no other example.”

The I-400 featured a 115-foot long, 12-foot diameter, water-tight hangar housing three M6A1 Seiran (Storm from a Clear Sky) torpedo-bombers above its main deck, according to the writings of U.S. Navy Lt. T.O. Paine, who sailed the vessel to Hawaii as executive officer of the prize crew at the war’s end. The fighters, with their wings folded in, were rolled out through a massive hydraulic door onto an 85-foot pneumatic catapult that launched them into the sky within minutes of the order being given. After completing their mission, they would land in the sea and be picked up and loaded back onto the sub using an onboard hydraulic crane.

“She was armed with eight torpedo tubes, a 5.5-inch, 50-caliber deck gun, a bridge 25mm anti-aircraft gun, and three triple 25mm A/A mounts atop her hangar,” Paine wrote. “Meals for her oversize crew were prepared in a galley in the starboard hull, where large steam kettles turned out great quantities of rice.”

In addition to its armament, the Japanese used a groundbreaking rubberized coating that would help the submarine remain undetected by allied sonar as it traversed the globe. A technology adapted from sharpening swords was used to keep the vessel sealed water-tight, Ando said.

Too little, too late

When all was said and done, the Japanese had a super weapon on their hands.

The submarine had a range of 37,500 miles and was able to travel around the world 1 1/2 times before it needed refueling, something that remains unmatched to this day by any other diesel-electric submarine, according to a University of Hawaii at Manoa statement.

Plans were to develop 18 of the subs to bring the war to America’s doorstep. However, the I-400 program suffered a setback when Yamamoto was killed by U.S. Army Air Force pilots on April 18, 1943, after the allies broke Japanese codes and shot down his plane while he toured the Northern Solomon Islands.

In July of 1943, the number of subs to be built was reduced to 11, then eventually to five in December, Ando said.

Japan was only able to complete three before the end of the war.

“We finally managed to complete underwater carrier even though the process did not go as planned since the submarine was tremendously big and there were lack of materials since the war was unfavorable [to Japan] and damages to the factories were increasing and the plan had to be changed many times,” wrote Tsugio Yata, the gunnery officer on I-401, in a newsletter for his veterans group, Naniwa Kai.

As the Americans closed in on the Japanese toward the end of the war, Yamamoto’s plans to attack the east coast were scuttled, Ando said. The two subs began training for a new mission where they would launch an attack at the Panama Canal and block U.S. ships from traveling from the Atlantic to Pacific oceans. The Japanese believed this would slow the American advance. However, this too was scrapped in June 1945 as the Americans drew closer still.

The I-400 and I-401 were then instructed to launch an attack on American forces gathering at the Ulithi atoll where they were preparing for an invasion of Japan. They headed out to sea from Maizuru on July 23 but were two or three days away from reaching Ulithi when the war ended.

“Even though it had the best technology in the world, it is not famous since it didn’t fight in the war,” Ando said. It is believed that developing the Seiran delayed the project to the point it was a non-factor in the war.

Both submarines were seized by the U.S. Navy on Aug. 28, 1945, as they made their way back to Japan. Their bombers had earlier been pushed overboard to avoid capture, but U.S. troops in Japan later found one surviving example and shipped it back for testing. That aircraft is now displayed by the Smithsonian Institution at its museum near Dulles International Airport.

As the occupation of Japan began, 24 operational submarines with Cherry Blossoms attached to their periscopes — as a farewell from their crews — were sunk off Goto Island near Sasebo in Operation Roads End, including the I-58, which had sunk the USS Indianapolis. However, five of the more unusual vessels, the I-400 and I-401, the 378-foot I-14, and the two fast attack subs I-201 and I-203, were to be taken to Hawaii for closer inspection.

“The high-ranking [American] officers visiting Japan all said, ‘wonderful’ and ‘big one,’” Yata wrote. “These were the words that anyone who saw that submarine says first.”

The I-400 departed from the bombed out city of Sasebo for Pearl Harbor on Dec. 11, 1945, escorted by the submarine rescue vessel USS Greenlet, Paine wrote. The I-14 was helmed by Commander John S. “Junior” McCain, father of Republican Sen. John McCain III of Arizona.

Paine wrote that every nook and cranny of the I-400 was filled with souvenirs taken from the crumbling caves in Sasebo, from guns and bayonets to Japanese goods. They were traded for leftover government supplies in Guam and other goods at every stop along the way: 16mm film projectors, movies, an automatic Silex Coffee Maker, canned hams and prime steaks.

When the subs arrived in Hawaii on Jan. 6, 1946 , they were studied extensively. The Soviet Union then demanded access under the terms of the treaty that ended the war, but instead of handing this new technology over to a potential future enemy, the Navy sank the subs off the coast of Oahu and claimed to have no information on their location.

“The [I-400 class] submarines led to offensive submarines after the war, where modern submarines loaded missiles,” Ando said. “It is said that I-400s were the model for this transition.”

Ando said the first American offensive submarine, the USS Grayback— which carried Regulus II nuclear cruise missiles — is said to be modeled after I-400.

For Kerby and his team, finding the submarines has become a passion. He began looking for Japanese submarines off the coast of Hawaii in 1992 and the five scuttled subs in 2005. Of the approximately 140 historic wrecks he has discovered off the coast of Oahu, included are the I-401, which he discovered in 2005, the I-14 and I-201 in 2007, and now the I-400. Only the I-203 eludes him for the moment.

Kerby and his team find the submarines by studying anomalies in ocean floor mapping. The objects he identifies could be a rock or a piece of history. When his Pisces V deep-diving manned submersible spotted the I-400 and its algae covered deck gun on Aug. 1, the excitement was palpable. The find was announced Dec. 2.

Like the three found before it, the I-400 is a symbol of what could have been and how the outcome of the war — and the world — could have been changed had they come a few years earlier. The sub will remain in the world’s greatest maritime museum, the ocean deep.

“They were unique,” Kerby said. “Too bad they didn’t keep one around, but at least we know where all [the I-400 class subs] are now.”

The I-400 traversed the Pacific from Sasebo, Japan to Pearl Harbor, Hawaii, during the Christmas 1945 holiday. Its prize crew skipper, Cmdr. J. M. McDowell, posted the following poem for the crew to read in the I-400’s control room, according to Paine’s writings.

A Merry Christmas, which I know Is better here than in Sasebo!

Next Christmas, and the ones to come, I hope all hands will spend at home.

Let’s hope and pray that ne’er again, Must we spend Christmas killing men.

That peace will reign beyond our time, No guns compete with Christmas chimes.

Let’s offer thanks for where we are, For Christmas time not spent at war,

And honor those who gave their lives, While we head home toward our wives.