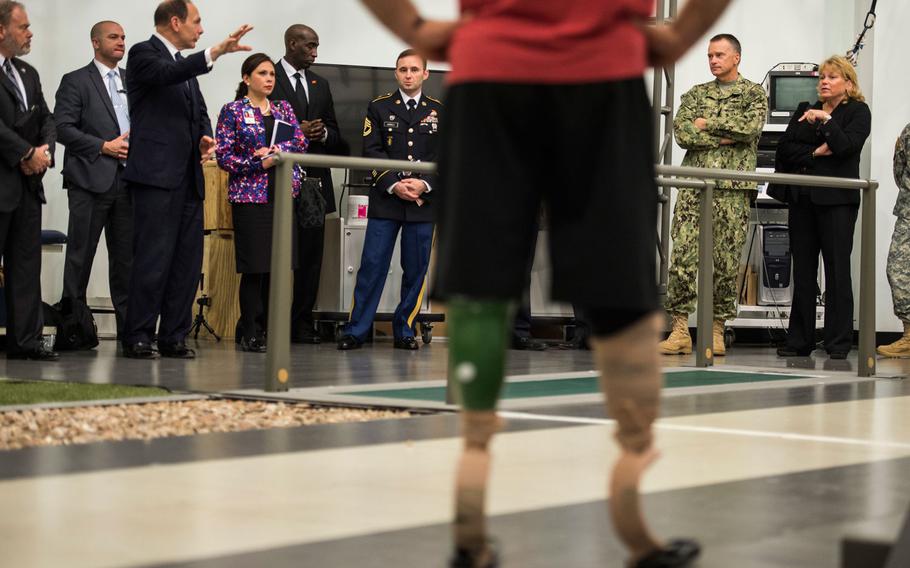 Department of Veterans Affairs Secretary Bob McDonald, left, talks with Vice Chairman of the Joint Chiefs of Staff Adm. James A. Winnefeld, Jr., right, during a wounded warrior demonstration at the Military Performance Lab during a tour of the Center for the Intrepid, Dec. 19, 2014. (Jonathan Snyder/U.S. Air Force)

Researchers have found that a combination of electronic and mechanical sensors could potentially help patients with lower-leg amputations intuitively control “powered” artificial limbs on stairs, inclines and level ground, according to a study published Tuesday in the Journal of the American Medical Association.

Scientists attached electrodes to participants’ thigh muscles, just above the amputation, and found that signals from these muscles — when synched with the prosthetic’s built-in sensors — gave the users much more stability when traversing the various terrains.

Powered leg prosthetics, only now nearing market stage, are designed to aid users by mimicking the appropriate ankle and knee joint movements for climbing or descending stairs, walking up or down an incline or striding at various speeds on the level.

The development is especially relevant to wounded warriors. About 1,190 servicemembers had at least one limb amputated while serving in Iraq and Afghanistan from 2001 through April 3, 2011, according to an analysis by the Congressional Budget Office.

Lower-leg amputations were the most common, accounting for up to 76 percent of amputations during that period, the JAMA study said.

Powered arm prosthetics have been available for decades, said Dr. Levi Hargrove, an engineer with the Center for Bionic Medicine Rehabilitation Institute of Chicago and an author of the study.

“But because leg prosthetics require stronger motors, they are only now reaching prototype stage,” he said.

The newly engineered powered legs don’t transition into those modes smoothly, Hargrove said. Patients must slow down or stop, then either press buttons on a controller or make “unrelated body movements,” such as exaggerated hip extensions or rocking forward and backward on the prosthesis.

“We want the user to be able to seamlessly control whatever they want to control so we’ve used [electronic signals] that allow them to use the muscles to transition to these activities automatically and intuitively,” Hargrove said.

The JAMA study, conducted by researchers from the bionic medicine center and the departments of Biomedical Engineering and Physical Medicine and Rehabilitation at Northwestern University, analyzed the movements of seven patients with lower-leg amputations who were experienced in using non-powered prosthetics.

The participants were fitted with a prosthesis — with powered ankle and knee — that was designed by the Center for Intelligent Mechatronics at Vanderbilt University in Nashville. It possessed 13 built-in sensors to aid control of position, velocity and torque, among other things.

For this study, researchers placed nine electromyographic, or EMG, sensors on a participant’s thigh muscles above the amputation.

“By looking at these signals and using pattern-recognition algorithms — like what are in your phone that decode your voice — we can figure out how the person is trying to tell their prosthesis to move,” Hargrove said.

The researchers then monitored for “classification error,” meaning the percentage of steps that the sensing system got wrong as the participants moved through various terrain. Such errors can potentially cause prosthetics users to stumble and even fall.

They found that classification error was “significantly lower” when using the combination of mechanical and EMG sensors.

“Every patient noticed the system that incorporated the muscle signals and the algorithms, and they felt more comfortable and confident when they were walking with it,” Hargrove said.

The test was double-blinded, meaning that neither the patients nor the technicians monitoring the test knew which set of sensors was being used at any given time. The researchers are now incorporating some enhancements to the leg as a result of the study data and will then move into home trials.

Fifteen participants will use the prosthesis at home, and researchers will collect data on, among other things, “social mobility,” to determine changes in actual lifestyle, Hargrove said.

“In the lab we said, yes, this has the potential to make a big improvement over what people have,” he said. “And now we’ll be doing the study that will objectively quantify and put numbers on that.”

This phase will include some Iraq and Afghanistan veterans, he said. Researchers will partner with the San Antonio Military Medical Center.

“One thing I always try to emphasize is how important it is that the engineers and the scientists and the patients all work together to make these developments because if you put a bunch of engineers in a room they might not engineer the right piece of technology,” Hargrove said. “The team approach is really critical to developing something that’s useful to people.”