Researchers looking to extend howitzer's range to more than 40 miles 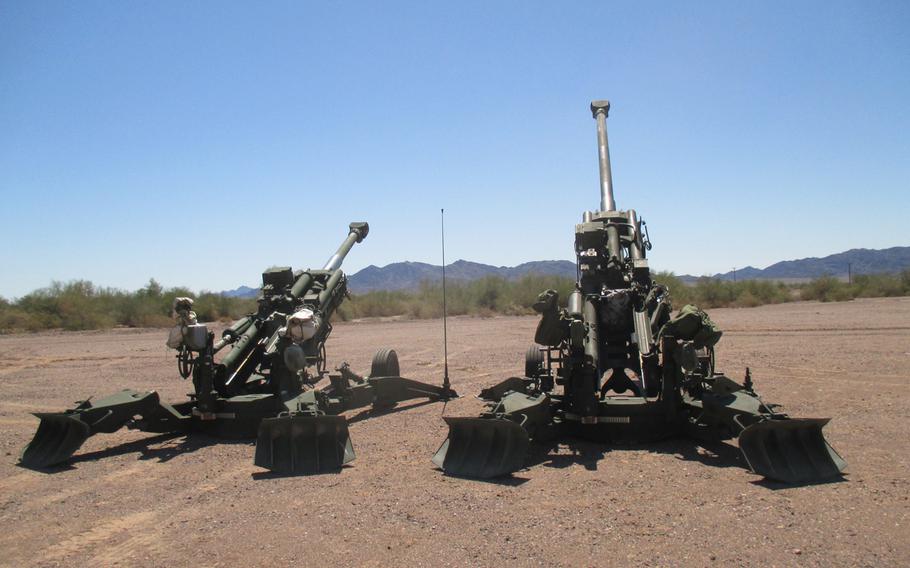 The modified 155 mm M777A2 howitzer, right, will have a range of more than double that of the current version, left, from 18 to 43 miles. The new howitzer also boasts precision-guided munitions, making it the lightest, farthest-reaching and most accurate towed system in the world. (Mark Schauer/U.S. Army)

The modified 155 mm M777A2 howitzer, right, will have a range of more than double that of the current version, left, from 18 to 43 miles. The new howitzer also boasts precision-guided munitions, making it the lightest, farthest-reaching and most accurate towed system in the world. (Mark Schauer/U.S. Army) 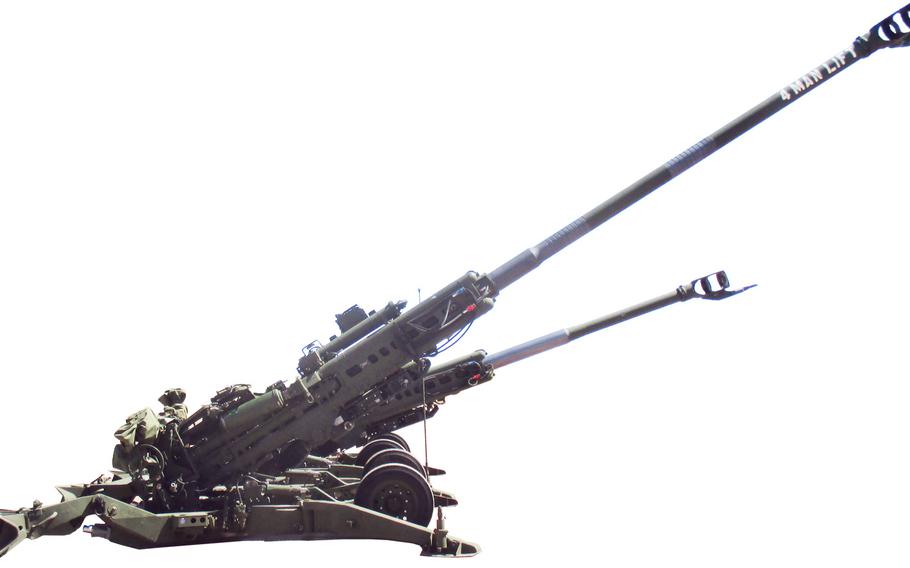 The modified 155 mm M777A2 howitzer, front, will have a range more than double that of the current version, background, from 18 to 43 miles. The new howitzer also boasts precision-guided munitions, making it the lightest, farthest-reaching and most accurate towed system in the world. (U.S. Army illustration)

While the U.S. military was fighting wars in Iraq and Afghanistan, some potential adversaries were beefing up their weapons systems.

Perhaps the most glaring shortfall in the current American arsenal is the range of its artillery, military officials said.

The U.S. military’s top artillery weapon — the M777 155 mm howitzer — while accurate, can only shoot projectiles up to 18 miles. And while America was busy taking on the Taliban and ousting Saddam Hussein, China, Russia and others have improved and built new artillery systems that can fire nearly 40 miles — which would put U.S. troops in harm’s way in any potential future land battle.

But engineers at the U.S. Army’s Picatinny Arsenal in New Jersey say they are in the process of putting the United States back on top, developing a modified M777A2 howitzer that has the potential to increase the weapon’s range to 43 miles, with precision-guided munitions.

The artillery piece — not expected to be on the battlefield for several years — will be the lightest, farthest-reaching and most accurate towed system in the world, developers said.

“While we were bogged down for 10 years in the Middle East, the rest of the world wasn’t; they advanced their artillery capabilities well beyond what we could do,” said David Bound, of the M777ER Lead, Artillery Concepts and Design Branch, which is part of the Armament Research, Development and Engineering Center, or ARDEC. “It concerned the Army.”

Bound said that engineers at Picatinny began examining the issue in 2012 as the wars in both countries were starting to wind down.

Currently, the U.S. Army and Marine Corps field three howitzers — the M777 with a rocket-assisted projectile, the self-propelled 155 mm Paladin, and the 105 mm howitzer.

After recognizing the shortfalls, various programs sprung up to look at tweaks to everything from the projectiles, to the howitzer cannons, to entirely new weapons systems. As tangible improvements got closer to reality, researchers and developers from different departments joined forces to form Program Manager Towed Artillery Systems, or PM-TAS.

When the creative smoke cleared, engineers thought it best — and conceivable — to build a vastly superior howitzer that uses the same titanium body, saddle and cradle, or upper carriage that holds the cannon, as the current system, according to Keith Gooding, PM-TAS head. This will undoubtedly cut costs and time spent training.

The PM-TAS team’s prototype howitzer features a cannon that is 6 feet longer than the current one and has increased chamber volume for a new and improved propellant that is also under development. The cannon will also feature new contours to help increased energy dissipation. Improvements are also being made to the motors of the projectile rockets, which will also increase range.

Once all of the upgrades are complete, the M777, “will be able to reach out and hit targets well in excess before the targets can reach them,” Bound said. “So the warfighter won’t have to worry about coming into a situation where they are under fire before they can return fire.”

The alterations will add fewer than 1,000 pounds to the overall system.

The conversion kits will cost about $700,000 each, if and when they reach production. The howitzer’s themselves cost approximately $2.5 million each. The finished product will eventually be delivered to Army and Marines, who are jointly funding the project.

Officials said it is important to get the weapons into the hands of troops in the field as soon as possible.

China and Russia will sell their weapons to just about anyone. That means they are vulnerable to falling into the hands of Islamic State fights or other enemies.

Ultimately, the speed of the handover is budget dependent, Picatinny officials said. The more money pumped in, the quicker things go. The U.S. also must contend with the most strict safety guidelines in the world.

Right now, the team is testing the mobility of the howitzer, Gooding said. The artillery piece is usually towed by its muzzle using a vehicle or flown in by Osprey and then towed. They need to make sure that adding six feet to the cannon won’t be a problem.

They plan to start shooting the new weapon early next year at Yuma Proving Ground, Ariz.

“This extended range capability with precision is going to be that next leap ahead,” Gooding said.