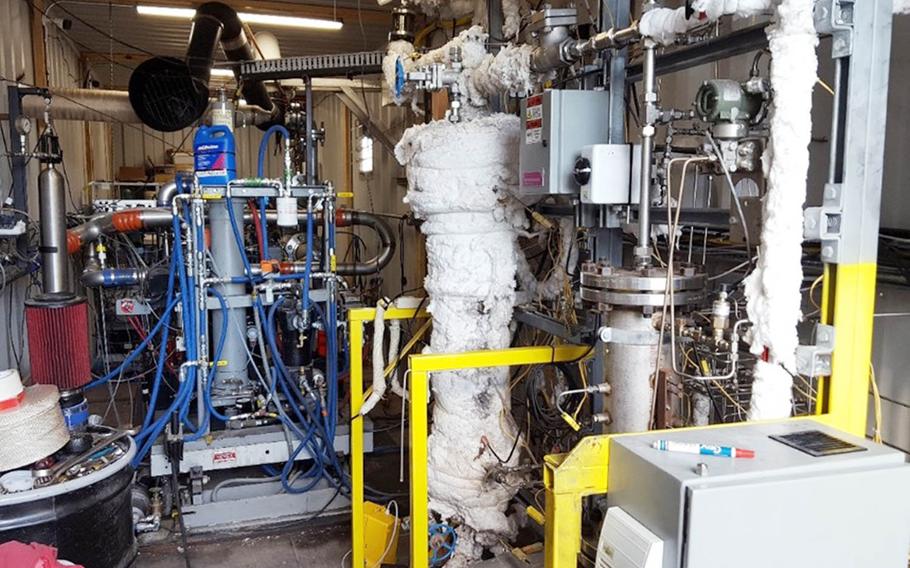 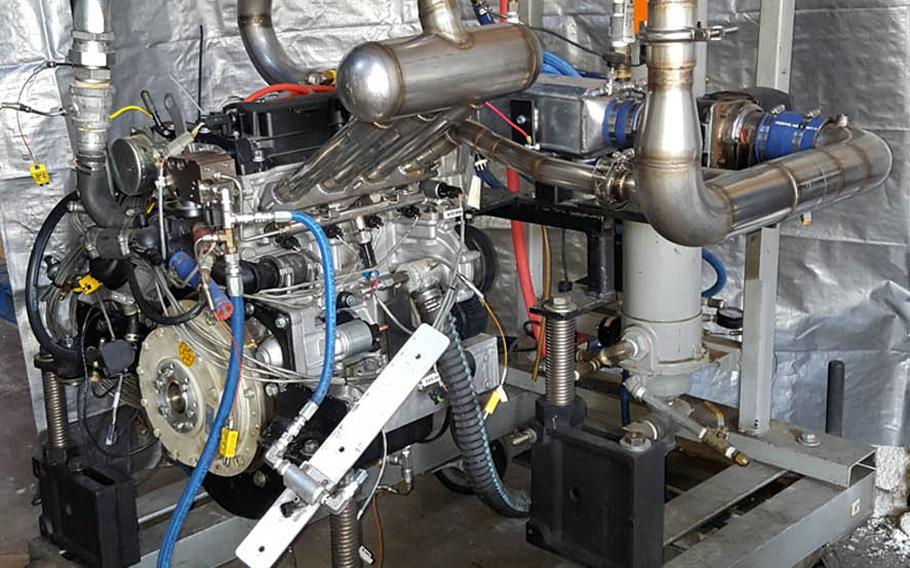 Chemical weapons like chlorine, mustard or sarin remain a very real threat to U.S. troops in the Middle East and Pacific. Both the Syrian government and Islamic State have used them in that country since the brutal civil war kicked off in 2011, according to the United Nations and international monitors, and North Korea is believed to possess its own stockpiles.

Removing chemicals for destruction at treatment facilities presents its own set of challenges, from their volatility, especially in a degraded state, to being susceptible to attack. Destruction also leaves behind large amounts of hazardous waste.

Thanks to a recent research proposal — called “the ACDC system” — by the Southwest Research Institute in San Antonio, the deadly threat may soon be much easier to manage, using something as simple as a modified car engine and a dump truck full of dirt.

U.S. researchers are developing a portable system that will not only neutralize chemical weapons at their point of origin, avoiding the dangers of transportation to treatment facilities, but will also leave behind no hazardous waste that must then be carried out.

“You want to have a tool that can go into those locations, destroy the materials on site without the burden of having to find water and then without the burden of having to dispose of the hazardous waste that was created,” said Tyler McQuade, the Defense Advanced Research Projects Agency’s program manager for the portable disposal unit. “That’s sort of the backdrop to why we needed a program, why we needed a tool.”

The U.S. government set out to create a mobile disposal system after the precarious yet successful disposal of Syria’s chemical-weapons stockpile in 2014.

The international community agreed to take possession of and destroy Syria’s stockpile of chemical warfare agents, such as sarin, soman, mustard gas and toxic industrial chemicals, after an alleged sarin rocket attack in Ghouta in 2013. The agents were collected and taken out of Syria and taken to the MV Cape Ray, a U.S. merchant vessel outfitted with a dual hydrolysis system that filled the ship’s decks, said Darrel Johnston, a senior program manager in SwRI’s Chemistry and Chemical Engineering Division.

The Cape Ray system was revolutionary at the time, perhaps one of the smallest disposal facilities in history. But while each system fit into two intermodal shipping containers, it still needed dozens of support containers.

“Even though it was very successful, it was asking for a lot of good things to happen,” McQuade said. “Moving the material from its location in Syria to the port where it was loaded onto the ship and then the ship moving through the Mediterranean, there were a number of areas where you were potentially at risk … the people who carried it out wonder whether or not it could be replicated.”

Incineration and hydrolysis SwRI has been involved with the destruction of chemical weapons since the beginning, Johnston said. The Army began experimenting with incineration as a way to dispose of chemical warfare agents in the 1980s. Incineration was the best technology at the time.

The Army built a prototype facility in Utah and later a full-scale version on Johnston Atoll in the North Pacific to deal with stockpiles that had been kept on Okinawa and in Europe.

SwRI had the contract for laboratory support, and Johnston found himself on the island.

“It was a large facility,” he said. “It would take up a couple of city blocks, I suppose.”

The U.S. then built several other disposal sites in Utah, Oregon, Alabama and Arkansas. They were efficient and did the job as intended, Johnston said; however, they were massive and produced a large amount of liquid and solid waste.

The next technology to be explored was hydrolysis, which is the process of breaking down chemicals with water and lye, Johnston said. Sites dedicated to this practice popped up in Indiana and Maryland.

“Those produced large amounts of liquid waste for the amount of chemical-warfare agent,” he said.

Hydrolysis is still being used at large facilities in Kentucky and Colorado. Processes have since been developed to further treat the waste before it is shipped off site.

“So all the time, everybody had the idea, we gotta make a portable system,” Johnston said.

A portable system The ACDC program kicked off in August 2015, McQuade said. Their initial call for proposals asked for a portable system that could be taken into a remote location, destroy the chemical warfare agent and leave behind no hazardous byproducts.

Numerous proposals came in. SwRI was awarded a contract a month later and immediately became a top performer.

The idea for SwRI’s proposed ACDC system came from Johnston and his days back on the atoll that shares his name, where mustard sustained its own incineration. The liquid-incinerator system on the atoll would kick on using fuel and once it was burning a chemical-warfare agent, would burn solely on that. The heat was not captured but could have been used to power the island, Johnston said. This stuck in his mind.

Johnston wondered if an internal combustion engine that ran on chemical-warfare agents would work.

SwRI had a four-cylinder engine from a sport compact car on hand that had been modified into a patented dedicated exhaust gas recirculating engine, McQuade said. This means that one cylinder was getting fuel with no chemical-warfare agent, which created exhaust gases rich in combustion-enhancing hydrogen and carbon monoxide. That cylinder’s gases were then combined with fresh air in the intake with additional fuel and chemical warfare agent, which allowed researchers to tune the combustion chemistry to better burn the agent.

The byproduct then moves to a polishing secondary thermal-treatment unit, which is like a kiln, further breaking down the material.

The system is expected to fit inside a single shipping container.

Jimell Erwin, SwRI’s chemical engineering department director, had the idea of pairing the engine with soil scrubbing, or pumping the exhaust through soil rich in calcium carbonate to absorb and neutralize acid gases such as hydrochloric and hydrofluoric acids and sulfur dioxide — that are left over.

The idea was to pump the exhaust through dump trucks with beds full of soil.

Soil scrubber The soil used for a particular mission has to be pre-selected because various agents require different elements for neutralization, Johnston said. They can look at world soil maps and find out where ideal soils are located and then dig down for them or travel a few miles to pick them up.

Johnston’s team began developing the soil-scrubber system in June 2016 and delivered a proof-of-concept system in February, he said.

“It is in our national interest to have a field-operable unit that can safely dispose of chemical-warfare agents and other dangerous chemicals on the front lines in a timely manner,” Johnston said.

Johnston and the team are heading into the second phase, which will see them ditch the four-cylinder engine for a large, semi-truck six-cylinder diesel engine. Phase 3 will see a deliverable prototype, including dump trucks full of soil. A final prototype is expected to be delivered to the U.S. government for testing by March 2019.

The waste energy will be captured by a generator to provide power, McQuade added.

“The heroes are at Southwest Regional Institute,” he said. “They make me so excited to be an American.”

When all is said and done, Johnston sees a semi-truck hauling a container with the system inside, along with maybe five support vehicles — a fuel truck, a front-end loader and dump trucks for the soil scrubbing.

“The goal was to take it from these things that take up acres of real estate and produce a huge amount of waste to something that fits in a semi-truck — has some supportive equipment around it, you know, earth-moving equipment — and leaves behind no waste,” Johnston said. “It was a pretty audacious goal but it at least looks possible.”