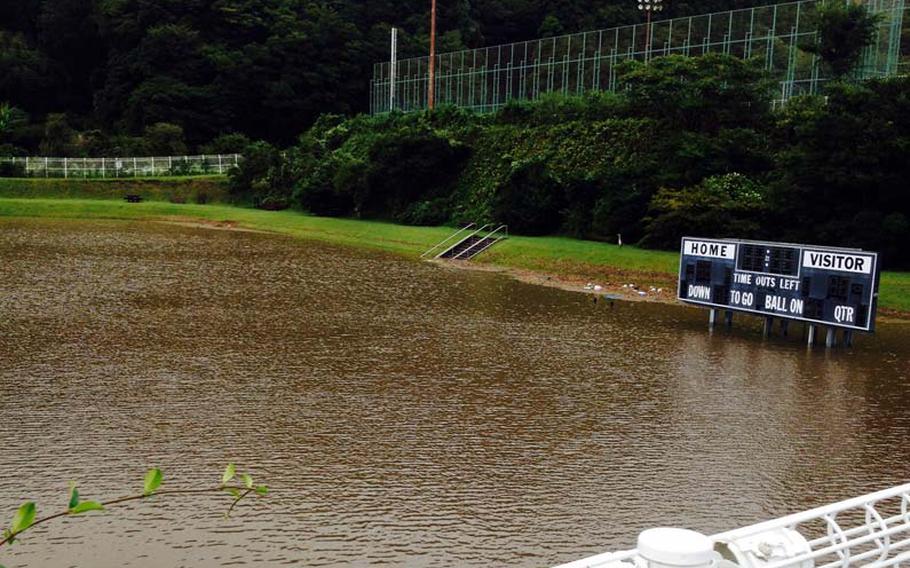 Flooding is seen at Ikego Housing Area, near Yokosuka Naval Base, on Monday morning, Oct. 6, 2014, after Typhoon Phanfone passed by the Tokyo area. (Photo courtesy of Jocelyn Namalich)

Air Force and Japanese rescuers on Wednesday recovered the body of the last remaining airman who went missing when a group of men was swept out to sea by high waves lingering from Typhoon Phanfone on Okinawa.

The airman’s body was discovered in the water a few miles south from where the group was last spotted on the northwest coast of of the island. The release of the airman’s identity is being withheld pending the next-of-kin notification.

The body of Senior Master Sgt. James Swartz was recovered by the Japan Coast Guard on the day of the incident. Two days later, the body of a second airman, whose identify is also being withheld, was discovered.

A fourth airman was able to pull himself from the surf and survived.

All three of the deceased airmen were temporarily assigned to Kadena Air Base from Robins Air Force Base, Ga.

A dignified transfer ceremony was held on Kadena on Wednesday, with the three airmen’s remains were flown off of Okinawa via military aircraft.

“We continue to grieve with the family, friends and fellow airmen of those lost in this tragedy,” Col. Thomas Torkelson, vice commander of the 18th Wing was quoted as saying in an Air Force news release. “And we will never leave an airman behind.”