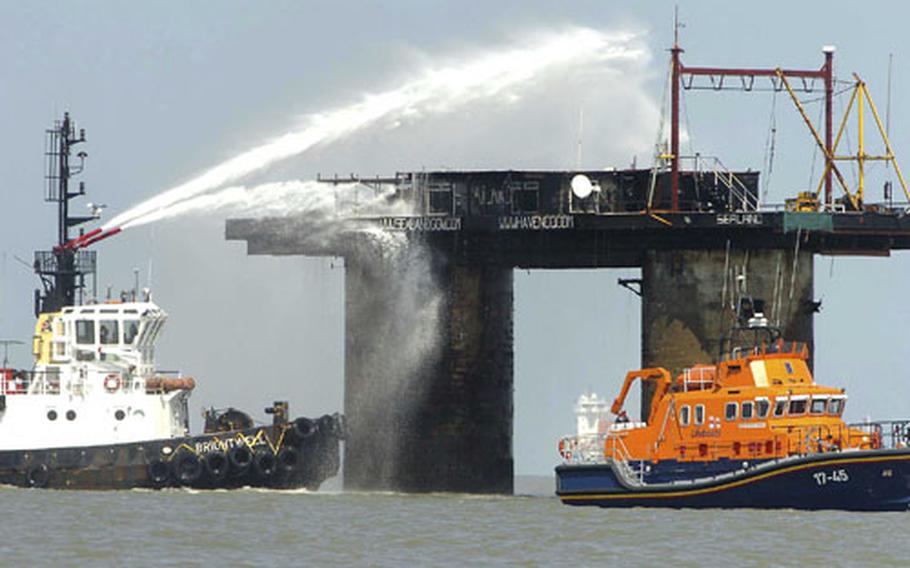 The Felixstowe Port tug Brightwell douses the Sealand platform while the Harwich lifeboat stands by during a fire June 23. (Courtesy of the Archant Group/EADT Star News)

A fire had trapped a man on a former World War II anti-aircraft military platform off the Suffolk Coast. But this was no ordinary war relic.

Kay and his squad arrived to find &#8220;one end of the platform very much on fire&#8221; as well as one man happy to see the foreign aid.

The rescue squad used a winch and harness to rescue the stranded man, whom the British Ministry of Defence refused to name. The man suffered minor internal injuries that affected him immediately after the rescue.

The rescue helicopter flew the man to Ipswich&#8217;s Heath Road Hospital, where he was treated and released the same day.

According to its Web site, Sealand published a press release soon after the incident. The release indicated that the fire started in the main power generation facility and that the person airlifted to safety was the island-nation&#8217;s lone security detail. Damages were estimated at 1 million Sealand dollars, which equates to $1 million U.S.

The release thanked the Royal National Lifeboat Institution, the Harwich Harbor Authority, the coast guard and the Royal Air Force for their service.

&#8220;The fire, thanks to them, was extinguished some four hours after it began and damage was limited,&#8221; the release stated.

Sealand is an odd member of the world&#8217;s community of nations. The artificial island was built by the British government during World War II and was equipped with radar and anti-aircraft guns, according to Sealand&#8217;s Web site. It was populated by 200 servicemembers whose job was to protect the Thames Estuary. It was promptly abandoned after the war.

The platform-cum-country was destined to fade into maritime history if not for an eccentric British family who manned the island in 1967. They planted a flag and declared it the Principality of Sealand.

For decades, the Sealanders were known as an odd, seafaring crew determined to protect their country &#8212; all 6,000 square feet of it.

In 2000, a group of American investors teamed up with the son of the founder of Sealand to alter the future of the platform.

The Americans, led by a Massachusetts Institute of Technology dropout, formed HavenCo Ltd., the world&#8217;s first offshore electronic data haven, according to an article in Wired magazine.

&#8220;The Sealand Government is ideal for Web business, as there are no direct reporting or registration requirements,&#8221; states the HavenCo Web site.

Stars and Stripes tried but was unable to reach a representative of Sealand.

Two weeks ago, when the fire struck, the nation that fiercely defends its autonomy had to look to Britain for help.

Sealand is some six miles off the coast of Britain in the North Sea and 65 to 100 miles from the coasts of France, Belgium, Holland and Germany.

It was founded as a sovereign principality in 1967.

Its law is based on British Common Law and British Law of Contract.

There have been Sealand passports and stamps in circulation since 1969.

The principality&#8217;s flag is red, white and black.

The official language is English.

One Sealand dollar is equal to one U.S. dollar.