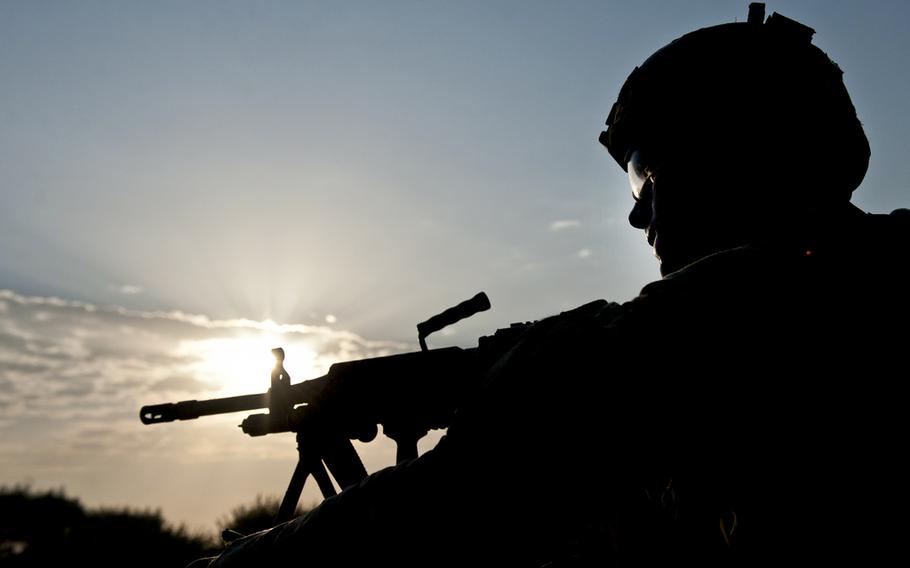 WASHINGTON — The U.S. military has recommended that President Barack Obama maintain 10,000 American troops in Afghanistan to provide adequate force protection after the official end of combat operations this December — or bring essentially all U.S. troops home.

The recommendation came from Gen. Joseph Dunford, the top U.S. and NATO coalition commander in Afghanistan, who discussed it during a recent meeting of the White House National Security Council, officials said.

“The intelligence community, the State Department and military leaders believe that that’s about the right number to do the sorts of things we believe need to be done after 2014,” a U.S. government official familiar with the discussions told Stars and Stripes, speaking on the condition of anonymity.

Dunford said a troop presence smaller than 10,000 would not provide adequate protection for U.S. bases in Afghanistan, the official said. And according to the Wall Street Journal, officials with intelligence agencies and the State Department reportedly told the White House an adequate number of U.S. troops is needed to protect their missions as well.

“The proposal is 10,000 or basically nothing, a pullout,” an official familiar with internal administration deliberations told The New York Times.

The 10,000-troop option also calls for the level to fall to near zero by the time Obama leaves office in early 2017, both newspapers reported, rather than perhaps 2024, as has been reported many times. After the drawdown — whether it happens sooner or later — officials said only a few hundred troops would be stationed at U.S. Embassy in Kabul.

Some officials in the White House National Security Council, including Vice President Joseph R. Biden Jr., question why the choice has to be 10,000 troops or zero, and nothing in between, the Times reported.

A White House official said the internal discussions hadn’t yet yielded anything to announce about future troop numbers.

“The President has not yet made decisions about final troop numbers and I’m not going to discuss the details of our ongoing deliberations,” NSC spokeswoman Caitlin Hayden said in an email. “We will be weighing inputs from our military commanders, as well as the intelligence community, our diplomats, and development experts as we make decisions about our post-2014 presence in Afghanistan.”

There are currently about 37,500 U.S. troops in Afghanistan, according to the Pentagon. That is scheduled to fall to 32,000 next month, and is expected to continue to decline following the Afghan presidential election in April.

The administration said last year it was planning to keep between 8,000 and 12,000 U.S. and NATO troops in the country to train, advise and assist Afghan troops, as well as to conduct counterterrorism operations against al-Qaida.

But the future presence of Western troops there was thrown into doubt in November when Afghan president Hamid Karzai refused to sign a bilateral security agreement with the United States.

The agreement, which was approved by a gathering of thousands of Afghan elders and local leaders, would grant U.S. troops immunity from the Afghan legal system and set other parameters for the U.S. presence.

But Karzai has thrown up a number of objections, including a demand that Western troops be barred from entering Afghan homes during counterterrorism raids.

Hayden said in the email that if the agreement is not signed soon, the United States would be forced to begin planning a complete withdrawal of troops — an eventuality she said the United States is not seeking.

“(W)e are talking about weeks, not months, left on the clock to conclude the BSA,” she said.

“But if those missions are not desired — and certainly without a bilateral security agreement being signed there is no point in having troops there at all,” the official said.