Reports: Teen arrested in Vienna had made plans to plant bomb at Ramstein Air Base 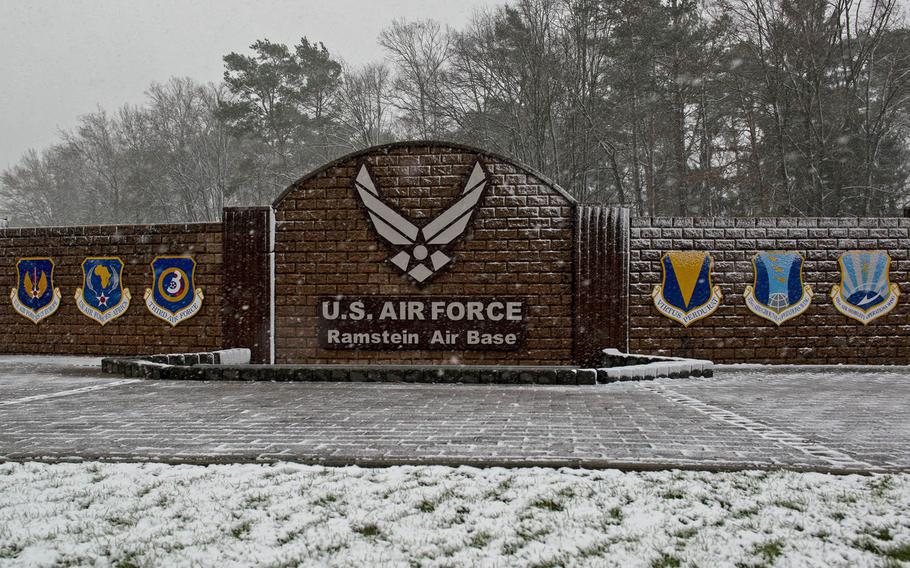 Near the west gate of Ramstein Air Base, Germany. According to Austrian and German media, a 17-year-old man who was arrested Jan. 20 in Vienna said he considered attacking the air base with a bomb. (Tryphena Mayhug/U.S. Air Force)

KAISERSLAUTERN, Germany — A 17-year-old Islamic State sympathizer planned to set off a pipe bomb near Ramstein Air Base but changed his mind because he didn’t want to “kill so many people,” according to media reports.

The Austrian weekly newspaper Falter reported this week that the 17-year-old, identified only as Lorenz K, told police of the plan after he was arrested in Vienna on Jan. 20 when an acquaintance reported him to authorities.

Falter said it had obtained a transcript of the youth’s questioning. German police and Austria’s Interior Ministry refused to comment on the report. “Report Mainz,” a German television show, had also received copies of the same transcript, media said.

According to Falter, Lorenz K., told police he planned to place the bomb under a garbage can near Ramstein, the largest U.S. air base overseas, in December.

“That is what I planned to do. But I did not have the heart to do it,” he was quoted by Falter as saying. “I could not … really kill so many people.”

Base officials at Ramstein said Wednesday that they were aware of reports about the planned bombing and that base leadership regularly reminds airmen and their families to remain vigilant.

“The safety and security of our personnel and their families is one of our top priorities, and we take the responsibility for ensuring the security of our community very seriously,” base spokeswoman Kelly Sanders said in a statement. “We continually evaluate our security posture and procedures, and take necessary actions as appropriate to ensure our community remains safe and secure.”

Lorenz K., had found instructions online on how to make a bomb, similar to the one used by a 27-year-old Syrian man last summer who blew himself up outside a concert in Ansbach, the weekly said. Fifteen people were injured in that incident.

Falter, which said the man was a Muslim born in Austria, said it’s believed he was radicalized while spending time in prison in 2015 for a variety of offenses. While on probation, he told investigators, he contacted a member of the Islamic State group via Facebook.

Rather than fighting for the Islamic State in Syria, the suspect said, “I wanted to do something in Europe. I hate the German military because they participate in fights against Muslims.”

The Falter report was published on the eve of a series of predawn raids Wednesday in the German state of Hesse that targeted dozens of properties and resulted in the arrest in Frankfurt of a Tunisian suspected of planning a terrorist attack that city, The Associated Press and German news agencies reported.

The 36-year-old man, a Tunisian asylum-seeker, had been suspected of recruiting for the Islamic State in Germany since August 2015 and building up a network of supporters. He was arrested in Frankfurt.

Separately, German media reported Wednesday on a video aired recently by a Turkish television station. In propaganda-style, the video claimed that Turkish soldiers who formerly worked at Ramstein for NATO had helped plan the military coup last summer against President Recep Tayyip Erdogan, with help from soldiers from other NATO countries.

Michael Wawrzyniak, NATO’s press secretary at Ramstein, told Germany broadcaster SWR that the accusations presented in the video were false and the report was full of misinformation.

Since the failed coup attempt in July, conspiracy theories have flourished in Turkey regarding the notion that the U.S. and NATO had a role in trying to overthrow Erdogan.

U.S. officials have rejected such accusations, which often have been carried in Turkish newspapers.

Still, the coup attempt has strained relations between Washington and Ankara, which has pulled many of its military officers from NATO headquarters in Brussels.