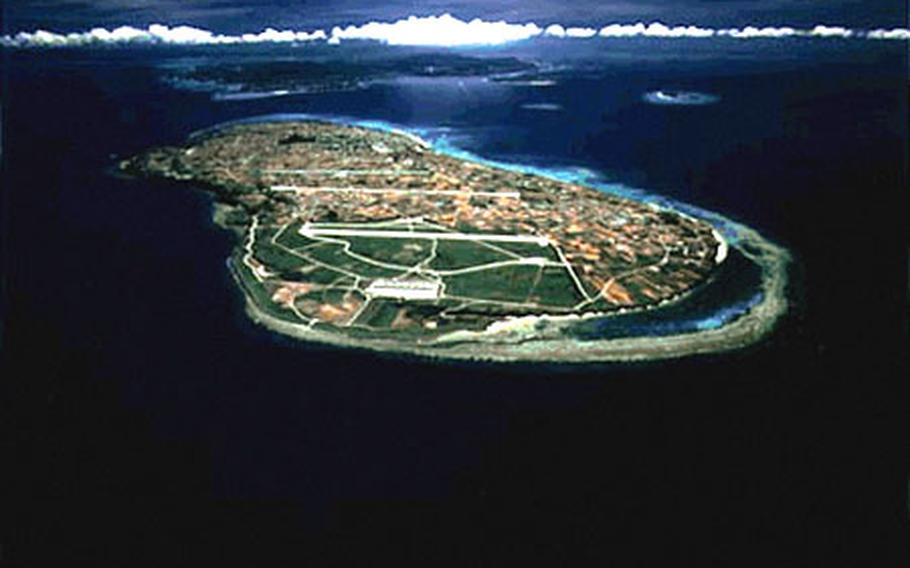 Ie Shima Auxiliary Airfield is on an island off Okinawa’s northwestern shore. (Courtesy to Stripes)

So many of Ie Shima&#8217;s 5,300 residents agree so strongly that acting solely on unconfirmed weekend news reports, the Ie Shima Village Council, in emergency session Monday, voted unanimous approval to a resolution opposing any increased airfield activity. Officials said the resolution is to be delivered to Okinawa&#8217;s governor and top Japanese and Okinawan officials.

The Japan Times, quoting anonymous &#8220;senior Japanese officials,&#8221; reported that the United States and Japan are discussing moving a helicopter unit from Marine Corps Air Station Futenma to Ie Shima as part of a realignment of U.S. forces in Japan.

The existing airfield, covering about a third of Ie Shima, is used mostly for parachute drop training.

The mayor remained skeptical Monday of Japanese officials&#8217; denial they have any such plans for Ie Shima.

The Japanese media reports appeared on two local papers&#8217; front pages. Regardless of their accuracy, the mayor said, &#8220;it makes an immense impact on our residents. If we did not take any action, it would create ... confusion and problems in the future.&#8221;

U.S. military bases cover about a fifth of Okinawa. In 1996 the two governments agreed to return about 21 percent of that total to Japan. Key to the plan was closing the Marine base at Futenma and moving air operations to an alternate site elsewhere on Okinawa.

A site off the northeast coast near Henoko was chosen but construction, which has yet to begin, might take 10 years or more. The August crash of a Marine helicopter just outside MCAS Futenma caused Okinawa officials to demand that Washington and Tokyo officials find a more immediate solution.

Ie Shima, 5.6 miles from Okinawa, already has a 2,000-meter runway, the same length as the proposed Henoko runway.

A Marine spokesman would not confirm that moving a helicopter unit to Ie Shima is on the table.

&#8220;It is inappropriate for the Marine Corps to discuss specific aspects of these discussions,&#8221; said 1st Lt. Eric Tausch. &#8220;However ... the Marine Corps is ready to move to a suitable replacement facility that meets its operational requirements.&#8221;

A Japanese government spokesman in Tokyo Monday evening said the Ie Shima village council could have avoided the emergency meeting.

&#8220;There is no such fact as stated in media reports,&#8221; said a spokesman for the Director-General&#8217;s Secretariat at the Self-Defense Agency.