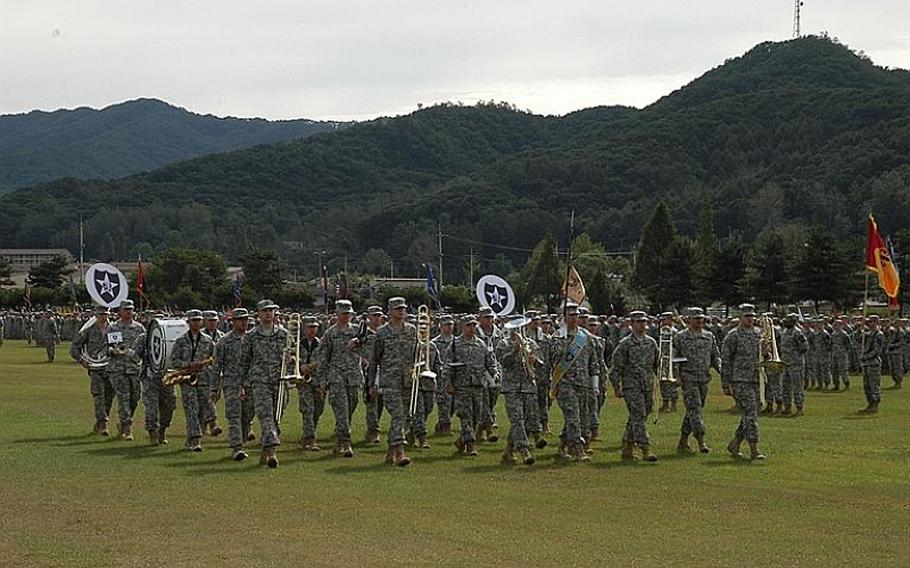 The 2nd Infantry Division Band marches at a change of command ceremony at Camp Casey in South Korea in September 2011. Local officials are upset over reports the U.S. military is lobbying to leave a brigade behind when American troops consolidate south of Seoul in 2016. (Jon Rabiroff/Stars and Stripes)

SEOUL &mdash; Dongducheon officials are upset about reports the U.S. military is lobbying to leave a brigade behind at Camp Casey &mdash; in their city about 15 miles south of the Demilitarized Zone &mdash; when American troops here are consolidated south of Seoul in 2016.

The seven members of the Dongducheon Municipal Assembly want the base vacated and the property turned over to the city as originally planned for the economic well-being of its residents.

&ldquo;We&rsquo;re feeling extreme frustration and anger,&rdquo; the assembly members said in a statement. &ldquo;We think the plan is to ignore the over 100,000 people of Dongducheon.&rdquo;

The assembly members protested earlier this week outside the offices of the South Korea Ministry of National Defense. They also met with a ministry representative to register their objections to the behind-the-scenes negotiating reportedly under way.

U.S. Forces Korea officials have proposed to their South Korean counterparts that the 210th Fires Brigade remain at Camp Casey in 2016, when virtually all 28,500 American servicemembers here are scheduled to be moved to regional hubs in Daegu and the Pyeongtaek/Osan area &mdash; both of which are south of the capital, Korean media outlets have reported.

USFK personnel are currently spread across more than 100 bases all over South Korea. More than half of the U.S. military installations here will be turned over to the South as they are vacated during the troop consolidation.

In Dongducheon, officials have said they plan to set aside property for a science park, a university and corporate development once the 8,000 troops on Camp Casey are relocated.

The scheduled 2016 move of American troops away from North Korea and the DMZ is part of a multi-faceted plan designed to give the South&rsquo;s military a higher profile in the defense of its country.

However, South Korean government and military sources were recently quoted in Korean news outlets &mdash; including The Chosun Ilbo and Yonhap News Agency &mdash; that U.S. officials are concerned their forces would not be able to respond quickly enough to a North Korean attack if the 1,500 soldiers and equipment of the 210th Fires were based at Camp Humphreys in Pyeongtaek, 45 miles south of Seoul, as is planned.

In the event of such an attack, the brigade would be responsible for neutralizing the North&rsquo;s heavy mechanized units and long-range artillery.

USFK issued a statement in response to those reports that it was lobbying to keep the 210th Fires at Camp Casey, saying, &ldquo;As a matter of policy, we do not discuss operational planning.&rdquo;

However, USFK did not deny the reports, nor did it post any statements of clarity or correction as it has done in the past in response to items in the Korean media it felt were misleading or mistaken.

Dongducheon officials said, in essence, leaving only about 20 percent of the troops now based at Camp Casey there after 2016 would be the worst scenario of all, because the city would not get the property and there would be fewer U.S. soldiers spending into the local economy.

&ldquo;Dongducheon is under economic siege since 42 percent of its land has been used &hellip; for national security, and development has been restricted, over the past 60 years,&rdquo; the assembly members said in their statement.

&ldquo;The (South Korean) government must improve our people&rsquo;s trust in it by carrying forward with the relocation plan of the 2nd Infantry Division to Pyeongtaek,&rdquo; the statement said.

An MND official said Dongducheon officials were told that, at this time, &ldquo;The plan remains unchanged,&rdquo; and Camp Casey will be vacated.

As for any potential revisions to that plan, he said, &ldquo;We must handle this thing through discussions with the relevant authorities and local governments.&rdquo;