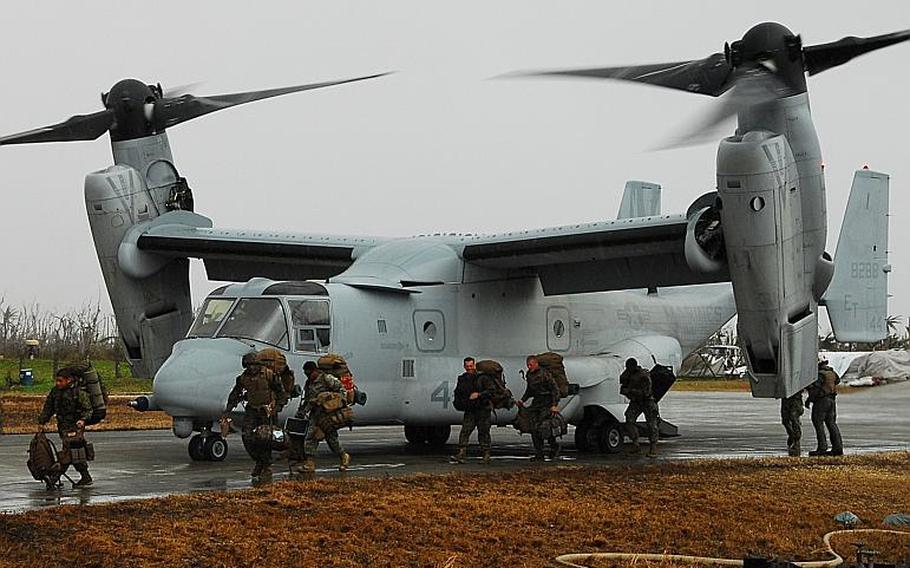 Buy Photo
Marines get off a V-22 Osprey at the typhoon devastated town of Guiuan in the Philippines in November 2013. (Seth Robson/Stars and Stripes)

YOKOTA AIR BASE, Japan — Japan plans to acquire its own fleet of V-22 Osprey tilt-rotor aircraft as part of a wider effort to counter China’s military build-up in the East China Sea, according to Japanese news reports.

The Japanese Self-Defense Forces are looking at buying 17 Ospreys, according to reports in major Japanese newspapers, which detail a five-year defense build-up that Japan’s cabinet is scheduled to vote on Tuesday.

The program, valued at 24.67 trillion yen ($238 million), includes new tanks, unmanned aircraft, aerial refuelers, submarines, destroyers and amphibious vehicles that could ferry ground troops ashore on remote islands, according to media reports. It will also include three Global Hawk surveillance drones, whose ability to hover at high altitudes for more than 30 hours will serve to strengthen Japan’s surveillance capabilities in the region.

The vote on the program follows China’s announcement last month of an East China Sea Air Defense Identification Zone near what it calls the Diaoyu Islands, which the Japanese call the Senkaku. This partially overlaps Japan’s own Air Identification Zone, which was established in the 1950s and covers a much larger area all around that nation.

A spokesman for Japan’s Defense Ministry declined to comment Monday on the reports about the equipment purchases.

The first foreign sale of the Osprey, built by Boeing and Bell Helicopter, is expected to be to Israel. Besides Japan, several other countries are said to be interested in the aircraft, whose versatility was demonstrated after Typhoon Haiyan in the Philippines.

Japanese forces that were deployed to Philippines alongside U.S. troops noted the smooth performance of Ospreys ferrying supplies and personnel between major hubs, such as Tacloban and isolated villages struggling to recover from the disaster.

Marine Corps Ospreys have been flying missions out of Guam over the Northern Marianas Islands this month as part of an exercise dubbed Forager Fury II.

Marine Aircraft Group 12 commander Col. Hunter Hobson said Monday that his forces have been doing a variety of training in the islands. The Marines have practiced conducting forward air control missions, providing close air support and interdicting and defending against enemy aircraft.

“This is the first time we included the Ospreys,” he said.

During Forager Fury II the Ospreys were used to practice evacuating casualties and rescuing downed airmen — a mission that was performed by the slower, twin-rotor CH-46 in past years, Hobson said.

“The problem is that (CH-46s) go slow and, because of that, they are in the target area and exposed to surface fire a lot longer,” he said.

The speed of the Ospreys means they can be escorted by F-18s, which fly too fast to follow a CH-46. The Ospreys can also range farther because, unlike CH-46s, they can refuel in flight, he said.

“It can go much deeper into enemy territory,” Hobson said.